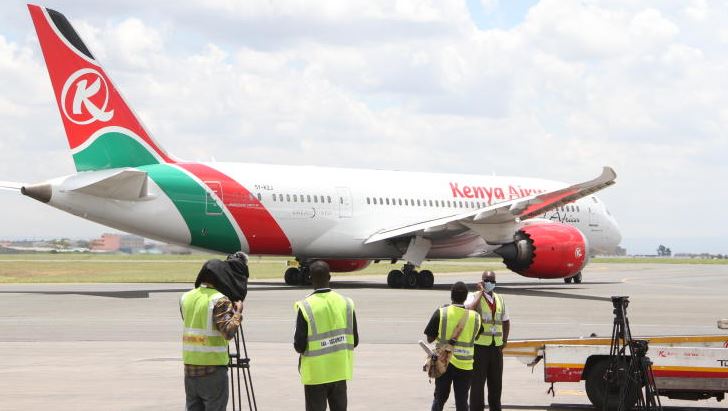 Transport CS James Macharia has flagged off the first Kenya Airways flight to Mombasa at exactly 10.10 am today, three months after flights into and out of the country were suspended.

Another flight has also landed in Kisumu,

Speaking at the airport Macharia said “We now look forward to the international flights but let’s make sure that these local flights are the benchmark of success. If we don’t do it correctly, the opportunity to fly internationally may be reversed,” he warned.

As early as 5.00 am on Wednesday morning, the Jomo Kenyatta International Airport (JKIA) in Nairobi was a beehive of activity as KQ, Jambojet and Safari-link geared up for the resumption of local flights following the suspension of flights due to the coronavirus pandemic.

Despite the cold weather, people from all over strolled in ready to experience the skies again.

KTN News reported that there were already long screening queues as airport authorities sought to take precautionary measures to ensure the safety of both the travellers and the crew.

As expected, no one is being allowed into the airport without wearing a mask.

There’s water and soap to wash your hands before the screening process begins, and someone to record your temperature.

The floors are marked with social distancing stickers to emphasise on the need of observing distance whilst you are being served, and stickers reminding you to wear a mask at all times.

Those who were at the airport early Wednesday morning say that the check-in process is slower than usual, what with all the safety measures in place.

Before boarding the plane, the airline crew remind you to keep your mask on.

There will be no social distancing observed inside the planes, instead, passengers will seat next to each other but are required to have a mask on for the duration of the flight. Authorities said that the air conditioning inside the planes is effective enough to ensure air circulation.

Last week in an announcement, Transport CS James Macharia said that airlines would not have to drastically reduce the number of passengers for them to fly, because if they carried less than 75 per cent of their passenger capacity, they would incur more losses.

All planes have gone through maintenance for the period they were grounded hence you can be assured of standard safety measures.

Since the onset of Covid-19 and the stoppage of flights, the national carrier KQ is estimated to have incurred 100M USD in losses.

It has only been operating cargo and repatriation flights for the last three months.

Tourism CS Najib Balala and other government officials are expected to grace an inaugural ceremony at the Moi Airport in Mombasa County.

The resumption of flights will boost the tourism sector that has incurred huge losses as international flights resume on August 1.