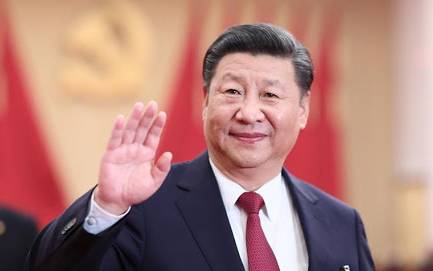 China has announced it will cancel interest-free loan of African countries that was originally due to mature by the end of 2020.

Speaking at the Extraordinary China-Africa Summit on Wednesday, President Xi Jinping said the Chinese government would cancel the debt owed by "relevant" African nations within the Forum on China-Africa Cooperation (FOCAC) framework.

President Xi (above) said the move was part of Beijing's efforts to relieve virus-stricken countries in financial distress.

Xi emphasised that the Chinese government would work with members of the G20 to help tide Africa over the global crisis and that the G20 should consider extending debt service suspension to hard-hit countries in other parts of the world.

He called for tighter cooperation between China and Africa on their response to Covid-19 as well as on innovations such as digital economy, smart cities, clean energy and 5G.

Meanwhile, the Chinese leader promised continual supplies of medical masks and epidemic prevention gear to the continent. He also pledged Beijing would ensure African countries are among the first to benefit from a Covid-19 vaccine as soon as it is approved.

According to State House, Xi urged African leaders to stick together in upholding multilateralism and oppose the politicisation and stigmatisation of the coronavirus pandemic.

Xi said China's support for Africa during the current health crisis will include debt relief in line with the G20 moratorium and the FOCAC framework.

President Uhuru Kenyatta thanked China for the Covid-19 related support given to African countries including Kenya.

President Xi congratulated Kenya for ensuring the uninterrupted flow of cargo from the Port of Mombasa into the East African hinterland via the Standard Gauge Railway.

A third of Kenya's all debt that fall due this year belong to China, with Kenya expected to hand in Sh78.4 billion this year.

Debt has risen to Sh6.2 trillion or 58 per cent of the country’s GDP. However last year, Parliament raised the debt ceiling to Sh9 trillion to allow government buy off expensive loans.

Treasury has downgraded this year’s economic growth outlook to between 1.8 and 2.5 per cent from the forecast six per cent.

David Ndii, an outspoken economist, said any interventions to support small and medium enterprises (SMEs) would be futile