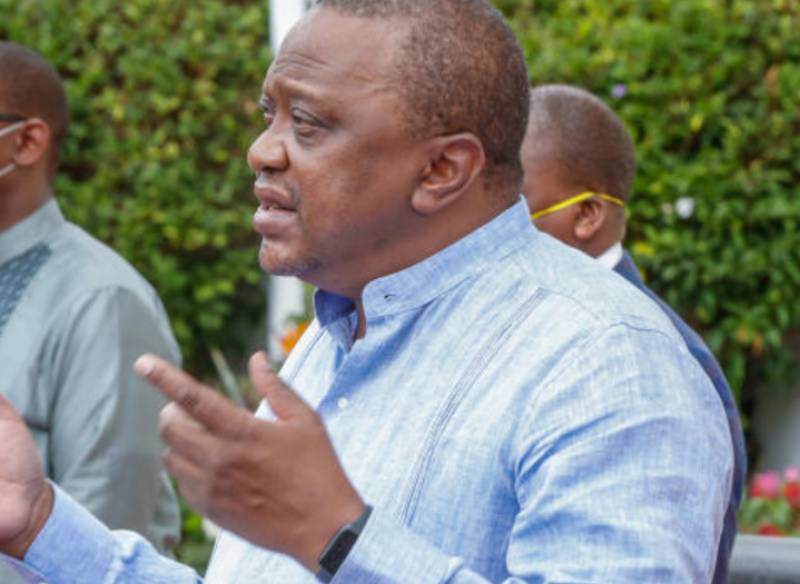 President Uhuru Kenyatta (pictured) has hinted at the possibility of re-opening the economy as he released an eight-point Sh53.7 billion economic stimulus programme to cushion Kenyans against effects of Covid-19.

The president said Sh5 billion has been set aside to hire local labour to assist in the rehabilitation of infrastructure across the country, which will include foot bridges and damaged access roads.

“We are convinced as a government that use of local labour and locally sourced construction materials will support micro and small businesses,” he said.

For the manufacturing sector, Sh600 million has been set aside to buy locally manufactured vehicles to protect jobs in the industry.

The agriculture sector will get Sh3 billion to acquire and supply farm inputs to 200,000 small scale farmers. “This is meant to cushion farmers from the effects of weather and to secure food supply chains in the Covid-19 period and into the future,” Uhuru said.

An additional Sh1.5 billion will also be released to assist flower and horticultural producers to access international markets during this period where there is a shortage of flights.

The Head of State said the programme will issue soft loans to hotels and related establishments through Tourism Finance Corporation while a total of Sh2 billion will be set aside to support renovation of facilities and restructuring of business operations.

Some funds will also be set aside to support operations of the country’s premier hospitality institution, Utalii College, to inject more well trained professionals.

The tourism sector will recruit 5,500 community scouts under Kenya Wildlife Service at a cost of Sh1 billion and a similar amount will go to 160 community conservancies.

The president said an additional Sh6.5 billion will be allocated to the Ministry of Education to hire 10,000 teachers and 1,000 ICT interns to support digital learning programmes. The money will also go towards buying 250,000 desks from local artisans.

“In regard to when schools will re-open, we will in the very near future be communicating what plans and programmes we have for the education sector,” he said.

The Head of State noted that Sh10 billion has been allocated to fast track payment of outstanding VAT refunds and other pending bills for small and medium enterprises.

“We released Sh30 billion yesterday towards payment of pending bills in the road sector,” he said.

Additionally, the government will inject Sh3 billion as seed capital through the SME Credit Guarantee Scheme.

Under the programme, the health sector will employ 5,000 more health workers with diploma and certificates on one-year contracts.

“This will not only enhance our Covid-19 response capability, but also enhance the implementation of the Universal Health Coverage programme,” he said. “Further, the stimulus programme will set aside Sh1.7 billion for the expansion of bed capacity in our public hospitals,” Uhuru added.

The programme will also seek to revamp the environment by minimising the effects of deforestation and climate change.

“My administration will rehabilitate wells, water pans, and underground tanks in the arid and semi-arid areas. For this purpose, we have set aside Sh850 million. A further Sh1 billion has also been set aside for flood control measures, and another Sh540 million for greening Kenya campaign,” he said.

The Head of State announced that the programme is running alongside the Kazi Mtaani initiative where the government plans to spend up to Sh10 billion in restoration of public hygiene standards.

The president noted that the government has been disbursing Sh250 million to vulnerable persons through mobile money to assist them during this period.

He defended the decision to send money directly to individuals as compared to buying food stuff, saying the latter method was hijacked by cartels and brokers. “So very little of the resources reached the intended group,” he said.

President Kenyatta said every country was struggling to get a way forward during this pandemic, and while he has no doubt Kenya will overcome, it does not seem fit to keep the country under lockdown.

He said he has communicated the same message to the relevant Cabinet Secretaries in the National Emergency Response Committee.

“The time has come to tell Kenyans that we cannot continue with lockdown. We cannot go on with living in curfew,” he said, as he announced that Covid-19 cases have hit 1,192 after 31 people tested positive. So far 57,650 samples have been tested.

The Head of State said despite the emphasis on the public to stay at home to curb spread of coronavirus, re-opening of the economy and resumption of normal activities was key.

“But if we open, then the disease spreads; let us all know that it will spread because we have not adhered to the measures, but if we do, we shall overcome. I have no doubt about that,” he said.

A week ago, the president extended the lockdown and cessation of movement in and out of Mandera, Nairobi Metropolitan, Mombasa, Kilifi, Kwale and Mombasa counties until June 6.

The dusk-to-dawn curfew was also extended to June 6.

The president said his administration was aware of the adverse effects of the pandemic on Kenyans, hence the economic stimulus programme. He implored Parliament to appropriate the necessary budget.