KFS dismisses claims of destruction in parts of Kinale forest

The Kenya Forest Service has dismissed as inaccurate images circulating on social media that a portion of Kinale Forest has been deforested.

In a statement, the service clarified that the portion on the left side (outward bound) depicted, as a human settlement is not part of the gazette forest area.

“Therefore, the Service wishes to refute claims on social media that a portion of Kinale Forest has been deforested or settled as observed from an aerial photo circulating online, the same photo that was in circulation in 2018,” said KFS.

“There is no case of forest destruction or mismanagement in Kinale Forest as the proponents of the image circulating on social media would wish to portray. Indeed, it is a case of the Service path towards sustainable management and protection of forest resources.”

Community vows not to leave forest despite order

Kinale Forest Station in Kiambu County covers a total of 10,504.87 hectares and it is located along the Nairobi Naivasha highway. The forest comprises of 4,914.32 hectares of indigenous forests and 1,634.8 hectares of Plantation forests. There is also bushland, bamboo area, and grassland, which cover 3,955.75 hectares.
During the current ongoing rainfall season, the forest station is planting trees on 97.4 hectares using the PELIS system in collaboration with the 2KK Thiririka Community Forest Association (CFA), which has over 1000 registered members.

PELIS is a system that boosts livelihoods of forest adjacent communities and is one of the methods the Service utilizes to meet its targets in reforestation of gazetted forest blocks.

Currently, land preparation and staking by CFA members are ongoing and tree planting will commence the week starting May 4. 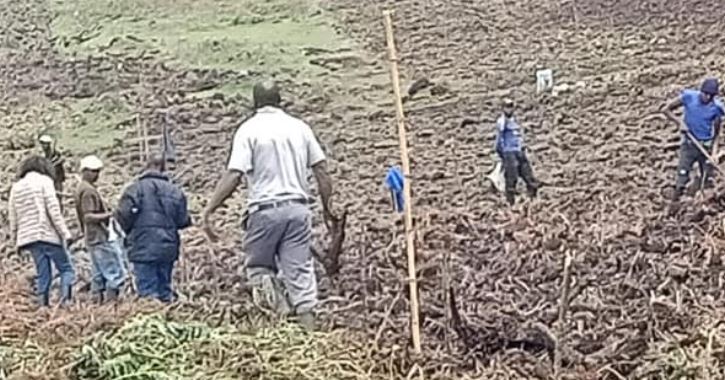 While partaking in the exercise, the PS emphasized on the importance of Kenyans taking advantage of the current rains to plant trees at family levels and in their private farmlands (while observing social distance) to boost the country's forest cover to the desired 10 per cent by 2022.

He also pointed out an elaborate plan by MEF in conjunction with the Ministry of Interior and Coordination of National Government on a countrywide program for tree planting to ensure Kenyans plant trees at clearly designated areas.

The PS also noted that all Ministries and State Agencies would actively participate in tree planting on designated forest blocks.

On his part, the CCF outlined the protocol for conducting tree-planting activities, in the light of coronavirus pandemic across the country. He also urged Kenyans to actively take up tree planting during this rainy season and that way; "Secure the future of our country."

The CCF also recognised the positive mentality of Kenyans who have continued to show good willing by planting trees while observing safety regulations against the spread of coronavirus.

The tree planting activity brought together staff from Kenya Forest Service and the Friends of Karura Community Forest Association.

The company is already exporting the PPEs to East and Central African countries.