Reprieve for motorists as damaged bridge is reopened 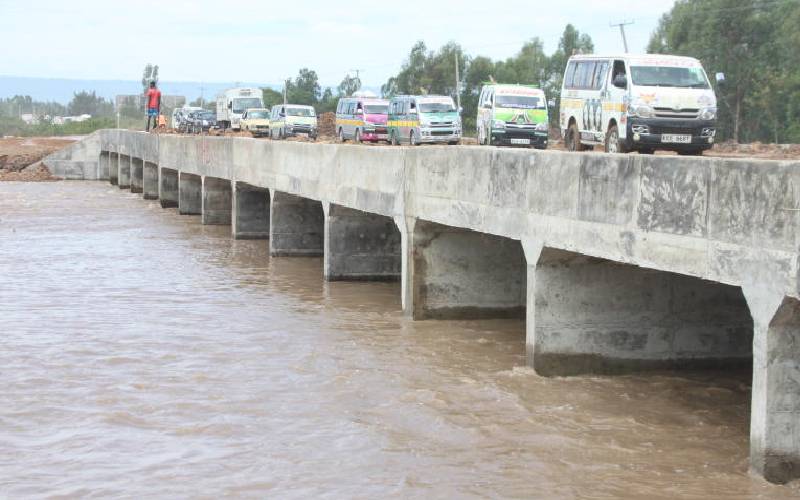 Motorists travelling from Kisumu to the southern parts of Nyanza can now breathe a sigh of relief after Ayweyo Bridge, which had been cut off by floods, was reopened.

Engineer Harison Gakuo said yesterday the bridge was ready for use. Already, vehicles weighing 10 tonnes and below have been allowed to use it. “Because the curing process of the slab is still on, we had to regulate the kind of vehicles using the bridge for a period of time to ensure everything is fine,” said Gakuo.

Repair works at the bridge have been going on for the last four weeks. Motorists have had to cover an extra 30 kilometres through the rugged Ahero-Awasi-Katito road in order to access the region. For the past one month, motorists have been counting losses due to the bad state the Awasi and Katito roads are in. While some decided to pull their cars off the road, others transferred the extra cost of maintenance to travellers.

Fare from Kisumu to Katito had doubled from Sh150 to Sh300, but starting yesterday, many operators began readjusting to the usual amount.

The bridge is part of the 84-kilometre Kisii-Ahero road being constructed by China City Construction Group and funded by the African Development Bank, the European Union and the Government of Kenya.

Yesterday, Gakuo said the road was 60 per cent done, with at least 50 kilometres already tarmacked. The Sh9.4 billion project is set to be completed by September, with Gakuo noting that the unexpected January and February rains slowed down the work.

By Brenda Kerubo | 7 hours ago

By James Wanzala | 17 hours ago