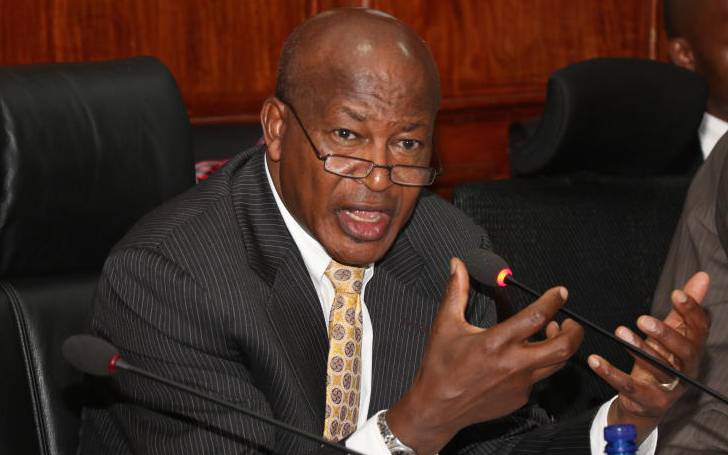 Attorney-General Kihara Kariuki (pictured) has disowned the Sh63 billion Managed Equipment Services (MES) scheme’s contracts, saying his office was not involved in their negotiation and drafting as required by law.

The AG said his office was kept in the dark as the Ministry of Health went into agreements with foreign and local companies for the leasing of medical equipment under the MES programme.

The agreements are now at the centre of a probe by investigating agencies and Parliament.

Mr Kariuki further said that on evaluating one of the contracts, he realised that it contained terms that were highly skewed against the government, exposing the State to litigation for compensations in the event the tender was cancelled.

The AG said other clauses of the contract he had seen were not based on the contents of tender documents, as required by procurement law, thus making them illegal.

Through Solicitor General Kennedy Ogeto, who appeared before the Senate committee probing the suspected scandal on the leasing of the equipment, the AG’s office delved into the Health Cover Information Technology (HCIT) contract.

Signed between the Health ministry and Seven Seas Technologies, Mr Ogeto revealed that the government had been left greatly exposed as the agreement was grossly skewed in favour of the contractor.

“There is a serious problem there (at the Ministry of Health). Unfortunately, at the end of the day, we are the ones who will carry the skunk if the contractor moves to court demanding compensation for the terminated contract, yet this would have been avoided if we were allowed in the contract negotiations,” said the solicitor general.

He added that despite legal advice to ministries and departments that the AG’s office must be involved in negotiations, drafting, vetting and interpreting of all agreements, their offices were suspiciously kept in the dark on all MES contracts.

Ogeto told the Senate ad-hoc committee that the Health ministry further went ahead and signed the MES contracts without the same being reviewed by the AG, as required by the law, exposing the government to possible legal consequences.

Such consequences are manifest in the current situation where the government is at the risk of now paying Sh3.9 billion to Seven Seas Technologies for termination of its HCIT contract.

“The office of the Attorney General became aware of the existence of this contract after the National Treasury wrote to us on December 14, 2017, yet by then they had already signed on October 2. Treasury was seeking legal clearance to issue a Government Letter of Support in respect of the contract. That is how we got to know of the contract,” Ogeto said.

He said the clause was not based on the initial tender documents. Ogeto added that while the draft contract provided for the contract’s termination for convenience – hence allowing the procuring entity to terminate the agreement by notice at any time – a “prejudicial” clause was introduced later, skewed in favour of the contractor.

“This clause requires the ministry to pay the contractor not only for the services already undertaken at the time of the termination, but also an additional amount equivalent to 80 per cent of the remaining outstanding contractor’s fees,” revealed Ogeto.

The solicitor general further said the clause had eroded the ministry’s right to terminate for convenience.

“There was no basis in the tender documents to support the above-quoted highly unconscionable and oppressive clause, which was consequently an illegality,” added the AG’s office.

Yesterday, it emerged that the suspicious clause was inserted into the contract at a meeting held in Naivasha, just days before the contract was signed.

Though Ogeto revealed that the Directorate of Criminal Investigations (DCI) was already investigating elements of the procurement of the contracts, he could not confirm if this was one of the issues under probe after being pressed by Bungoma Senator Moses Wetang’ula.

He further said the Health ministry did not conduct due diligence and value for money assessments as required by law, especially since Seven Seas Technologies was picked to go for financial evaluations as the only bidder after five other companies were knocked out at the technical stage.

“Apart from not conducting the due diligence as required by law, the ministry was expected to have visited three sites where the bidder has completed similar works. There is no evidence that these visits were conducted. I will say the procurement process fell short of due diligence and value for money assessment,” said Ogeto.

He added that it is such skewed contracts that are exploited by companies that, once their contracts are terminated, sue the government.

He disclosed that the government is currently facing Sh168 billion in pending legal bills arising out of court judgements against it.

“The committee should note that these pending legal bills are the result of poor contract management, and contracts that contain terms that are skewed against the government.”

Earlier, outgoing Health Cabinet Secretary Sicily Kariuki drew the wrath of the committee after she failed to appear before it over the Seven Seas Technologies contract.

The committee directed that the CS appear before them today at 9am, failure to which they threatened to issue summons against her.

Kenyan taxpayers have lost billions of shillings in the government’s Managed Equipment Services (MES) programme, a new report has shown.

By Dominic Omondi | 44 minutes ago