Footbridges to be BRT stop points 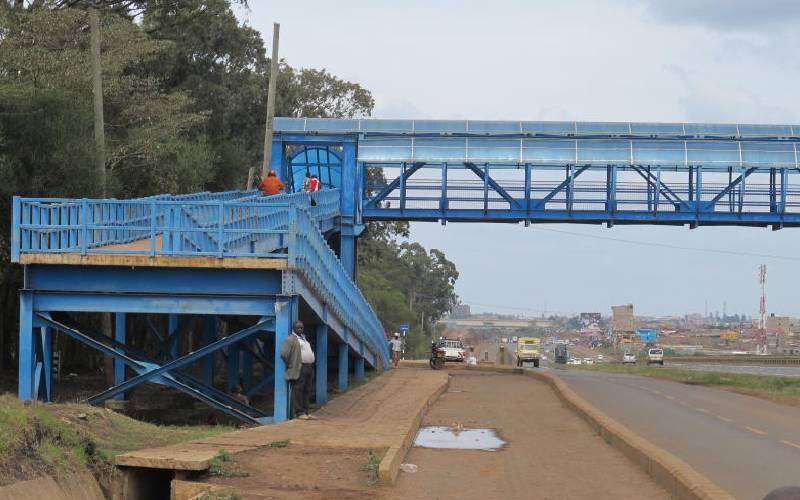 The existing footbridges on Thika Road will serve as pick-up and drop off points for the planned bus rapid transit system (BRT).

The first phase of the system, which has been in the works for some time but failed to kick-off, is set to have 10 of these ‘bus stages’ between Kenyatta University and Ngara.

The footbridges include some that have been under construction for more than two years now.

This is according to the Nairobi Metropolitan Authority (Namata). The agency, in a document inviting firms to bid for the job of putting up the BRT infrastructure, said the contractor to be selected for the job would be required to modify the footbridges to serve as passenger stations.

Namata said among the key undertakings by the contractor will include “a detailed engineering design for modification of 10 existing footbridges to serve as access to BRT picking points and stations”.

Among those footbridges that will be used include one at Garden City and the Kenya School of Monetary Studies, which are among the four pedestrian crossing points that have been under construction since August 2017.

The contractor will also be required to put up three more footbridges. “The picking points and BRT stations will be developed as part of the infrastructure to facilitate the implementation of the BRT system on the highway by Namata,” noted the agency.

The authority started the search for a firm to undertake the works in November last year, with the bidders initially expected to have submitted their bids by January 9, this year. Namata, however, extended the submission date to January 27.

The BRT infrastructure is expected to cost about Sh900 million. Another Sh800 million will be used for the acquisition of high capacity buses. Other phases are expected to follow. The government had identified four other corridors.

Namata said the selection of the supplier of the buses would be done competitively once the infrastructure was in place.

Justice Weldon Korir said amendments to the order were done in consultation with all stakeholders, hence could not be faulted