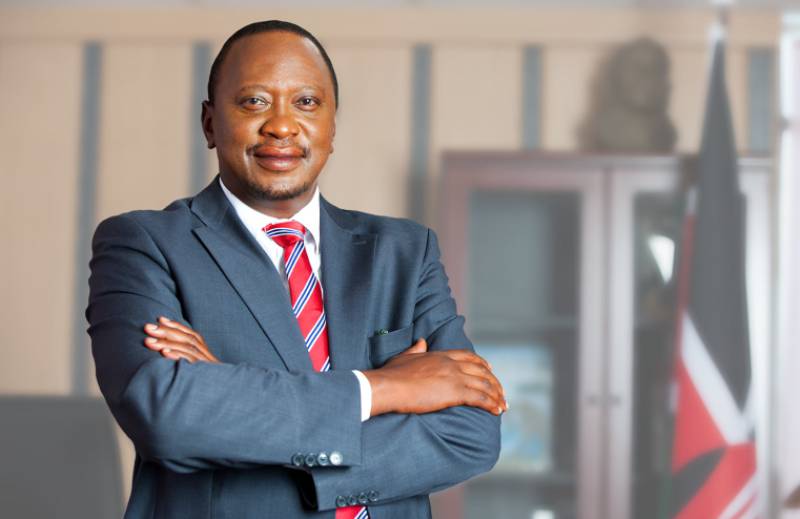 By August 2019, President Uhuru Kenyatta’s trip to Barbados saw him cross the 100 mark on official trips to foreign countries eclipsing the 33 trips made by his predecessor Mwai Kibaki during his two terms in office.

In the trips across the globe, Uhuru has gone to over 45 countries including several trips to Ethiopia, Rwanda, Uganda, Tanzania, South Africa, South Sudan, and the United Kingdom. During the first term alone, President Kenyatta travelled to 86 capital cities with 2015 being the busiest with the president making 26 trips.

Ethiopia, Uganda, Tanzania, UK, China, Rwanda and Somalia were the president’s favoured destinations. He has visited Addis Abba, Ethiopia’s capital 14 times in seven years, followed by nine trips to Kampala, Uganda; eight visits to Kigali, Rwanda including one just last month. He has been to Tanzania eight times as well.

Others that he has visited twice include Angola, Belgium, Canada, Democratic Republic of the Congo, France, Ghana, India, Italy, Nigeria, the United States and Zambia.

Here’s a list of the countries Uhuru has visited in 2019, and the ‘goodies’ he brought home from each:

President Uhuru went on a State visit to Namibia he was hosted at State House, Windhoek, where he held bilateral talks with President Hage Geingob.

He was also the Chief Guest at the 29th Namibia Independence Day celebrations.

The main purpose of this particular visit was on matters blue economy and how to take stronger steps to benefit from marine resources.

“We are here to learn from how Namibia is benefiting from its blue economy even as we continue to support and partner with them in various other fields,” said President Kenyatta.

Uhuru toured Seaflower Pelagic Processing factory in Walvis Bay, Namibia, which has the distinction of being the biggest fish-freezing factory in Africa. The factory was set up recently at the cost of USD40 million (about Sh4 billion) through a partnership between the Namibian Government and a private investor. The factory freezes 600 tonnes of fish on a daily basis and has created jobs for 700 people.

The President instructed Agriculture CS Mwangi Kiunjuri and Trade and Industry CS Peter Munya to immediately take steps to learn from the Namibian experience so that Kenya can have a similar factory.

President Uhuru was in China for the second Belt and Road Initiative (BRI) forum.

He witnessed the signing of the deals that will be fulfilled through concessional financing and Public Private-Partnership (PPP).

Kenya also landed a lucrative deal that will see farmers export their avocado produce to China. The deal, which makes Kenya the first African nation to export avocados to China with a market of over 1.4 billion consumers, was signed by President Uhuru Kenyatta and his Chinese counterpart Xi Jinping in Beijing.

In August 2019, President Uhuru Kenyatta was received by Prime Minister Andrew Holness and Governor General Patrick Allen of Jamaica on landing in Kingston. A colourful state reception that included a Guard of Honour mounted by the Jamaica Defence Forces was held in his honour.

During the meeting, plans to introduce air transport connections between Kenya and Jamaica were discussed, with President Uhuru noting that encouraging more trade and deepening commercial ties will strengthen the partnership between the two nations.

President Uhuru pointed out that Kenya serves as a hub for logistics and transport, financial services, ICT innovations, as he encouraged Jamaican investors to come to Kenya.

There were MoUs signed on technical cooperation in tourism and in the fields of sports, culture and heritage as well as a framework of cooperation between the two governments and an MoU on political consultations.

The two leaders also noted that there was need to strengthen cooperation between Kenya and Jamaica in the blue economy, which they said holds tremendous potential for wealth and job creation.

President Uhuru met Prime Shinzo Abe on the sidelines of the TICAD 7 conference in Yokohama, Japan.

On the Special Economic Zone (SEZ) in Dongo Kundu, the two leaders agreed that with the support of the Japanese government, Kenya will fast track the commencement of the SEZ as well as the construction of the Likoni Gate bridge.

Other matters that featured prominently during the talks included regional peace and security, sustainable blue economy and the need to address the trade imbalance between the two countries that is currently in favour of Japan.

President Uhuru thanked Prime Minister Abe for hosting TICAD 6 in Kenya in 2016 saying the conference helped raise the country’s profile as an investment destination of choice on the African continent. He noted that in the last 3 years, the number of Japanese companies setting shop in in the country significantly rose from 41 to 57, a feat he termed as a success indicator of the growing bilateral ties between Tokyo and Nairobi.

Side meetings in Japan

While still in Japan, President Uhuru held side meetings with UN Secretary General, Antonio Guterres on regional peace and security in the Eastern Africa region. He invited Guterres to the UN Oceans Conference that Kenya will co-host with Portugal in Lisbon between June 2 and 6, 2020.

He also separately held talks with President Yoweri Museveni of Uganda and Prime Minister Pravind Jugnauth of Mauritius. PM Jugnauth assured President Uhuru of his country's support for Kenya's bid for a non-permanent seat on the UN Security Council when elections are held in June 2020.

The two leaders further agreed to conclude discussions on the “Avoidance of Double Tax Agreement” between the two countries by mid-September and sign a Memorandum of Understanding on Standards by end of September 2019.

President Uhuru attended the United Nations General Assembly (UNGA) in New York where he rallied world leaders to unite towards sustainable ocean economy during a high-level panel discussion on sustainable ocean economy held on the sidelines. He cautioned against human actions that threaten the wellbeing of oceans saying the water bodies hold huge economic potential with an asset base estimated to be over USD24 trillion.

Kenya and Portugal will co-host the next UN Ocean Conference in June 2020.

Uhuru asked US investors to make Kenya their investment destination of choice in Africa. The President said his administration's Big 4 Agenda, particularly the manufacturing component where the Government's plan is to lift the sector's contribution to the economy from the current 8.4 percent of GDP to 15 percent by 2022, offers limitless investment opportunities for US companies.

Alongside manufacturing, the President said food and nutrition security, affordable housing and Universal Health Coverage (UHC) are other priority sectors with huge investment potential. He said his administration's target of constructing 500,000 affordable housing units is on course and rallied the American companies to channel their resources into the program.

He advised the American business community to pay particular attention to Kenya's financial sector where the country is a renown for its world class mobile money solutions.

Side meetings in New York

Uhuru held separate talks with the President of Hungary Janis Ader and the Director General of United Nations Industrial Development Organization (UNIDO) LI Yong. They discussed several matters of bilateral and multilateral interest between the two countries including trade and people-to-people interactions.

They also talked about Kenya's bid for a non-permanent seat on the UN Security Council for the period 2021 to 2022 which the Hungarian leader assured of his country’s support.

He joined other world leaders for a dialogue with the UN Secretary General Antonio Guterres on counter terrorism where he restated Kenya's support for the Christchurch Call, a global initiative spearheaded by France and New Zealand aimed at stopping the use of internet to propagate violent extremism and terrorism.

He had separate bilateral talks with the President of Portugal Marcelo Rebelo de Souza and the Prime Minister of Denmark Mette Frederiksen on the sidelines of UNGA. They discussed matters of mutual interest between Kenya and their respective countries among them trade, investments and people-to-people interactions as well as Kenya's bid for a non-permanent seat on the UN Security Council for the period 2021 to 2022.

The president also met with his Somalia and Djibouti counterparts Mohamed Abdullahi Mohamed and Ismail Omar Guelleh respectively. During the meetings, they discussed matters of mutual interest to the sister nations and the African continent as a whole.

President Uhuru was among the over 170 world leaders who witnessed the best of Japanese cultural heritage at the grand Enthronement Ceremony of Emperor Naruhito.

“The presence of His Excellency the President and Her Excellency the First Lady at this very important ceremony for Japan is a reflection of the time-tested relationship between Kenya and Japan that has grown stronger over the years,” Kenya’s envoy to Japan Amb. Solomon Maina said.

President Vladimir Putin hosted the first Africa-Russia Summit in the Black Sea Resort of Sochi. The meeting brought together over 30 Heads of State. Peace, security and trade were the overriding topics during the summit.

President Uhuru said the summit is a turning point in the history of Russia-Africa relations since it creates a new platform for crafting new mechanisms of cooperation between the two regions. He added that transnational security challenges such as piracy, terrorism cyber security and trafficking can only be tackled through cooperation and partnerships amongst world nations.

Uhuru called on Russia to use its influence to ensure that AMISOM gets UN funding.

He urged Russia's private sector to take full advantage of the improving business environment in Africa to invest more on the continent.

President Putin said the summit, which would be held after every three years, will be used as a vehicle to deepen and strengthen Russia-Africa ties with the overall objective of achieving sustainable global peace, security and development. He pledged to continue supporting African nations in seeking solutions to their challenges.

Uhuru also lobbied the summit to support the country’s candidature for a non-permanent seat on UN Security Council during elections slated for June next year.

Russia and Kenya resolved to establish a Russia-Kenya business council to oversee the implementation of joint trade and investment programmes.

President Uhuru held talks with His Majesty King Abdullah II of Jordan where the two leaders discussed the progress in trade and bilateral relations between the two countries.

The leaders, who want their two countries to establish special status relations, directed their respective ministries to fast track the implementation of bilateral trade agreements

President Uhuru and King Abdullah II also discussed the progress by their respective nations in the achievement of the Sustainable Development Goals.

They met on the sidelines of the Future Investment Initiative (FII), a global financial conference being hosted in Saudi Arabia where 40 countries are taking part.

They also discussed cooperation between Kenya and Jordan in measures to confront radicalisation.

Government has failed to set producer prices for the current season harvest leading to exploitation of locals.