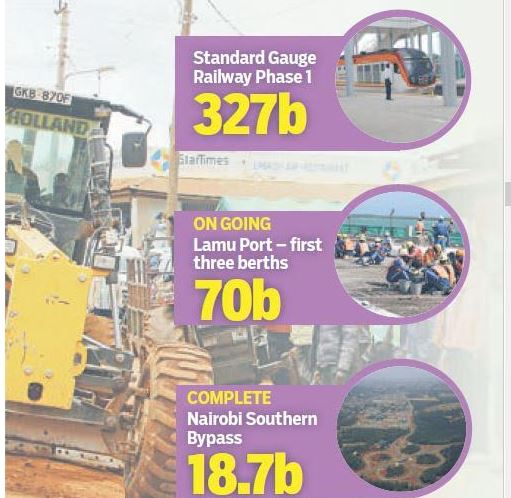 Kenya’s economic growth has to a large extent been driven by investments in infrastructure for several years now.

While the last decade has witnessed a leap in new and better roads, railway, power projects and other infrastructure after years of under-investment, the billions appear not to translate to much returns for Kenyan businesses.

Among key challenges to ensuring a trickle-down effect has been how the debt-funded mega projects are implemented.

For instance, with the Chinese-funded projects such as the Standard Gauge Railway (SGR), the Exim Bank of China channels the money directly to the contractor, which would mean the money largely goes to the Chinese firms and not local ones as they are mostly sub-contractors.

Then there is the matter of importing labour, materials and equipment, locking out local suppliers who are mostly sub-contracted for low-priced jobs.

A September review by the World Bank noted the central role of these projects in Kenya’s growth this year would be “driven by ongoing key investment to support the implementation of the Big Four development agenda.”

While the projects are yet to make a mark, they have drawn substantial attention, which is evident in the slashing of budgetary allocation to some ministries, with additional resources directed to those that house the housing, healthcare, manufacturing and food security functions.

The big-ticket, infrastructure-fuelled growth is seen as the root of many evils in the government. Other than providing greedy state officials an avenue for getting kickbacks, it is partly being blamed for the problems that the economy is experiencing currently.

Reacting to announcements of possible layoffs of civil servants as the government tries to bring down the public wage bill to 35 per cent of the tax revenues from the current 48 per cent, the Central Organisation of Trade Unions (Cotu) noted that cutting employees’ perks would not cure the problems that the economy faces.

The umbrella for unions in the country cited the spending on mega projects as among the key problems afflicting the economy.

“From where we sit, the issue of rampant corruption in this county and giving priority to projects that have no short-term gains particularly on infrastructural development is the cause of the current problem, and unless the government finds ways of addressing the real issues, no meaningful solution will be found,” said Cotu Deputy Secretary General Benson Okwaro.

The government, it would appear, has focused little on the “smaller” projects that would impact the life of the man on the streets.

Even in the case of agriculture and food security that can be achieved by focusing on the smallholder farmers, the government has instead opted for the grandiose Galana Kulalu Irrigation Project.

“There is a need to move the economic bias from big-ticket infrastructure to a strategy that has a more Kenya first approach. This is what happens the world over, where governments are nationalistic and take care of the interests of their people first,” said a former Treasury insider who requested anonymity as he still consults for the ministry.

He noted that while such projects are critical, the country does not need to compensate for the years of under investment at one go.

“For instance, the building of an expressway for Sh200 billion will not have much impact on the ordinary Kenyan,” said the official.

“Other than a few thousand people that the project will employ during the construction phase, a lot of the money will be retained by the contractor. Take the same money and for, instance, lend it to Kenyan small and medium enterprises at friendly rates and the impact will be visible. And in a few years, this money will have repaid itself several times over. Yes, we need roads and rails, but perhaps we are taking too much at a time.”

Such basic projects have had a far-reaching impact on the economy and the common mwananchi.

These include the Kenya Youth Empowerment Programme (KYEP) that offered labour-intensive jobs to young people and the Youth Enterprise Development Fund, which offers credit to businesses run by the youth.

While it may have had its faults, KYEP - popularly known as as the Kazi Kwa Vijana initiative - had a major impact on the country’s economy.

Coming at a time when the country was struggling to recover from the post-election crisis of the late 2007 and early 2008, the programme stood out as a major stimulant to the economy.

It was, however, rocked by corruption allegation, with senior state officials – wealthy ones for that matter – lining their pockets with the money that was meant for the youth.

The theft saw Kenyans, tongue-in-cheek christen the programme Kazi Kwa Vijana, Pesa Kwa Wazee, loosely translated as the youth work, the old guard gets paid. The governance issues saw the World Bank stop funding to the programme owing to a series of expenditure that could not be explained.

The global lender had offered to support the programme with a grant of up to Sh4.9 billion, while the government had set aside Sh1.8 billion.

The initiative has since been abandoned.

KYEP was a Marshal Plan of sorts that President Mwai Kibaki government developed in 2007 to address youth unemployment.

It was launched in April 2009, putting money into the pockets of Kenyans at a time when the economy was hurting and had nearly ground to a halt.

The Youth Enterprise Fund, a revolving kitty which advances money to businesses owned and run by young people, has also had its fair share of successes in terms of nurturing and financing small and medium enterprises.

Though it has also been dogged by bad governance, the fund has over the last 12 years advanced Sh12.8 billion to about 1.2 million youth-led enterprises.

The cadre of its borrowers was in the past deemed too risky by anks. It advances loans at an interest rate of six per cent compared to banks’ lending rates of 13 per cent currently.

And depending on borrowers’ record, they can access a credit facility of up to Sh5 million. The fund was set up with a seed capital of Sh1 billion from the Treasury, with subsequent allocation increasing to Sh3.8 billion as of May this year.

While analysts agree that the country needs to build mega projects such as roads and ports, they note that the country cannot possibly do it overnight and should instead stagger them and spare some funds for grassroots projects.

“Much of the infrastructure investment such as the SGR and the major highways have no bearing towards youth in terms of empowering them through job creation. At the commencement of SGR construction, the Chinese came with their labour and we injected huge capital whose returns are not even there and the spillovers are not being felt,” said Dr Samuel Nyandemo, a senior economics lecturer at the University of Nairobi.

“While they are necessary, the returns for these projects will take years to be realised. The SGR is not likely to repay itself soon. It was a mismatch when you look at it from the perspective of what it should have done for the youths and the overall spillover to the economy.”

He said the government should instead have invested the money in building feeder roads and upgrading existing ones so that they can link with the railway and the main highways.

Mr Nyandemo noted that such “smaller” roads have the effect of opening up the regions, with the multiplier effect of more markets for local producers.

He, however, noted that the Big Four agenda offers the government an opportunity to redeem itself in terms of a deeper engagement with local businesses.

“If you look at housing under Big Four, the government should engage the youth in meeting the obligation for housing. It is labour-intensive and can offer jobs to many people. Let’s give these businesses the start-up capital so that they can supply materials for these projects,” he said.

The Government has been implementing major agricultural projects, with the most visible being Galana Kulalu. Despite spending billions of shillings over the last six years, the project has so far not brought any tangible harvest.

Timothy Njagi, a research fellow at Tegemeo Institute of Agricultural Policy and Development, attributed the failure of the big agricultural projects to poor governance, noting that if implemented well, they can impact the economy substantially.

Dr Njagi cited several smallholder farmers-led projects that are thriving with little assistance from the government and development organisations.

“The large-scale irrigation schemes work, and if well managed, they can generate better returns. The problem is there is a lot of room for bad governance,” he said.

“One of the biggest disappointments is that when you try to do a cost-benefit analysis, you find that it is going to be negative because of the governance issues.”