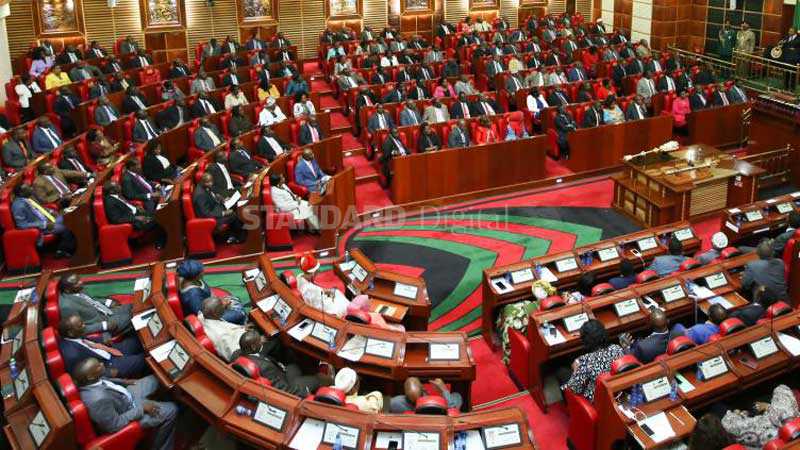 Members of Parliament ignored expert advice to raise the country’s debt ceiling to Sh9 trillion, minutes of the committee on Delegated Legislation that considered the Treasury proposal show.

The committee proceedings indicate that the Parliamentary Budget Office (PBO), an independent think-tank of economic experts that advises MPs, raised a red flag on the issue.

The warning was not taken into account in the final report that was approved by MPs on Wednesday.

The team warned that raising the ceiling would undermine the country’s budget credibility.

It also noted that the country was not generating enough revenue to service its debt, which means the Government will not be borrowing for development, but to repay old debts, whose benefits are barely felt by ordinary Kenyans.

“Currently, the country has surpassed some of the debt sustainability thresholds. This implies that the country is not generating enough revenue to cover the debt service requirements. The risk is that the country will continue to borrow to repay the existing debts and not for development expenditure,” the PBO warned.

The parliamentary budget mandarins also said raising the ceiling “will reduce the flexibility in the budget, as debt repayment, which is a first charge to the consolidated fund, will increase.”

This means the Government will find it difficult to finance projects as it struggles to repay debts.

Despite these arguments, Parliament revised a requirement that public debt be pegged at 50 per cent of the country’s Gross Domestic Product (GDP).

The Government is already bogged down by a Sh5.8 trillion debt, which is much higher that the allowable threshold.

At the heart of the Government desire to have the ceiling raised is to refinance older expensive commercial loans and take cheaper ones from multilateral financial institutions such as World Bank.

The Government is already in talks with the Bretton Woods institutions to refinance some of the commercial loans.

“The portfolio that are hurting the Government are the commercial loans that need to be retired. The reason the Government ran away from concessionary loans is that Bretton Woods disclosure requirements are very high,” explained National Assembly Minority leader John Mbadi yesterday.

Economic experts who spoke to The Standard, however, raised fear that the move by Parliament could open doors for wanton Government borrowing.

Former chairperson of the Senate Finance Committee Billow Kerrow termed the step a disaster, warning: “Given the history of this government’s appetite for loans, giving them the ceiling means they have another opportunity to borrow more money... It is disaster. These guys have appetite for spending without any impact on economy. When you put money into development, there will be higher growth. For the last seven years, they borrowed trillions but the economy is on its knees”.

He added: “Before this Government, there was Vision 2030, which was clear on the country’s economic road-map. The Government simply started doing their own things. You should not burden the country because you want to spend on projects. It is not a justifiable reason.”

“The National Assembly failed to oversight Government on loans. Instead of holding them to account, they give them a blank cheque. Treasury does not seek approval before taking loans. They just get loans and seek regularisation later. It is a disaster,” he said.

Joy Mueni of the University of Nairobi said: “We are accruing more bad debts overtime. When you start borrowing to pay older debts, it is risky, and the more we borrow, the more we get exposed to world financial shocks,” said Dr Mueni.

A report by Gengis Capital Investment Bank said more focus should be placed on debt sustainability.

“In as much as the proposed amendment is towards a public debt ceiling, focus should not be lost on the IMF debt sustainability analysis framework, and more importantly, sustainability of external debt,” said the report.

Kenya attracted more than half of East Africa’s financial deals in the first eight months of this year.

By Julius Chepkwony and Yvonne Chepkwony | 8 hours ago