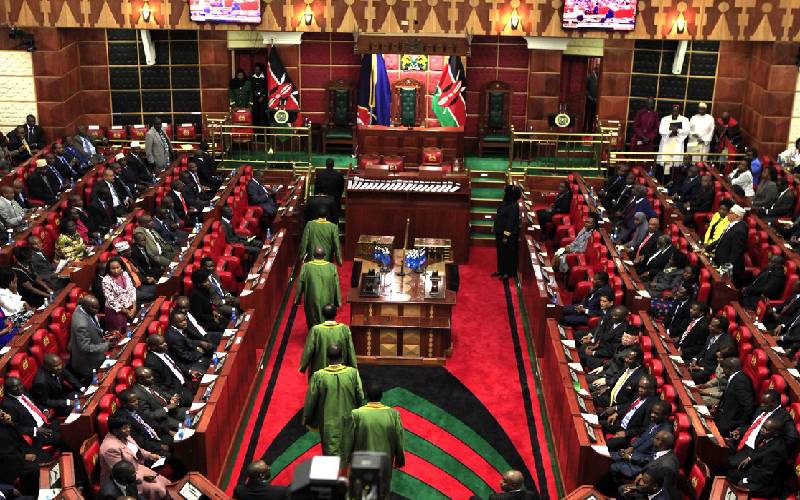 The Government is seeking parliamentary approval for Sh3.48 billion towards the controversial Kimwarer dam project, under supplementary estimates to be tabled in the National Assembly in the next few days.

The money is part of Sh95 billion included in the additional budget, according to confidential documents before the National Assembly Budget and Appropriations Committee.

The documents show that the Treasury wants lawmakers to regularise the payment for the project that is under investigation by the Directorate of Criminal Investigation (DCI).

It is not clear if the money is part of the advance payments already wired to the contractor for the dam or additional payment for the development that has seen National Treasury CS Henry Rotich record a statement with the DCI.

Investigative agencies are on the trail of billions allegedly paid for Kimwarer and Arror dams in Elgeyo Marakwet County. The dams were expected to prove hydo-power and water for irrigation for residents of the region, but ran into trouble when it emerged that money had been paid for non-existent projects.

The Treasury has admitted that Sh7.8 billion was paid as advance payment for the dams. The money, according to Mr Rotich, was paid under a facility agreement and commercial contract signed between the Kerio Valley Development Authority and the contractor, Service Assicurativi Del Comercio Estero (SACE) of Italy.

Approval for the payments means that the Treasury will succeed in covering its tracks in the ongoing investigations.

Although the law allows the Government to spend money on emergency projects and later seek approval from the House, a look at majority of the projects listed in supplementary shows that not all were ‘emergency or unforeseen.’

The largest chuck of the money sought by the Treasury is towards payment of pending bills for the construction of the Standard Gauge Railway (Sh50 billion).

Others are Technical and Vocational Education and Training Authority (Sh1 billion), maize payments to farmers (Sh2.1 billion) and another Sh 1 billion drawn from the Contingency Fund to cater for victims of last year’s floods.

There is also payment for lawyers representing the country in the ongoing maritime dispute between Kenya and Somalia, among other items.

Money sought by the Ministry of Foreign Affairs is for expenses during the blue economy conference that took place last year. The conference is estimated to have cost roughly Sh800 million.

Members of the Budget committee who met yesterday expressed concern over items in the supplementary budget, arguing that the committee is toothless in dealing with the Treasury, which is in the habit of asking Parliament to approve money already spent or listing items that do not fall under emergencies.

Members were also concerned that the Treasury has been tabling the supplementary too close to the main budget.

“What teeth does this committee have against Treasury? We are repeating the same mistakes. What are the powers of this committee on these breaches,” asked Mark Nyamita (Uriri).

Makali Mulu (Kitui Central) argued that it is unreasonable to present a supplementary budget just two months before the main budget.

He said ‘the committee has powers to bite,” noting that only two items in the proposed supplementary meet the ‘emergency’ threshold anticipated in law.

City Hall on the spot over title deeds

The lease documents are required by the ministry of land to process title deeds.

By Macharia Kamau and Wainaina Wambu | 16 hours ago