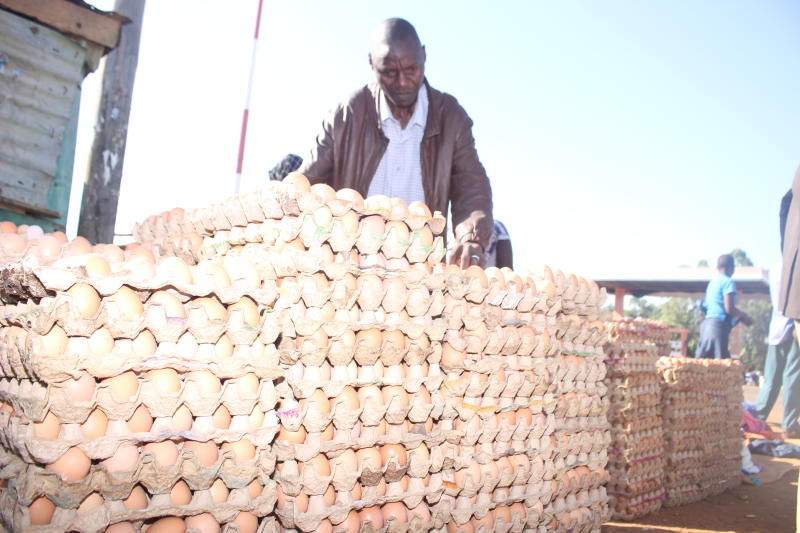 How do you win over a customer when your product is exactly similar, in plenty and is going at the same price as that of your competitor?

Mama wa Quail does it by grabbing the hand of a woman walking towards an iron sheet shade at Wangige market and tries to fend off other traders by claiming the customer saw her eggs first.

Trays upon trays of eggs rise in columns among the women traders. The customers that some few months ago would be trooping in droves to buy them have reduced drastically, leaving a feeling of anxiety that borders on desperation among the traders.

“I have some eggs that I bought on Monday but they are yet to be bought,” said Mama wa Quail - how she is commonly known at the market in Kabete, Kiambu County - when we visited her on Thursday.

Wangige is one of the largest eggs markets in Kenya.

A good number of farmers, says Mama wa Quail, have abandoned poultry farming altogether. “There are so many poultry farmers who have sold their chicken for meat.”

Egg sellers blame their woes on cheap imports from neighbouring Uganda. “While we are hurting, farmers in Uganda are benefiting,” said the trader.

But what does she want the Government to do, we ask. “Let them (Ugandans) eat their eggs, as we eat ours,” she replied.

But even after the traders poured into the streets calling on the Government to stem the inflow of eggs, the Ministry of Trade will not cave in.

Instead, the Government has opted to uphold the tenets of free trade as articulated in the East African Community’s Common Market Protocol.

Trade Principal Secretary Chris Kiptoo says Kenya is keen on staying true to the commitments it made to the World Trade Organisation (WT0) and the East African Community (EAC).

“We’re committed to promoting free trade within East Africa. So, we can only stop goods that are coming to Kenya if they violate the rules and regulations around safety,” he said recently in an interview with a local daily.

“If we also find that there’s an element of dumping, meaning the cost of goods is higher than what they’re selling at here, then we have to come in,” he said, insisting there was no evidence of that so far.

A lobby of poultry farmers added salt to injury by insisting that there was no proof of existence of imported eggs flooding the Kenyan market - although traders in Wangige say the over-supply which has lasted more than six months is unusual.

Chairperson of the Kenya Poultry Farmers Association Wairimu Kariuki was reported by a local daily saying the price change has resulted from a glut as local production is currently up, which is normally the trend in January.

Kenya’s balance of trade with Uganda has recently shifted in favour of the latter, which mostly exports agricultural products to her neighbours.

Once industrial novices, Kenya’s neighbours can now also manufacture household goods such as cooking oil, margarine, cosmetics, processed milk and sugar, which used to be imported from Kenya.

This has seen manufactured goods from Kenya to her neighbours decline significantly.

A 2016 working paper by the World Bank noted that China’s foray into the region might have hurt Kenya’s exports into the four East African countries.

The paper, Deal or No Deal: Strictly Business for China in Kenya? It noted that Kenya’s exports to Uganda and Tanzania were falling.

“Chinese goods may have also hurt Kenya’s exports to its neighbours.  Exports to Tanzania and Uganda are quite similar to China’s, compared to both countries’ exports to the United States or the UK,” read the report written by the World Bank’s Lead Economist for the Russian Federation Apurva Sanghi and Dylan Johnson - consultant in the Macroeconomics and Fiscal Management Global Practice in Nairobi.?

Available figures do not show a remarkable jump in the quantity of imported eggs from Kampala but the landing price in the last two years has at times been surprisingly low.

According to figures from KNBS, 100,000 kilogrammes of eggs were imported from Uganda in December 2017 at a cost of Sh1.5 million, which translated to about Sh1 for an egg.

Kenyan farmers insist that Ugandans are flooding the local market with their cheaper eggs whose production has been subsidised by State.

Interestingly, media reports from Uganda tell a different story. An article by a Ugandan local daily said the country’s farmers were suffering losses from falling egg prices due to lost market opportunities in the region, particularly Kenya which consumes 60 per cent of the eggs produced in the country.

“Approximately 60 per cent of the eggs produced in Uganda are exported to Kenya and now Kenya is also producing eggs on a large scale,” said Aga Sekalala, the executive director of Ugachick, a leading poultry breeder in Uganda.

“That leaves us with no market as demand is fixed. That is why the egg prices had to be cut.”

But things have not been any better for Kenyan poultry breeders - though consumers have rarely had it so good as retail prices of eggs free-fall.

Since August last year, the price of eggs has dropped from Sh260 to the Sh200 a tray, sending local farmers into major losses; so much that some are quitting the trade.

“This business used to be able to take our children to school but at this rate we cannot continue,” said a trader at Wangige.

Having failed to secure a market for their produce, some have taken their grievance to social media.

“Hi guys. So my dad is having a crisis at his farm in Ngong. Due to reduced orders over the past few months, we have a backlog of about 5,000 trays. If you know anyone looking for clean, high quality eggs kindly DM and retweet! Thanks in advance,” one @monyakara tweeted on January 17.

However, some studies have shown that some government policies have also been detrimental to poultry farmers.

As far back as 2013, a study by Tegemeo Institute, an agricultural policy think-tank affiliated to Egerton University, found that a 16 per cent value-added tax (VAT) on poultry feed would increase the price of eggs.

On average, a 50-kilogramme bag of layers mash retails at Sh2,300 in Kenya whereas in Uganda the same size sells at about Sh1,800.

On the production side, Kenya also imports most of the feed manufacturing ingredients such as soya and sunflower from Uganda and Tanzania, making them more expensive here than in the countries of origin.

But as eggs lacks differentiation, they have crept in and mixed with the Kenyan produce and iare now dictating the pricing.

Early last year, the Government lifted a ban on poultry and poultry products from Uganda, bringing to a close a 15-month period when Kenyan traders enjoyed an uncompetitive market.

The ban was imposed in January 2017 over an avian flu scare, with only three Ugandan firms - Hudani Manji Holdings, SR Afrochick and Kukuchic - being allowed to export their poultry products to Kenya.

With the end of the embargo, Ugandan eggs - just like Chinese fish in Kenya’s leading fish market in Kisumu - are being sold right where most of Kenya’s eggs are produced: Wangige.

“You cannot tell the difference, there are many here who have the Ugandan eggs. They would not tell but we know,” said Mama wa Quail.

Mama wa Quail says that while a glut in the business is not uncommon, the difference this time it has it lasted for several months with no end in sight unlike previous instances where the price corrected within a month.

East African Community and Regional Development Cabinet Secretary Adan Mohamed says the farmers’ problem is not dissimilar from the Government’s.

He told Weekend Business that it is difficult to deal with the problem without strict enforcement of rules of origin at border points, which has allowed the common external tariff to be abused.

Mr Adan said some products are imported into East African countries without duty then they are sneaked into the common market at a cheaper price, distorting the market.

“The eggs, allegedly from South Africa, may come into EAC through other countries without paying duty. At the border, how can we know which eggs have been hatched in Uganda and which have been brought in? How do you block?” he posed.

Tatu City development continues to take shape despite numerous bottlenecks the firm has faced at the project site in Kiambu County.

By Vivianne Wandera | 6 hours ago