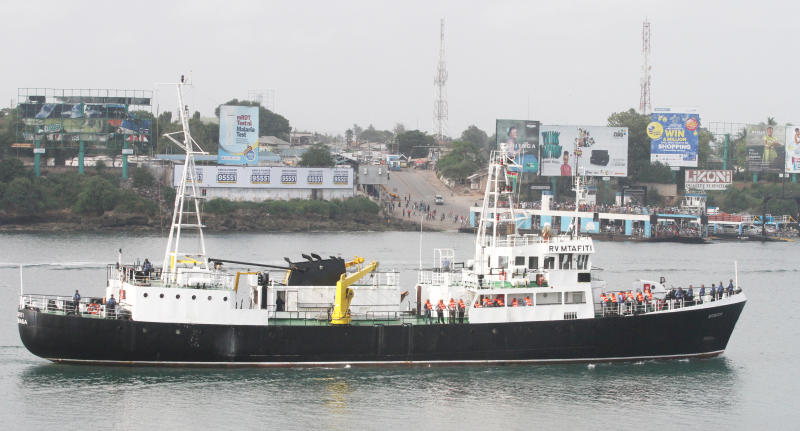 Kenya Marine Fisheries Research Institute (KMFRI’s) research vessel, RV Mtafiti has embarked on a research expedition in the Kenyan North Coast beyond Malindi with dozens of researchers on board.

The expedition, according to a statement issued by KMFRI kicked off on February 15 and will end on March 3, 2019.

''KMFRI specialised marine scientists will be cruising aboard RV Mtafiti shall be deploying some state of the art equipment namely Remotely Operated Vehicles (ROV), grabber and cover among others,'' KMFRI statement stated.

It is hoped that research findings which will be packaged in policy briefs shall be useful in providing data that will enable the government invest more in the fisheries sector.

The cruise is being conducted with funding from the government through KMFRI and SOLSTICE -WIO project.

''The aim of the cruise is to compliment the strategic objectives of the KMFRI and also the Kenya National Oceans and Fisheries Policy (2008) objectives,'' the research agency added.

The survey starts off at the Southernmost transect progressing northwards.

KMFRI said that this will be followed by the shooting of Massive Online Open Course (MOOC) called North Kenya Bank: The Next Frontier for Food Security, a five week module MOOC aimed at showing how science can be applied to foster Blue Economy Sustainable growth.

KMFRI said that it will focus on fishing zones in Ngomeni and Lamu respectively.

According to KMFRI's Assistant Director Oceanography and Hydrography, Dr Joseph Kamaus said that with the government’s plans to shore up revenue generated from fisheries resources, the fishing zone in the North Banks has been identified as an important emerging fishery that is expected to spur economic growth for the local fishing communities.

''This is so because artisanal fishers have depleted fish catches in narrow waters and are now advancing towards the North Kenyan Banks which is largely unexploited in search for fish,'' Dr Kamau said.

Dr Kamau said that sustainable exploitation of blue resources is the main focus of the Blue Economy initiative aimed at raising the marine fisheries worth from the current Sh2.6 billion.

“The River Tana discharges sediments into the Ocean. These sediments from Tana River pileup to form a 130m mountain. It is this mountain of Tana River sediments that are perturbed during the South East Monsoon as the EACC gains its northerly momentum. Thereby causing the seeding of the NKB system with nutrients deposited by the Tana River from the fertile catchment area enhancing productivity and the fishery stocks,” explained Dr Kamau.

With the Blue Economy initiatives taking centre stage in the Coast region, KMFRI hopes to leverage on its marine research prowess to sustainably develop fisheries resources in the North Kenya Bank and enable formulation of informed management interventions.

With the infrastructure for the marine fisheries sector being quite limited, fishermen employ very simple gear, and can only fish in near-shore waters, all of which limits their ability to catch fish.

Crude oil deposits so far discovered in Kenya are insufficient to allow for the building of a refinery, a senior petroleum ministry official said