State projects in limbo as wages, debt eat up revenue 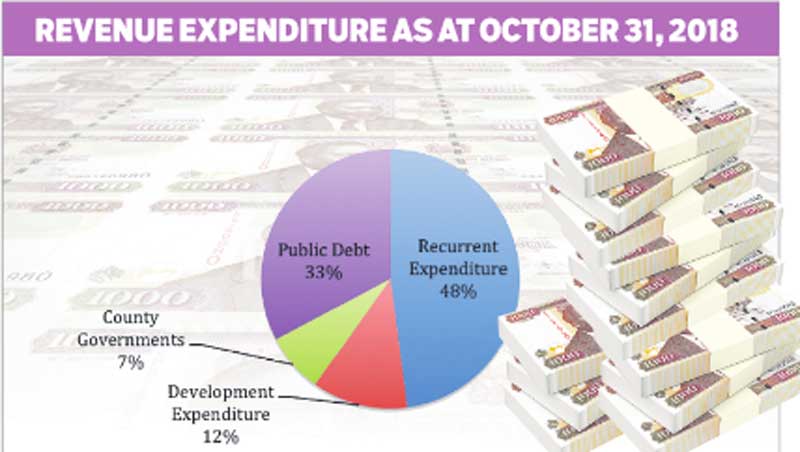 Salaries and debt repayment are taking the lion’s share of Kenya’s revenues, casting doubt on the effectiveness of the country’s fiscal consolidation efforts.

The latest expenditure report from the National Treasury indicates recurrent expenditure and debt repayments gobbled up more than 70 per cent of the country’s expenditure for the first quarter of the 2018/2019 financial year.

This comes even as taxpayers continue to feel the squeeze from new taxes on fuel, internet and banking services, introduced by President Uhuru Kenyatta’s administration under the Finance Bill, 2018 as part of measures to bridge revenue shortfalls.

The Kenya Revenue Authority (KRA) has so far collected Sh439 billion, according to Treasury’s financial statements, translating to 27 per cent of the Sh1.6 trillion the taxman hopes to collect over the 2018/2019 financial year.

The Government has borrowed a further Sh105 billion from the domestic market over the past three months, with another Sh6 billion received in loans and grants from bilateral governments and international organisations.

Recurrent expenditure, largely made up of salaries and administration costs, took up Sh285 billion, representing more than half of total tax income generated in the past three months.

The highest recurrent expenditure was recorded under the Defence Ministry and the State Department for Interior where Sh38 billion and Sh33 billion was spent between July 31 and October 31, 2018.

This means the two State departments have so far utilised more than 30 per cent of their recurrent expenditure allocation for the current financial year.

Other big spenders include the Presidency that has spent Sh2.3 billion (30 per cent) in the past four months of the Sh7.7 billion allocated for recurrent expenditure in the current financial year.

In contrast, ministries and state departments spent little on development expenditure, with at least 15 public agencies receiving no allocation at all, almost halfway into the financial year.

The National Treasury indicates that only Sh71 billion out of Sh382 billion allocated for development expenditure has been released.

This represents just 18 per cent of the overall funds earmarked for development expenditure in the 2018/2019 financial year.

The State Department for Correctional Services and the Defence Ministry, for example, received no allocation from the Sh1.8 billion and Sh4 billion meant for development expenditure in the current financial review.

This means projects such as the construction of 500 housing units for prison staff and 215 new prisoners wards planned in the current financial year will be delayed or postponed for lack of funds.

At the same time, Treasury has disbursed only a fraction of the funds crucial for kick-starting the Big Four agenda, raising questions over the timely fulfilment of the ambitious economic targets.

The State Department for Crop Development, which is expected to drive the agricultural pillar of the Big Four agenda, for instance, has received a partly Sh1.9 billion out of the Sh16 billion meant for capital projects this year.

“There is a need to recalibrate the balance between development and recurrent expenditures, with the latter bearing a higher share of the expenditure containment,” said the bank in the 2018 edition of the Kenya Economic Update.

Counties have similarly been starved of financing, with Treasury disbursing only Sh44 billion out of Sh304 billion meant for the 47 devolved units in the current financial year.

Squatters claimed they were allocated the property by the Government after they were displaced during the 1992 tribal clashes.