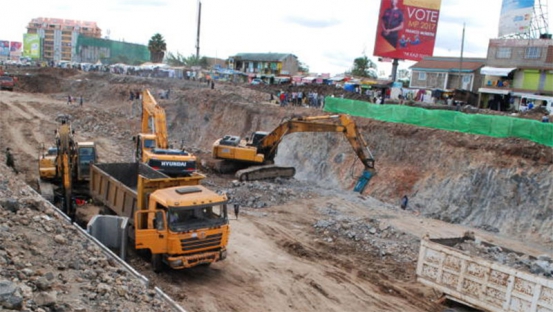 Businesses along Outering Road that is under construction are counting losses. Right at their doorsteps are deep trenches.

The road construction work also leaves behind a heavy cloud of dust, which has been keeping clients away. Those with cars have no parking spaces. In fact to access some of the premises, one must be ready for some serious jumping exercises. It is a risky venture.

Most businesses are on the right side as you go towards Donholm while on the left side are estates like Avenue Park, Tumaini and Pipeline, among others. The most affected are hotels like Chariton, Aga Khan Hospital, Bliss, Jacmil and Tumaini supermarkets, cereal shops, petrol stations like Kobil and Shell and even rental houses.

Joseph Kihara, a manager at Jacmil supermarket near Pipeline Estate stage agrees that they have lost business since the road construction started.

“We had customers who used to stop by our supermarket but these days they do not come due to accessibility challenges. We also had a small parking space right at the supermarket’s entrance, but it is no longer there,” said Kihara, who says they would be relocating soon and wait for the completion of the road.

A stone’s throw away is Tumaini Supermarket, which is situated in  Pipeline Estate that has also lost customers due to the road construction hassles.

“It has really affected our sales and flow of customers. We had over 2,500 clients but today, they have reduced to between 1,300 and 1,500 due to accessibility challenges,” said Geoffrey Musau, the branch manager.

Mr Musau says their walk-in customers, especially like those who alight from the Embakasi-bound train, which stops right opposite their supermarket in the evenings, have found it hard to enter the supermarket.

“My appeal to the contractors is that they put up a flyover or bumps near the supermarket so that people from the other side of the road can easily cross to come and shop,” suggests Musau.

Musau also says they are not planing to move despite the fact they are only two metres from the road. The road has eaten into the space that was used for client parking.

To Jonathan Mbithi, a manager at Chariton Hotel near Avenue Park Estate, the dust left behind by the vehicles is the main cause of worry. Nowadays they are forced to clean the hotel two or three times a day.

Even as we chat with Mbithi, there is a lorry right in front of the hotel. It definitely makes life hard for anyone seeking to access the premises.

A few metres away is a plot that has plastic bags covering the balcony one one side of the plot that faces the road to protect them from dust. These has also resulted into some plots along the road missing out on tenants due to noise of vehicles and dust.

These are common scenes along the road where vehicles are parked anywhere. Matatus also pick and drop customers anywhere along the road inconveniencing passerby and businesses. To Catherine Githinji, a cereals trader along the road, the road construction has been hard on her too.

“Business is down since the road construction started. My business is directly opposite Avenue Park Estate where parents would even sent children to buy cereals but now cannot because even crossing the road from the other side to this side is too dangerous,” says Ms Githinji.

Ms Githinji says she is forced to receive her stock at night due to lack of space for overloading during the day due to speeding vehicles along the road that is just near her shop. Another challenge is uncovered storm water drainage systems  that she says recently a bus plunged some of its tyres into it.

The prayer of these businesspeople and residents is that the road will be completed fast to save them from these inconveniences. The 13km eight-lane Outering Road, which starts at Taj Mall roundabout on North Airport Road and ends at GSU exchange at Thika Road, is 75 per cent complete and expected to be fully complete by September, 2017.