KenolKobil's net profit rises to Sh2.4b on back of lower costs 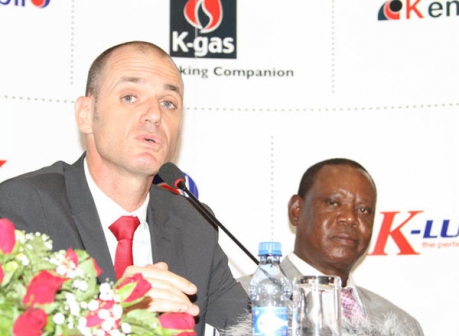 Oil marketer KenolKobil has reported a 20 per cent growth in profits for the full year to December last year.

The growth in revenue was driven by an increase in volumes of petroleum products and taming costs during the period under review.

The oil marketer's profit after tax increased to Sh2.4 billion from Sh2 billion in 2015.

"Over the year, the group focused on reducing the financing costs. This saw the group realise a massive reduction in net financing costs by 54 per cent in comparison with the previous year," said Group Managing Director David Ohana (pictured).

"Prudent management of inventories and stocks has helped us avoid over-reliance on banks. The net debt levels remained subdued throughout the year despite an increase in international oil prices. This also partly contributed to the drop in financing costs."

Finance costs reduced to Sh354 million during the year from Sh651 million the previous year. The company's net sales increased to Sh103 billion in the course of 2016 from Sh86.5 billion in 2015.

Mr Ohana also said the marketer had refocused its approach to Ethiopia in a bid to shore up earnings in the country.

He said the firm scaled up sale of high margin petroleum products such as cooking gas and lubricants, which it said have a high return and less costs.

The MD said the move had already seen the firm get a good return from the market during the second half of the 2016 financial year.

The market has been a challenge for the oil marketer due to heavy regulations across different sectors, including retail petroleum business and restrictions on foreign currency transactions.

"We have managed over the last six to seven months to increase the volume of high managed products, reduce sales which are not secure. We are quite happy with Ethiopia now and we are focusing on high yield areas like LPG lubricants," he said.

"The potential for growth is high, the population is high huge market and it is a strategic market for us."

Other than Ethiopia and Burundi, the firm has operations in Zambia, Rwanda and Uganda, having exited Tanzania and Congo last year.

The bulk of its profits are from its Kenyan operation, accounting for between 60 per cent and 70 per cent of its revenues.

Mr Ohana further noted that the political crisis experienced in Burundi after the contested 2015 elections had partly affected the firm's operations in the country, largely due to unavailability of other currencies.

"There were such challenges as availability of the dollar in Burundi," he said.

Over 2016, the firm added 30 new retail stations during the year.

The company's board recommended a final dividend of 30 cents a share, which would be in addition to the interim dividend of 15 cents per share, bringing the total payout to 45 cents. This represents a 29 per cent rise compared to 35 cents in 2015.

An inaugural test run for the standard gauge railway (SGR) from Nairobi to Mombasa was carried out successfully using a passenger train.