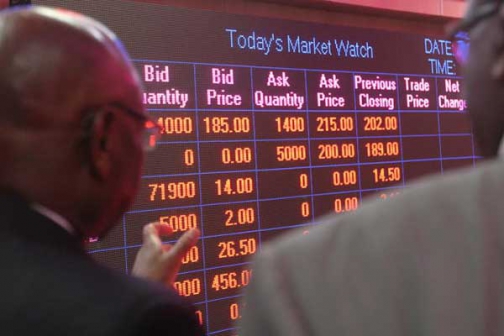 The 11 listed banking stocks made up nearly half the market capitalisation of the Nairobi bourse last year, but have since shrunk to a quarter of the NSE. Last year, the stocks shed Sh40 billion in share value.

A quarterly report released by the Capital Markets Authority (CMA) added to the calls to scrap the law capping interest rates.

CMA said the erosion is still being witnessed with the current bear run in the stock market. “Last year saw the implementation of interest rate caps on banks effective September 2016; an item that re-opened discussions over the appropriateness of regulatory intervention in addressing market inefficiencies,” CMA said.

Banks share prices dipped steeply when news hit the market that President Uhuru Kenyatta had signed the rate capping bill into law. National Bank and Housing Finance have lost 59 per cent and 46 per cent respectively of their share value in a year to date, the highest among the listed lenders.

Barclays Bank is currently trading 34 per cent lower than the same time last year, while KCB has lost 36 per cent. Equity Bank is down 31 per cent, while Co-operative Bank has lost 30 per cent of its value in a year.

Although none of the banks are trading at pre-September numbers, Investment banking firm Renaissance Capital says some of the banks may outperform the general malaise in the market.

Renaissance Capital said Equity share price may move to Sh33.90 from Sh31.50 while KCB may appreciate to Sh37.6 from Sh33.90. Co-operative Bank shares may also edge up to Sh16.0 from Sh15. However, the NSE 20 share index is still struggling to recover past the 3,000 psychological point sticking at 2,983.20 points on Wednesday even after making modest gains in consecutive weeks of trading.

Investors will be watching as banks release their results in the next couple of weeks to make decisions on whether to buy or sell their stocks. This may affect the bourse further if most follow the lead by Barclays Bank which reported a 12 per cent drop in profit after tax of Sh7.3 billion from Sh8.4 billion in 2015. The bank blamed impairment of bad loans and the law capping rates that came into play in the last quarter of the year. Stanbic Bank also reported a 10 per cent drop in net profit.

Investors will also be keen on additional regulations on banks including the Banking Amendment Bill of 2017 that proposes rationing State deposits to government affiliated banks and clarifying the 2016 Act to cap annual rates to stop banks from loading additional fees on the four percentage cap imposed by the Government.

CMA also pointed out that capping rates has limited SMEs’ access to credit as banks resort to loaning to the Government as it is less risky.

“We expect competition for corporate clients to intensify as the capping of lending rates constricts lending to SMEs,” Standard Investment Bank said in a note on Barclays Bank.