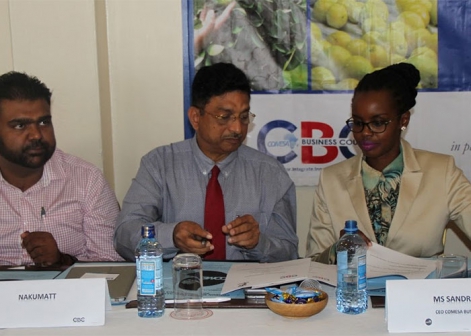 NAIROBI, KENYA: Agro food suppliers in the region will benefit from an expanded market thanks to an initiative by the Comesa Business Council on enhancing market linkage.

Under a Sh95 million ($950,000) Local Sourcing for Partnerships (LSP) project in six countries in the region, the council is training agro-food suppliers on global standards and ongoing market dynamics.

“Many private companies are now seeking to diversify their sources of supply and are increasingly approaching small-scale farmers. Sourcing from small-rather than large-scale farmers offers several advantages, including access to land and the diversity of the crops they produce. Sustainable local sourcing offers a significant opportunity to improve the livelihoods of small scale producers in Africa. It is a business model that forces all actors on the supply chain to collaborate and create attractive win-win situation for all,” said Ms Uwera.

She added “it should be recognized that building stronger supply chain  is public-private efforts.”

During CBC LSP training workshop, Comesa CBC signed a memorandum of understanding with the management of Nakumatt Supermarkets to enable the latter source goods from certified suppliers in the region.

The council is training suppliers on meeting market benchmarks and thus signing MoUs with retail outlets and hotels as part of guaranteeing security of supply.

Regional Operations and Strategy Director Thiagarajan Ramamurthy welcomed the partnership saying it will guarantee consistent supply of goods from various sources in the region.

He called on the region’s agro-food suppliers to diversify their sources so that they can be able to meet the customers’ expectations.

“The business environment is changing very fast   and thus requires the suppliers to be dynamic in order to cope up with the new trends,” said Mr.  Thiagarajan.

Due to fear and lack of adequate resources he noted the suppliers are not able to exploit potential in the region market.

The project being implemented in six countries -Zambia, Rwanda, Uganda, Kenya, Ethiopia and Malawi is supported by the Investment Climate Facility for Africa (ICF), USAID-IPAA, in collaboration with the public and private sector bodies.

Uwera says that the project aims at training local suppliers in global food standards so that they can be integrated into supply chains of the hospitality and food and beverages industries.

She confirmed that the business council has signed MoUs with buyers from across the six Comesa countries.

The companies she added have committed to sources from a pool of suppliers certified under the project on condition that they meet the standards of the companies as per the deliverables of the projects.

Some of the companies include Protea Zambia, Serena Group in Kenya and Rwanda Inyange a food processing company in Rwanda and Sarova group of hotels and Speke groups of hotels.

Uwera said, “Most companies often source outside the region due to the limitations of the local market in meeting the basic requirements of time, cost, quality and consistency in supply. This training will address core challenges faced by enterprises while trading in the market.”

Tracing the chaos in the sugar sub sector in Kenya

Why mentorship matters in schools

Parents and teachers have been advised to explore mentorship as a solution to students’ unrest in schools. Alfred Polo, the founder of Alfred Polo Foundation says lack of functional mentorship culture in schools has contributed to decreasing performance, increasing poor staff relationships, tensions and reduced productivity.