Will leaders solve land question or they are just paying lip service?

Politicians are again outdoing each other with grand promises on their approach to resolving the land question should they win the August 9 presidential election.

Key among Joho's responsibilities would be to fight historical land injustices at the Coast and across the country.

Deputy President William Ruto, and the UDA presidential candidate has promised to buy out farms that belong to absentee owners, subdivide and allocate them to landless people at the Coast.

There are also promises to convert Agricultural Development Corporation (ADC) farms that are used for research, seed production and breeding to settlement schemes for squatters and the landless.

Ibrahim Mwathane, the chair of Lands Development and Governance Institute (LDGI) argues that the Land Act establishes a Land Settlement Fund for such purposes.

“The promises are targeted at their voting blocs for obvious reasons but our laws have provisions that would allow the purchase of land for settlement of landless people," says Mwathane.

But more serious questions are being raised about the never-ending claims and the honesty of politicians in resolving the land question.

How many titles have been issued at the Coast, for example since 2010, when the new land laws and policies were rolled out?

What about other areas such as Rift Valley where groups like the Talai in Nandi Hills and Kericho claim their land was taken by white settlers who made them tea estate farms?

According to data from the Ministry of Lands, there are about 300,000 claims from alleged victims of historical land injustices.

Efforts to get the list of those who have been settled were unsuccessful because neither the Cabinet Secretary nor the Principal Secretary returned calls.

He said that there are many grey areas because no one knows how many victims of land injustices have been settled and who the beneficiaries of titles being issued are.

In 2013, President Uhuru Kenyatta and his Deputy William Ruto launched what they said was the issuance of 60,000 title deeds at the Coast.

Like other ceremonies that have followed, a few titles were handed out with an assurance that the rest would be picked by owners at lands registries.

“Who collected those titles? Is it the thousands of people who have acquired beach plots and other parcels in the coastal counties and thousands of land brokers?” asks Lumumba.

The question is weighty because successive governments have for many years embarked on issuing titles at the Coast to deal with historical land injustices.

Resettlement of other groups from Central Kenya and other areas has taken place, meaning the 300,000 target could have long been achieved.

Lumumba also argued that successive governments have given lip service to land reforms and that is why much of community land is yet to be adjudicated.

Experts argued there is need for the land adjudication process to be more transparent.

“I can say we have had piecemeal reforms on policy but implementation is either lacking or is halfhearted yet that is all is required, says Lumumba.

And so, can Kenyans see the real numbers of landless people being resettled for them to measure the extent to which the problem has been solved?

Can the Lands Ministry, by any means, furnish the media with the list of poor landless Kenyans who got the land?

“There is a possibility the president or even the Cabinet Secretary does not know people allocated public land, because of some well-connected fat cats, corrupt junior official in the Lands ministry,” he said.

It has also emerged that some claimants allocated land in the 1960s are still on the waiting list, like the Nyakinyua women groups.

The Mwai Kibaki and Jubilee governments also did not resettle all land clashes victims in Nyanza and Western who were evicted from Rift Valley since 1992.

Appetite for land in a country where only 20 per cent is arable is high and that explains why debate on historical land injustice, resettlement of squatters and land adjudication is always a key campaign agenda.

“It has not only caused simmering discontent and conflict among communities, but it also remains a complex fault line that has been complicated by politicians and successive governments,” said Murunga.

Politicians have also been held responsible in the past for inciting ethnic clashes leading to some communities being evicted from their farms either before or after presidential elections.

Other land experts agreed with Lumumba that most of the titles issued from 2013 should have been given out long time ago.

“They were either for settlement schemes or they are for land grabbed in 70s, 80s and 90s but for some reason, nobody issued those titles,” said Nairobi-based activist Mwangi Mbitiru.

Mbitiru’s experience is that land has always been exploited for political reasons from 1999 when the Njonjo Commission into Land Law Systems was appointed.

Recommendations from the report, just like the Ndung'u Report released by President Mwai Kibaki were never implemented.

A senior retired lands officer described the purported land allocation done by successive governments as an exercise riddled with corruption and blatant grabbing by senior officials, relatives and well-connected people.

“Investigate who owns most of the ADC land and other government farms in places like Ngata in Nakuru and Chepchoina in Trans Nzoia and you will see very few, if any, people who were landless there,” he says.

And Lumumba also says that while the title count has increased, it is not sufficient because the six million titles the government is issuing do not amount to new title holders.

That is because most of the people getting them already have titles, and therefore adding them more does not amount to redistributive land reform.

“It is not adding value because we are still concentrating land in the hands of a few,” he said.

Whereas the critics give credit to the government for the ongoing digitisation process, they say more still needs to be done.

Although the Lands ministry has tried to capture as much data as it can on digital platforms, most changes carried out since 2010 are about legislative policy and institutional reforms.

There is also an issue overlooked by successive governments at the expense of politics: that of disparity in land ownership between men, women and youth.

A past survey by KLA found out that women and youth have very few title deeds and yet they are the majority.

“We analysed the official register of settlement schemes to see how women benefitted and found they were under two percent,” Lumumba said.

And so 97 per cent were either owned by land companies or men.

Every government has cherry-picked what it wants to implement and so there has not been a very clear implementation plan since 2009.

“We had the Njonjo and Ndung'u reports, but they were never implemented because they are fairly volatile making it difficult for politicians to act on them,” said Mwathane.

Prof Gitile Naituli of Multi-Media University, while referring to President Kenyatta's recent move to issue title deeds, cautioned that the timing can be misconstrued to be a campaign agenda for Azimio, which he supports. Uhuru’s administration has issued 6,1000,945 new title deeds from 2013.

Political scientist Prof Amukoa Anangwe argues that the president cannot be faulted for performing his duties even though the timing raises eyebrows.

“When you have land you are assured of livelihood in one way or another and that is why politicians use land as a campaign tool because it is particularly emotive,” Anangwe said.

Analysts say it is more satisfying when beneficiaries receive the documents from the president or other senior people in government.

Some analysts however argue that beneficiaries will most likely not care about complaints raised by political players against the issuance of titles.

“Even if he were to give titles on the eve of the election, he is the president and so no one will question because he will be performing his role, although the question is why now,” said political analyst Martin Andati.

He thinks Uhuru is using the noble idea to score political points. “It influences the voters because the president has a big say in Kenya's politics. 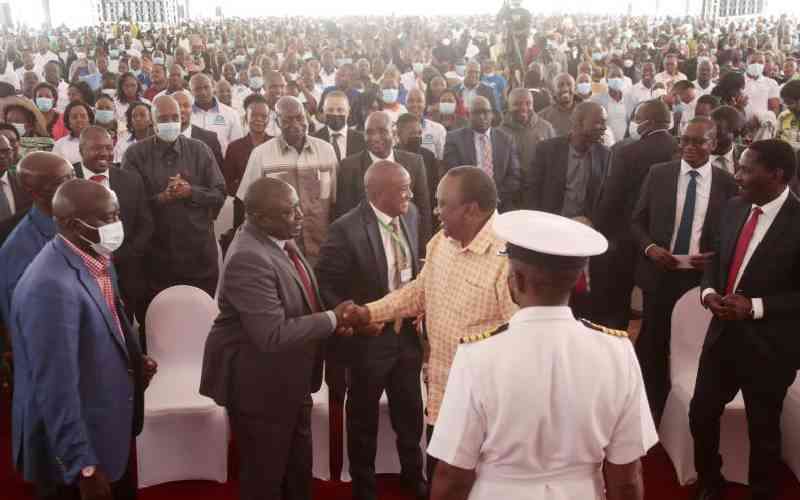 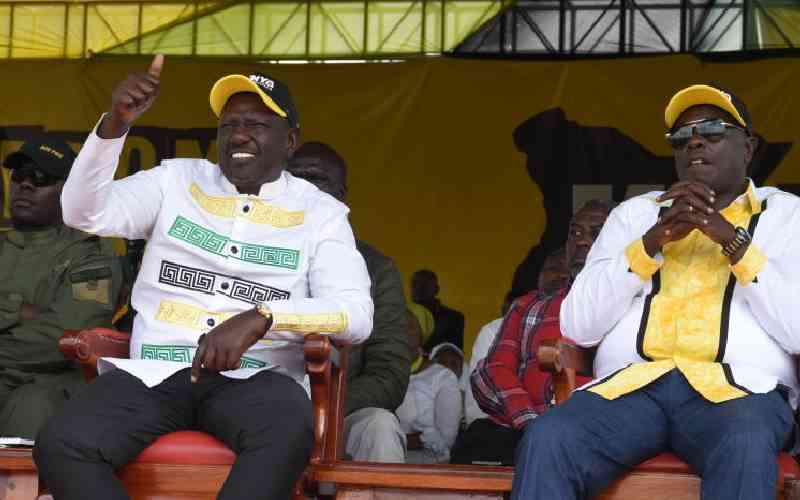 By George Maringa 14 hours ago
National
11 petitioners seek to block Ruto, Rigathi swearing in if elected
.