In this first of a four-part series, we look at President Uhuru Kenyatta’s economic legacy slicing through the interplay between his politics and the economy

Building toilets in Raila Odinga’s political bedrock of Kibera slum is all that the new Jubilee Government needed to vanquish the former prime minister.

This would, it was thought, expose Raila’s “ineptitude” as a long-serving Member of Parliament for Lang’ata Constituency.

To the new Jubilee administration of President Uhuru Kenyatta and his deputy William Ruto, this would be a stark reminder that for the two decades that Raila had been the MP for this ‘poverty-stricken’ constituency, he never had the wits to build such a simple but critical amenity with most residents resorting to flying toilets.

Uhuru and Ruto rose to power on the dictum of ‘kusema na kutenda’ [saying and doing it]- a slight against Raila who, they insisted, was a talker than a doer.

In essence, UhuRuto would in their first term, turn economic development into a lethal political weapon.

Raila's supporters described initiatives such as the slum upgrading programme in Nairobi’s slums of Kibera and Mathare, and Kondele in Kisumu as “political projects.”

Through the then powerful Cabinet Secretary for Devolution, Anne Waiguru, Jubilee built toilets in Kibera in what was supposed to be a coup de grace against a man that had been critically acclaimed as the ‘enigma of Kenya’s politics.’ 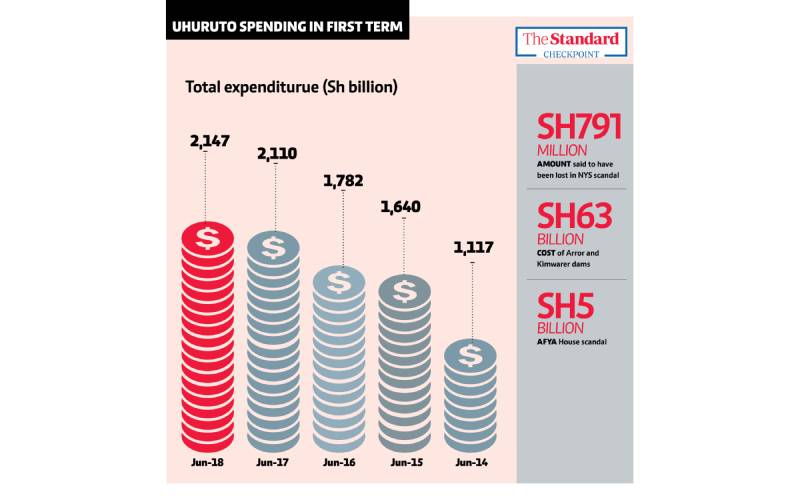 Done by the National Youth Services (NYS), this slum upgrading programme accorded Jubilee Party an opportunity to kill two birds with one stone.

With the project, Jubilee would not only advance its development agenda but also cut down the former prime minister to size.

But, in the end, the programme also exposed the new administration’s underbelly.

When it imploded, rumours spread to every street corner and newspaper column that under the new regime you did not need to go through the trouble of producing or procuring goods and services when dealing with state corporations such as the NYS for gain.

You did not need to be an entrepreneur.

Instead, a new strain of entrepreneurs emerged that was more like what Ayn Rand, the Russian-American author and individualist, described as “the pull peddlers.”

These were people who, according to Ms Rand, had no payrolls to meet, no overhead to carry, no real estate to own, no equipment to build.

“Their only asset and sole investment consisted of an item known as ‘friendship’.”

These were the tenderpreneurs - a group of opportunistic brokers who, oftentimes overcharged taxpayers for goods and services they did not know where or how they were produced.

For example, the Devolution ministry is alleged to have bought 18 male and female condom dispensers for Sh450,000 in 2015 - compared to a market price of Sh4,500 per piece.

The ministry is also alleged to have acquired 20 ballpoint pens at Sh174,000, which translated to Sh8,700 apiece compared to a market price of Sh300.

In a few instances, these tenderpreneurs were paid billions for supplying air.

David Ndii, an economist and critic of the Jubilee Government, noted that the “biggest casino in Kenya is public procurement.”

This game of lottery, which Dr Ndii says some Kenyans wrongly believe is entrepreneurship, is so serious that people are being trained on how to fill in tender documents.

A lot of Kenyans, said Ndii, had been diverted from doing productive work to gambling for Government tenders; with stationary, for example, being sold to various Government offices by people who are not even traders of the items.

Besides, being magnets of corruption, it soon became apparent that most of the political projects were not thought out well and would leave behind an ignominious legacy of having saddled future generations with huge debts.

This is because most of them barely helped the economy to grow and create jobs.

Indeed, Jubilee Party strove to outshine Uhuru’s predecessor Mwai Kibaki, if only as an antidote against all the misgivings about the levers of State power falling into the hands of two individuals that had been indicted by the International Criminal Court (ICC).

The fact that the two had been accused of crimes against humanity following the disputed elections of 2007 only added to their reputation issues.

They had to talk big to look big.

The USA and the United Kingdom had indicated that they would shun them should they be elected.

“Choices have consequences," said the then Assistant Secretary of State Johnnie Carson.

Kenyans elected them, nonetheless. And they immediately embarked on a plan to better Kibaki’s record.

They were going to rely on the newly opened tap of Chinese funds which they hoped would replace grants from the “insolent” West.

They would use the Chinese funds to build megaprojects – as opposed to before when the government relied on the World Bank and the International Monetary Fund – both of which are controlled by the West.

Moreover, for the first time, they were going to tap into the global financial market, leaving the local credit trough to firms and households.

This, said Jubilee in its manifesto, would help bring down the cost of lending.

Where an analogue Kibaki crammed pupils into small, poorly equipped classrooms with his free primary education, Jubilee Party would go an extra mile and give laptops to all Class One pupils.

But first, they needed to finish off Raila.

And it looked as though the former Prime Minister had been cornered. Attempts by some youths to destroy toilets that had been created in Kibera came off as kicks of a dying horse.

The ablution blocks that had been built in these informal settlements offered jobs to hundreds of thousands of youths.

About 3,600 young people in Kibera benefited from the slum upgrading program that sought to put idle youth to work.

Each was paid Sh300 a day while an additional Sh150 would go into Sacco savings. In total, they would each expect Sh1,500 in their mobile wallets every Friday.

Then suddenly the money stopped hitting their mobile phones.

Something was fishy at NYS, said Raila, finally seeing an opportunity for a counterstrike.

Less than six months after being elected, President Kenyatta had launched Access to Government Procurement Opportunities (AGPO), a legal requirement that at least a third of government tenders be given to youth, women and persons with disabilities.

It was under the auspices of AGPO that close to Sh1 billion was siphoned from NYS.

A good chunk of this money was paid to a hairstylist known as Josephine Kabura Irungu.

Ms Kabura and many others like the flamboyant Ngirici family were allegedly paid millions for supplying nothing to NYS.

A lot of Kenyans doubted this kleptocracy was unique to NYS.

Many other scams followed the NYS Scandal, including the Afya House Scandal and that of Arror and Kimwarer dams in Elgeyo Marakwet which led to the ouster of the National Treasury Cabinet Secretary Henry Rotich.

When the former Auditor-General Edward Ouko released the audit report for the Financial Year 2013-14 in 2015, it showed that about a quarter of the country’s Sh1.6 trillion budget could not be adequately accounted for.

The government disputed the numbers though President Kenyatta would later say that Sh2 billion is stolen from the government coffers every day.

In October 2016, President Kenyatta did not hide his frustrations in the war against corruption, noting that it piled a lot of pressure on him.

“Show me any administration since independence that has taken action on corruption as I have done. I have removed everybody.

I have done my part, at great expense also, political, by asking these guys to step aside,” said a visibly frustrated president, as he blamed courts for “derailing the fight against graft.”

Of course, Kenyans were dumbfounded by the brazenness with which Ms Kabura easily registered three companies with esoteric names, opened bank accounts, and received payments running into hundreds of millions from NYS for supplying nothing.

But they also marvelled at the genius of the new Huduma Centres - the new nodes of public service delivery in which, for the first time, enabled the public to get every government service under one roof.

Huduma Centres played a major role in helping Kenya make major progress in the ease of doing business, a World Bank ranking that has since been discontinued.

Other achievements include the connections of a lot of thousands of households to the national grid; the expansion of the country’s road network; and enabling poor pregnant women to access maternity services for free.

Although critics see the Standard Gauge Railway (SGR) as a white elephant, it has opened up the country easing the movement of people to and from the coast for business or pleasure.

Jomo Kenyatta International Airport and the ports of Mombasa were also expanded by the Jubilee administration.

Older people, women and persons with disabilities have been receiving more money from the State.

Massive investments in fibre optic cable increased access to the internet, with Kenya gaining a new title as the African Savannah.

The number of people with the internet dramatically jumped.

But there were still misgivings.

A 2013 World Bank report showed that for the SGR, with an investment of Sh325 million per kilometre, to be financially and economically viable it had to have a carrying capacity of 60 million tonnes and attract the traffic of 55.2 million tonnes per year.

The scramble for the tiny quantity of imports is already too vicious. The truckers, as was predicted in an article by The Economist, will do just anything in their power to beat the SGR. The government has been forcing importers to put their cargo on the SGR.

A government study done in 2019 on the cost of using the railway showed that the SGR was more expensive than road due to port handling charges such as re-marshalling, storage and demurrage.

The idea that SGR would in the first two years add 1.5 percentage points to the size of the national cake, or gross domestic product (GDP), or that with the SGR rail freight would increase from five percent in 2013 to 50 percent, never materialised.

As the general elections of August 2017 neared, UhuruRuto oiled their PR machinery. They bailed out companies such as Mumias Sugar to win Western Kenya votes.

Earlier in September 2016, President Kenyatta had signed into law a populist bill that capped credit offered by banks.

For two years, banks denied credit to the private sector.

In addition to the economy being starved of credit, crops and livestock also went without water in 2017 hitting the agricultural sector hard.

The election uncertainty also saw a lot of investors adopt a wait-and-see approach. These factors combined to contribute to a slowdown in economic growth, with the GDP growing at a slower pace of 3.8 per cent -- the lowest since 2013.

With the depressed harvest of maize due to the crippling drought, the price of maize flour was quickly turning into a hot campaign issue.

The opposition, led by Raila, latched on to the crisis, accusing the Jubilee Government of failing to ensure Kenyans had access to unga.

Fearing a backlash on the ballot, the Government decided to buy unga for its citizens.

Mr Rotich unveiled the maize subsidy programme, which was meant to address the skyrocketing price of flour.

Because there was no maize coming from the country’s crop-growing areas as well as in the neighbouring countries, the Government started by giving licenses for the importation of the grain from overseas.

Through the subsidy, a two-kilogramme packet of maize flour retailed at Sh90 and Sh47 for a one-kilogramme.

It was good politics that silenced Jubilee’s critics, and perhaps Uhuru and Ruto to be re-elected.

But it was bad economics that would hurt farmers for the next two years as the market remained flooded with cheap maize from Mexico.