Mikel Arteta has responded to comments from Rwanda president Paul Kagame after he slammed Arsenal's 'mediocre' performance in their defeat to Brentford.

Arsenal last week suffered a nightmare Premier League opener against the newly-promoted side Brentford as they claimed a 2-0 victory.

Rwanda's government sponsor Arsenal and pay £10million a year to have 'Visit Rwanda' on the Gunners' shirt sleeves.

In three tweets, Kagame unleashed a rant after the game and said fans did not deserve mediocrity. 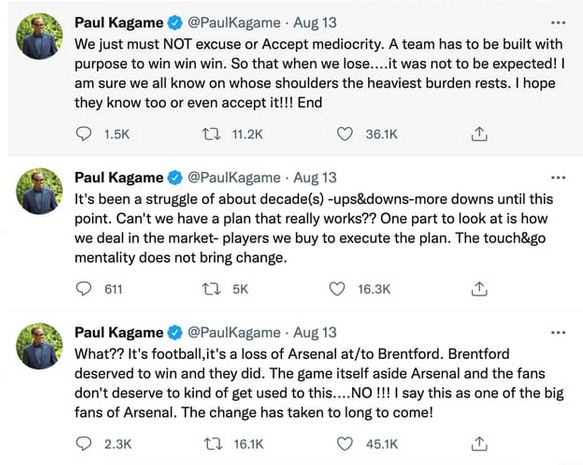 And Arteta has since responded to Kagame’s remarks quoted saying he agrees with Paul Kagame that Arsenal must not accept mediocrity.

“I agree that Arsenal should not accept mediocrity. I completely agree with that,” said Arteta.

Arteta further reveals that he was not happy with some people trying to ‘bury’ him but could not name names.

‘I’m talking about the lack of clarity in the messages and taking advantage of moments to use some disrespectful ways of describing certain things. This is what I say. Nothing new, ” he added.

“No, it’s not about showing, it’s about expressing the feelings that are so clear in such moments.”

Arsenal play Chelsea at Emirates Stadium on Sunday and will be looking to bounce back from their opening game of the Premier League season defeat to Brentford.