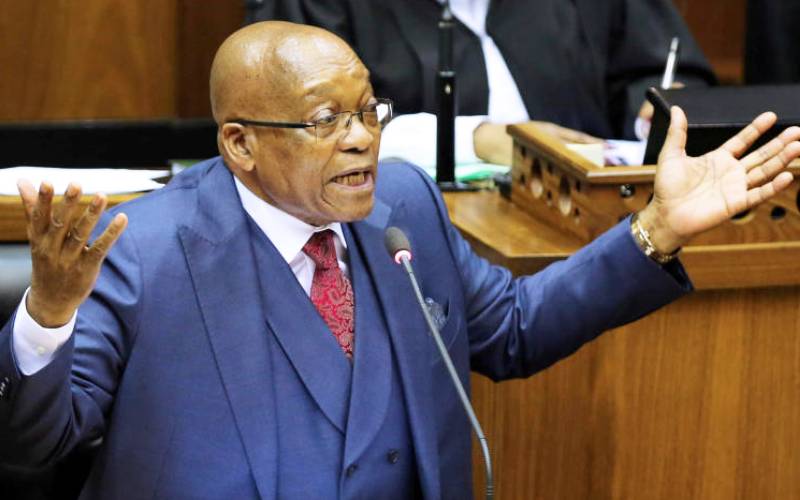 South African defence company Denel expects to receive government support in the third quarter as ministers are satisfied with progress in its turnaround plan, the State-owned group said on Friday, adding it saw potential to cut more costs.

Denel, a cornerstone of the country’s once-mighty defence industry, last month asked for a 2.8 billion rand (Sh19 billion) cash injection to help it emerge from a financial crisis.

The firm, known for its missiles and howitzers, is one of several State firms whose finances were damaged by years of mismanagement during the tenure of former President Jacob Zuma (pictured).

Denel said it was talking to the Department of Public Enterprises (DPE) and the National Treasury (NT) about the turnaround process and was in discussions about details of the state support and its conditions.

The statement contained no details on the size of any cash injection. Under current President Cyril Ramaphosa, South Africa’s public finances are being stretched by the need to rescue other ailing state firms, such as loss-making power company Eskom and South African Airways, which have both already received support.

“The Ministry of Public Enterprises has full confidence in the ability of the Denel board, its CEO and its management team to return the company to operational and financial sustainability and ultimately, profitability,” Adrian Lackay, spokesman for the department, said.

“Continued fiscal support for state-owned entities like Denel will depend on their ability to show how this will be effected.”

Under its turnaround plan, Denel will exit some loss-making businesses and forge partnerships to bolster others. It has rebuffed an approach by Saudi Arabia’s SAMI to take a stake in the firm but has said it could work with SAMI on other partnerships without giving up equity or intellectual property rights.

Denel said it could generate two billion rand from joint venture partnerships and said it had received about 40 expressions of interest to enter into partnerships or acquire parts of its business. It added it saw potential to cut costs by a further 500 million rand.

“Denel’s liquidity issues are short-term and the company is expected to generate positive cash flows within the next 12 months,” the company said.

Competition in the telecommunications sector will lower prices for Kenyans

To achieve President Uhuru’s Big Four plan, the private sector must play its part and fairly.