Did Kenya Airways do due diligence on US route? 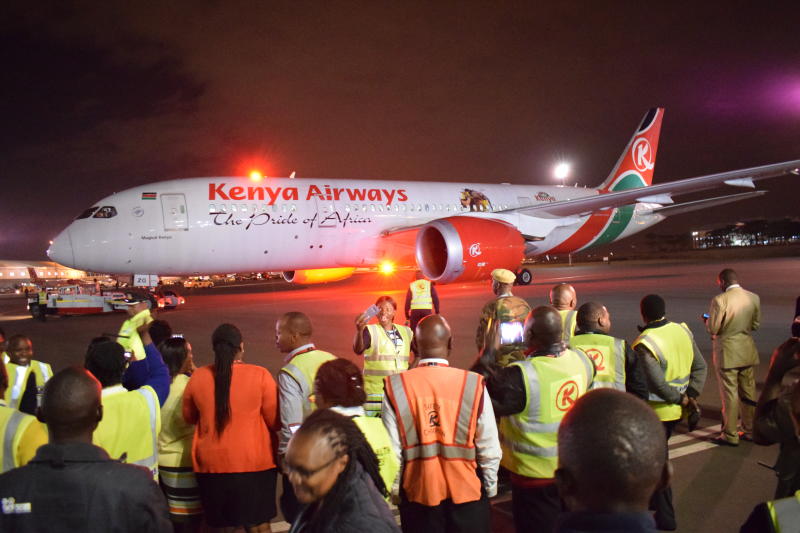 Questions are already emerging as to whether Kenya Airways planners could have miscalculated and placed huge investments and expectations on the Nairobi-New York flights.

The national carrier made lots of emphasis on the route, including key contribution to its bottom line, which it said could shore up its revenues by 10 per cent starting 2019 and aid the airline back to profitability.

The route, however, might not live up to its hype. It is already off to a turbulent start.

Despite the anticipation and the marketing undertaken throughout the year, the airline has not been able to fill up many of the flights that came after the hyped inaugural flight.

KQ has now decided to scale back the number of flights on the new route -  a move it attributed to low demand during the winter season.

It will reduce the number of flights this month by 30 per cent to 20.

In a statement, the airline said it cancelled flights that are not commercially viable, noting that the move is not unique to the New York route.

It noted that this was also not unique to KQ but always happens in the airline industry. The airline expects the route to grow its revenues by 10 per cent in the course of 2019.

While the management has a year to prove naysayers wrong, it is notable that none of the KQ’s 53 routes – as of December 2017 – contributed revenues on such a scale.

The best performers, according to KQ, are Nairobi-London and Nairobi-Amsterdam routes, which jointly accounted for 16 per cent of the airline’s turnover last year.

While analysts have hit out at the airline and noted that it should have “done a better job forecasting demand to avoid such a costly miscalculation,” KQ said the decision was reached before it started the flights.

It also noted that it had conducted prior research on the route, as is the case with other routes.

The route, according to the national carrier, will get traction from travellers who have in the past had to go through Europe.

“We conduct market research to ascertain the viability of any route we are considering to open and New York was no exception,” said KQ in a statement. “We have not only connected the two continents but have also given a more favourable option to our passengers who would previously use the one-stop route via Europe and notice that this new routing is a preferred population option which is receiving a lot of positive response.”

He noted: “We are addressing these concerns by offering a best practice product – non-stop direct flight; this is the best you can do; no changes, no missed connection, no additional airports.”

The airline will focus heavily on passengers plying the route as opposed to cargo. It said cargo on the route would not be enough to warrant deploying a cargo freighter.

It will instead use carry cargo in the bellies of the 787-8 Dreamliners that it is using on the route. It will start moving cargo on December 1.

“KQ’s direct flight to New York opens promising opportunities for Kenyan fresh produce farmers including horticulture industry but there is no plan to start cargo flights on this route. Plans are however in place to start uplifting cargo with effect from December 1,” the airline said.

According to the Kenya Economic Survey 2018, industries engaged in the production of items for export to the US under the African Growth and Opportunity Act initiative exported goods worth Sh32.8 billion to America. This accounts for a huge proportion of total exports to the US, which stood at Sh47 billion.

The number of tourists from the US stood at 148,000, contributing a substantial chunk of the 1.24 million tourists to Kenya in 2017. The US is one of the key tourist source markets and forms what are referred to as traditional markets whose residents have always been attracted to Kenya as a destination despite the long hours they have had to put up with to get to the country.

Both the number of visitors to Kenya and exports to the US are set to increase following the level of access that the direct flights offer.

Also expected to rise are investments to Kenya by US firms. In June this year, more than ten American firms were in the country shopping for deals with Kenyan companies. Reports indicate that the companies were able to strike agreements valued at over Sh10 billion with local firms.

More deals were reached during a visit by President Uhuru Kenyatta to the US in August when US companies agreed to invest $238 million (Sh24 billion) worth of projects in Kenya targeting energy and food security.

KQ will have the role of facilitating movement of goods and people between two countries, which could be a key enabler for industries that depend on closer ties with the US,  in what appears to favour the country more than the airline.