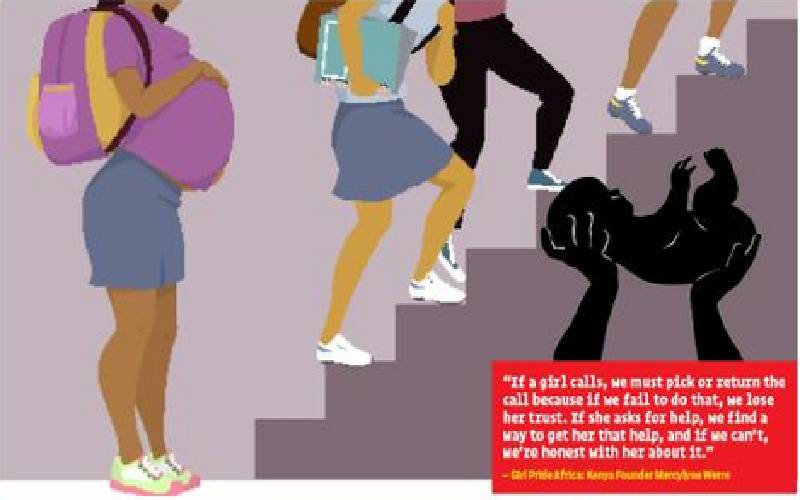 “If you haven’t gone out of your way to help anyone in this world, then you haven’t lived,” starts Mercylyne Werre.

She’s the founder of the Kenyan chapter of Girl Pride, an NGO that supports single mothers aged between nine and 23.

“It’s shocking to imagine a nine-year-old who’s pregnant, but as a nurse, I’ve seen girls of all ages walk through our dispensary doors. We’ve seen 16-year-olds come in for pregnancy tests and discover they’re not only pregnant, but HIV-positive as well.”

Eventually, Mercylyne decided she had to do more than just pass on a diagnosis.

“After encountering at least 300 of these cases in a span of six months, I couldn’t sit back anymore,” she tells Hustle.

Though still in its early days, Mercylyne’s vision is to champion education, support and behavioural change for young girls and women, particularly in Siaya where she lives. She shares her vision:

It’s disturbing to think of a nine-year-old child being pregnant. Why is this happening so rampantly in Siaya?

It’s not just Siaya. When I shared this issue with my husband who’s a statistician, he did some research and found similar cases in Homa Bay, Busia and Kakamega.

Culturally in these parts, sex is considered a taboo, something that shouldn’t be discussed with children. The problem is, because girls are starting their menstrual cycles earlier and earlier, they go out and experiment.

No one has talked to them about their changing bodies. They don’t know about abstinence, and they are completely ignorant about safe sex.

Take us through the NGO, what exactly do you do?

I work at a free clinic, so these girls come in to get pregnancy tests. That’s where I first encounter them.

Naturally, they’re afraid. Many of them are brought in by their teachers who suspect they are pregnant. Their parents have no clue and, in many cases, they don’t want us to get the parents involved.

At the clinic, the only thing we can do is encourage them to keep coming back for prenatal care. And then I speak to them about Girl Pride and tell them to come for our sessions and meet other mothers going through the same thing.

What happens at the sessions?

They take place twice a month. It’s an open forum where everyone can share their experiences. The one thing we try to instil in them is abstinence. We talk to them about staying in school because education is their only hope for a good life.

Even though we emphasise abstinence, we also talk to them about safe sex, not just family planning but using a condom to prevent infections.

Where are the fathers of their children?

Many of these girls are abandoned by the men as soon as they get pregnant. Some are thrown out of their parents’ homes as well.

We had a case of a girl, Ann*, who got pregnant a second time and her sister, who she was living with, kicked her out. We helped her find a small house and are paying her rent.

Because of cases like Ann’s, we realised we need to emphasize behavioural change, otherwise these girls will find themselves in the same unwanted situation again.

Ann, who didn’t have a job before, is now selling fish at a market. She wants to be a tailor and we’re working to get her into a course, and eventually open a small shop where she can practice her craft.

How do you finance your NGO?

When we started, it was mostly my husband and I who put in the money. We used Sh38,000 to register it. We also had to hire a hall for our meetings. The first hall we got cost Sh1,500 a day. Thankfully that cost has dropped to Sh500 because our church has allowed us to meet in their compound.

No, which is why we partnered with Girl Pride Africa. They haven’t come in financially yet because we’re still in the process of finalising our documentation.

Our board members, however, have pledged to put in Sh50,000 each by December this year. We will raise Sh200,000 from this. Our main goal is to buy a piece of land and build a Wisdom Centre.

What facilities will be available at the centre?

We want to have a clinic, a counselling centre and a training facility where we can teach the girls skills from which they can earn a living, like tailoring or hair and beauty services.

How many girls are you supporting in the programme?

Our first meeting had 37 girls. Right now, we’re at 100, and we want to keep the figure there for a while until we stabilise.

It isn’t easy, not just financially but emotionally as well. We have to ensure that once we bring the girls on board, we don’t let them down. Many of them have been through such hardship that they’ve lost faith in people. It takes time to build that up again.

We have a rule. If a girl calls, we must pick or return the call because if we fail to do that, we lose her trust. If she asks for help, we find a way to get her that help, and if we can’t, we’re honest with her about it.

What are your greatest immediate needs?

Strangely, it’s the simple things like baby clothes and diapers. One of our girls, she’s nine, comes from a family of seven kids. Her father is a fisherman, so he’s hardly home, her mother sells alcohol.

Their situation is so dire that she uses old lessos and plastic bags as diapers for her baby.

Another is trying to raise Sh1,700 to register for her Standard Eight exams. There are many similar stories.

Do you get overwhelmed?

Sometimes, but I’m a Christian so I believe God has placed me here for a reason and God will always open doors.

We have received a lot of assistance from the church, with members donating clothes.

We have also received help from a CBO (community-based organisation) run by Hellen Stahula. She donated sanitary towels to the girls. Help always comes.

We want to spread beyond Siaya to other counties with similar problems.

We want to build up these girls so that we leave them strong and independent.

One of the things we’ve done is started a chama. The girls contribute Sh20 every two weeks. The chama is three months old now, and they’ve managed to save about Sh12,000. It’s the small things. That’s what we teach them – start small, grow big.

By Winnie Makena | 16 hours ago

By Pauline Muindi | 16 hours ago

Five ways to boost internal communication in your business

Estate planning 101: Securing the future of family and business
Feedback