Rotten remedies: 9 disgusting things that are actually good for you 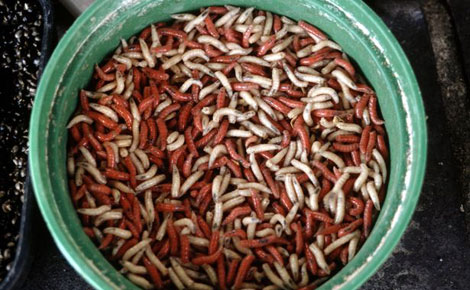 Research out this week revealed that exposing your little ones to dust mites could help prevent them developing allergies such as asthma and eczema.

But before you go 'ewwwww', remember we have a long and illustrious history of taking icky medicines and slapping on revolting potions to treat our ailments.

Check out these nine other gross-sounding treatments:

We're so used to getting jabs, we rarely stop to think about what they actually are. Every time you go for a vaccine, you are being injected with small amounts of the disease. It's the kind of thing that would have sounded like madness back in Victorian times when the practice first started to become widespread, but it's gone on to save millions of lives.

Once popular on Napoleon's battlefields for their ability to munch on rotting flesh (leaving room for healthy flesh to heal), maggot therapy has made something of a comeback in the last decade or so as bacteria grows resistant to anti-biotics. In fact, in 2004, the US Food and Drug Administration approved maggot therapy as a prescription treatment.

In New York a Shizuka NY Geisha Facial treatment contains the crucial ingredient of nightingale droppings. And if that's not enough to make you recoil, one session costs $180 (£106). Apparently Victoria Beckham is a fan... well, rather her than me!

So if you're currently going 'what, faecal as in... ?' then yep, you guessed it. This probiotic treatment is considered effective for treating certain bacterial bowel disorders and infections of the digestive system. It involves transplanting a healthy stool sample from a donor into the patient's digestive system, usually via enema.

Yes, this is actually a thing. Salons are now offering this treatment which involves massaging purified bull semen into the scalp and then leaving it to penetrate (sorry, couldn't resist) for 20 minutes. High in protein, it supposedly makes hair shiny and bouncy. Think I'll be sticking to my volumising mousse, ta.

Eating food off the floor

Forget the three-second rule. Scientists reckon eating food off the floor could actually help boost our immune system. In the same way that the dust mites can help reduce risk of allergies, exposing ourselves to moderate amounts of bacteria helps us develop natural immunity.

More a tasty snack than a 'treatment', it nevertheless deserves a place on the list. Once you've cracked open the hard, spikey shell, the Durian blasts you with the most pungent smell. Rotting manure, is one comparison made online... babies' nappies is another. Still, it's packed full of potassium and vitamins and apparently tastes like heaven. Well, it better had - it takes a serious leap of faith to put it anywhere near your mouth.

Hot flushes? Chances are if you're going through the menopause you've tried (or at least considered) HRT. The treatments, as you would expect, contain female hormones... but the sources can be quite unusual. One brand even uses the urine of a pregnant mare which is packed full of oestrogen.

No, you haven't been transported back in time to Shakespearean London. Leeches are still being used in modern surgery as a means of stimulating blood circulation in reconstructive surgery. Where extremities such as fingers and toes are reattached, it can be hard to get the blood to flow through damaged veins. Cue the leech whose bite (complete with handy anaesthic saliva) helps kick start the bloodflow.