Practical solutions to strikes are called for 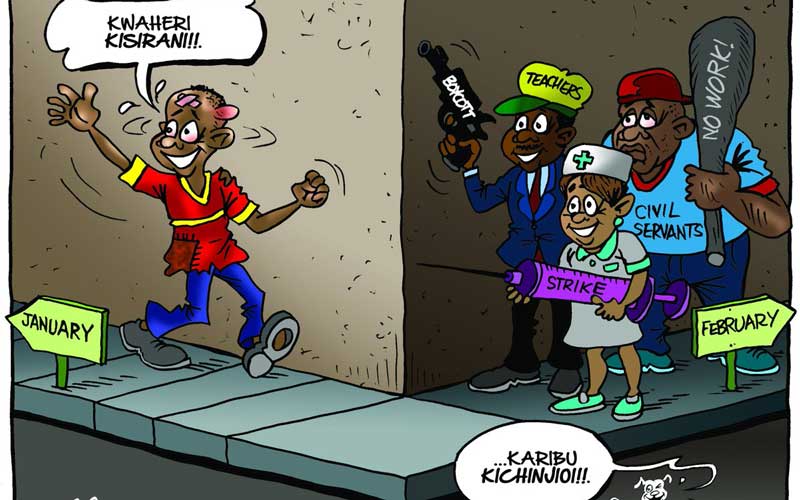 Kenya’s labour movement is arguably one of the best institutionalised labour market governance systems in Africa.

However, the persistence of labour unrests involving various workforces such as healthcare, Education, county workers and aviation points to the need for re-examination of the existing labour code in bid to address areas of weakness for sound economic growth.

This should be consistent with the national planning blueprint of vision 2030 and execution of the Big Four Agenda encompassing Universal Healthcare, manufacturing, housing and food security.

Historically, after decades of indecisive actualisation of labour rights for several categories of workers, the Government and social partners undertook a comprehensive reformulation of the labour laws that led to the enactment of five major laws in 2007.

In many respects, the new legal framework can be described as a favourable response to emerging labour market realities, particularly the changing composition of the labour force and structure of employment in Kenya.

It’s worth noting that the country has suffered perennial industrial action since the pre-colonial era. Teachers, nurses and doctors’ strikes are just a few examples.

The biggest challenge is that the pattern keeps recurring as witnessed in recent strikes by teachers, doctors, nurses, university lecturers and aviation staff among others yet the country does not seem to have lasting solutions.

Therefore, as Kenyan workers join their counterparts in other parts of the world to mark this year’s Labour Day on May 1, 2019, there is need to embrace social dialogue as a panacea to the incessant labour rows in the country.

Social dialogue behooves the Government, as both employer and regulator, to be more creative in dealing with public servants whenever they go or threaten to go on strike by avoiding a similar pattern of response each time there is a labour dispute.

The vicious cycle of strikes involving teachers, doctors, nurses among other category of workers require creative responses from government and other employers so as to limit their negative social-economic consequences.

Teachers, for instance, are a vital part of the workforce in any progressive society. Without their influence and input, there would be no proper avenue for learning and knowledge advancement. Such strikes are, therefore, disastrous. They paralyze society and disrupt service delivery with devastating effect on the economy.

History has it that since 1962, the first response to any industrial strikes has been confrontational and a State declaration on its illegality. This is normally followed by court battles that end up on the streets before the Government eventually calls a stakeholders’ meeting that comes up with a short- term solution.

The provisions institutionalise the right of workers to go on strike and framework on how parties should handle the process when it becomes a problem in labour management.

However, a truly unique problem needs a new solution and structures for solving similar problems in future. An exceptionally unique problem, by its nature, is solved once and for all as it will not occur again.

This is not the case of labour strikes in the Kenyan situation since one can reliably predict that they will be called by the respective unions leadership and members in the near future hence qualifying industrial strikes as generic problems.

The trend has always been: workers demand a pay rise; the government responds, workers announce a strike; the government declares it is illegal and threatens them with the sack and court action; the strikes takes place anyway; the workers and government negotiate and a ‘return-to-work formula’ is agreed on. Eventually, the next strike call comes and the cycle is repeated.

The solution calls for an immediate different strategy of approaching industrial action in the public sector. This involves stakeholder engagement for long-term solutions, rather than short-term ones.

It also requires the Government to develop relational intelligence that enhances the engagement of all legitimate stakeholders on a negotiated settlement to stamp strikes out of Kenya.

The idea is to give notice of the dispute and an opportunity to the employer to try and resolve the matter amicably and thereby avoids over legalizing.

The approach helps institutionalize progressive social dialogue mechanism in the labor dispute management in an anticipatory manner. The persistence of strikes in various sectors point to the necessity of a more in depth review of existing engagement of Labor actors in Kenya.

Dr Olayo is a certified HR Practitioner and Governance expert