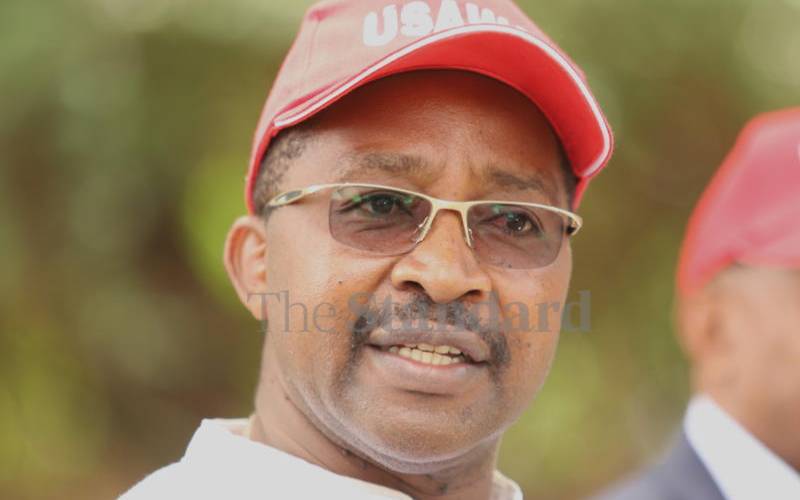 Murang'a Governor Mwangi wa Iria (pictured) has named Alfayo Onyambu as his running mate as he forges ahead with his presidential campaigns for the August 9 General Election.

The Usawa Kwa Wote party presidential nominee unveiled Mr Onyambu, a politician who vied for the senate in the 2017 elections on a Jubilee Party ticket.

The governor, who is serving his second term and is constitutionally mandated to step down, announced his ticket mate ahead of the May 16 deadline when names are expected to be presented to the Independent Electoral and Boundaries Commission.

Onyambu has built a career in the transport sector, working at senior levels at the National Road Safety Agency and Kenya Transport Association.

He also served as a board member of the Kenya Port Community members association.

Iria said he is running for president to empower farmers and put money in the pockets of the common man. "For the last few years, Kenyan farmers have suffered low income from their produce. My government will prioritise agriculture and make it profitable for all Kenyans. Farming can uplift the living standards of all Kenyans if it gets adequate support from the government," he said after naming his running mate.

He said Onyambu is a polished professional ready to work for the common man and unite Mt Kenya, Kisii residents and the rest of Kenyans. "Unity bid must start from somewhere and that is why Usawa Kwa Wote party want to begin by uniting Gikuyu community with the Kisii, who are both renowned business people," said Iria.

Onyambu thanked Iria for picking him as his running mate and promised to campaign for Usawa Kwa Wote across the country beginning with Kajiado County. "We want to demonstrate that voters are won on the ground and during face-to-face engagements with them and not in hotels and boardrooms," said Onyambu.

To cater to guests travelling between Nairobi and Kisumu, Kenya Airways has introduced discounts of up to 20 per cent on its Business and Economy Class on its flight services.

The woes of Nyeri tourists’ establishments continued to pile after the iconic White Rhino hotel was put up for auction.

By Wainaina Ndung'u | 1 day ago

By Wainaina Ndung'u | 5 days ago