By Patrick Alushula and Macharia Kamau | May 22nd 2022 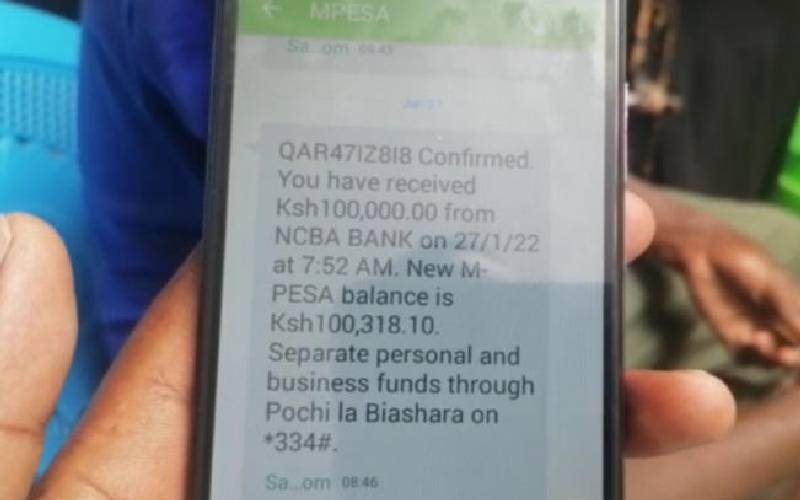 Safaricom’s customers transacted Sh29.5 trillion shillings through M-Pesa in the year to March 2022, showing how key the mobile money platform has become to Kenya's economy.

The value of M-Pesa transactions grew 34 per cent from Sh22 trillion in 2021 and has more than doubled when compared to Sh13.94 trillion transacted in 2020.

The growth in the last two years has also been partly aided by the measures put in place by the government in 2020 to cushion Kenyans from the harsh effect of Covid-19. These included zero-rating charges on transactions under Sh1,000.

Safaricom had said it was unsure whether customers who had transacted on M-Pesa because of waiver of fees on transactions below Sh1,000 would stay after the charges were reinstated.

It turns out the new customers who joined during Covid-19 found value in the service and the telco did not see a drop in the average monthly users of M-Pesa even after it reinstated charges on low-value transactions.

M-Pesa’s growth is also seen in the earnings of Safaricom, with the service parting ways with revenue streams such as voice, data and text messaging to become the cash cow for the telco. M-Pesa has transitioned into a universal payments ecosystem and is our leading revenue contributor. Fintech solutions including payments, lending and savings and International Money Transfers (IMT) continue to drive stickiness in the ecosystem,” said Dilip Pal, the chief finance officer at Safaricom.

“We have established a business that enables millions of businesses and individuals to connect and grow while contributing significantly to economic development. M-Pesa is the key player in the payments ecosystem driving financial inclusion matrix for the country.”

M-Pesa accounted for 38.3 per cent of Safaricom’s service revenue. The firm’s revenues stood at Sh281.1 billion, with M-Pesa bringing in Sh107.69 billion. Revenues from the mobile money service could have been higher were it not for the fact that some of the services, such as funds transfer to banks, are still free.

Voice and messaging – which were for years the mainstay of the company – posted a revenue of Sh83.21 billion, accounting for 33.5 per cent of the revenue.

Over the period to March 2022, revenues from messaging declined 20 per cent to Sh10.88 billion. Voice revenue is coming under threat as people turn to over the internet calls. Safaricom chief executive Peter Ndegwa said last November that voice is a mature segment and not much growth is expected going forward.

“We are not messaging that we think that there will be significant growth in the future. What we do know is given our scale we do need to defend the actual segment and ensure that we keep our customers engaged,” he said.

The firm echoed these sentiments during the recent release of full-year results. Safaricom said the drop is expected as customers shift to other messaging platforms such as WhatsApp.

This, Safaricom said, was “in line with global industry trends as customers migrate to newer technologies.”

Revenues from mobile data grew 8.1 per cent to Sh48.44 billion. The firm noted that revenue could have been higher but growth was “weighed down by absorbed excise duty adjustments from August 2021 which slowed down industry momentum and price rationalization”.

Safaricom’s strategy is to spread its tentacles into multiple areas besides telecommunications and finance.

The company has already tapped into health, education, e-commerce and agriculture. But in all these, it has always found a way to fit in the M-Pesa.

Safaricom is also waiting on regulatory approval from the Central Bank of Kenya (CBK) to launch its investment platform, Mali, which will allow subscribers to invest in unit trusts with as little as Sh100 with interests of up to 10 per cent annually.

The combination of Mali, Fuliza and the revamped M-Pesa business app means both individual users and those running SME accounts on Safaricom will have little incentive to leave the telco’s digital finance ecosystem.

The deep foray into financial services, where the firm already controls substantial aspects, could rekindle the debate on whether the firm is too big to the disadvantage of other industry players, consumers and even new entrants into the sector.

But the telco is already seeing a new opportunity should M-Pesa be split from Safaricom.

Safaricom wants M-Pesa to start issuing high-value lending such as car loans if the proposal to split the mobile money platform from the telecommunication business is approved.

Michael Joseph, the Safaricom chair said the separation will see Safaricom remain under the Communication Authority of Kenya (CA) while M-Pesa will be regulated by the Central Bank of Kenya (CBK), allowing it to deepen its financial services.

“What may happen is maybe if we took M-Pesa out of Safaricom and it was regulated by the CBK, we could then apply to the CBK to offer more services that are not necessarily telecommunication-related,” said Mr Joseph.

“It could be financial services. We could lend you money to buy a car. We can’t do it today. So there is opportunity to give more range of services which to choose from.”

The move promises to see Safaricom, which rolled out M-Pesa in March 2007, take financial services competition closer to the doorsteps of banks which had initially resisted the launch of the ground-breaking idea.

Former directors have been battling to stop the prosecution for eight years. Dispute started in 2014 when the four resigned and started Cytton Investments Limited.