Economic lessons for our leaders from Ukrainian-Russian conflict 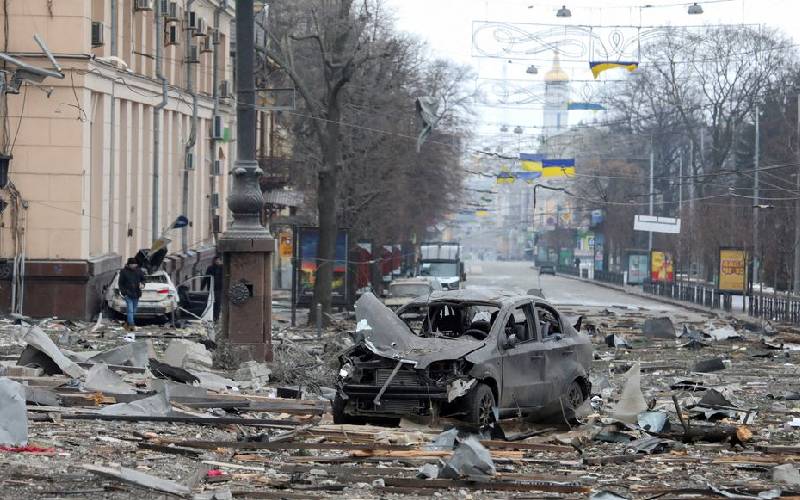 In his biography, Bill Clinton asserts that we are defined by both the opportunities we take and those that we do not take.

Back in July 2014, I got two equally competing opportunities to head either to Eastern Europe or Asia on study. The decision criteria eventually narrowed down to two barriers: the cost of relocation and language of instruction. That meant I miss the opportunity to experience how it feels like to live in Eastern Europe, the current theatre of the Ukraine-Russian conflict.

Instead, I headed to Asia and had a chance to witness firsthand what it takes to transform a poor nation into one of the fastest emerging economies of the world. With a declared intent to become the world’s economic power house, my professors took it upon themselves to demonstrate how the Chinese communism system was different from that of Russia.

In my tour of study in Asia, I was mostly excited and intrigued by the contestations of the world’s political economy presented in our classes. Today and the reason this page exists is to relate complex socio-economic and political relationships, explain their meaning to ordinary folks and how they affect their day-to-day life. These are the dividends from my long and lonely nights in a foreign capital.

As it turns out, turning a nation into global economic powerhouse is not a dash to the finish line. It is an outcome of a single mindedness of thought to align public policy, government spending, private sector commerce and the physiological and mental orientation of the nation’s human capital. To achieve this goal soonest, these actions have to be executed with a sort of military precision.

In simple terms, nations that seek to lead/rule the world at some point in the future must ensure everything they do is in sync with their goals. The rest of us are expected to see the world under their lenses.

Being students in the Chinese premier applied Macroeconomics University, that meant no single lesson could end without drawing comparatives of the tripartite nature of the world economic order. Everything had to be analyzed in view of the US and European capitalistic system, the Russian version of communism and the Chinese communist system modeled to integrate beneficial attributes of the Western capitalism. Our professors rarely ever mentioned the Japanese economic system.

For those who understand the economic and political system of this dragon country, they would understand that also reflected the thinking of their government. But it was always implied that the Japanese and the Oceania nations of Australia and New Zealand were ideologically and philosophically part of the Western economic axis. One thing that pricked my curiosity mostly was where exactly to place Russia in terms their economic philosophy and ideology.

After exploration of several documented expert opinions, the convergence narrowed down to ‘it all depended on what its leader, President Putin’s thoughts were at any point’. While geographically Russia is largely in the Asian continent, its economic philosophy was oriented towards Europe when it suited its leader. However, overtime the president has moved the nation towards the Asian side where he has found some cozy allies politically and ideologically.

This perhaps would explain why about 77 per cent of Russia’s populace lives on about 23 per cent of the country’s land size along the European side. After the collapse of the USSR in 1991, the Russia economy got significantly interconnected with Western financial markets and hence the global financial system. According to Investopedia, the Russian Economy is ranked at number 11 in the world, with a nominal Gross Domestic Product of US dollar 1.48 trillion, at current dollar values and as at 2020. The per capita income is estimated at US$ 10, 127 (Sh1.154 million) at current exchange rate.

It is thus common to hear references about Russia Europe and Russia Asia to describe the diametric sides the Russian Economy. While I reserve my personal opinions about the ongoing conflict for the sake of my diverse audience in this space, we cannot wish away the immense economic and leadership lessons that have emerged from the conflict. Two important questions easily emerge: One, are their lessons that our policy makers and political elites can learn from this conflict? And two, what can we do as a nation to align our economy to the emerging economic order?

The first significant lesson from this conflict is that wars in the 21st century will not be about guns and boots in the battle field. Battles have shifted to economic, technological and interconnection of nations into the global economic systems. While the world’s super powers have restricted their engagements to providing military, logistical and humanitarian aid to the aggressee (Ukraine), they have inflicted stinging pain to the aggressor (Russia) through economic sanctions, disconnections from the global economic system, deprivation of essential technologies and cyber-attacks.

Coming from the devastating impacts of Covid-19, it would be interesting to see how long the Russian economy can hold. In barely a week into the sanctions, Russian financial and stock markets have experienced devastating hemorrhage of capital. Their Central Bank hiked the base interest rate from 9.5 per cent to 20 per cent to cushion household wealth from been depleted by expected high inflation. This also signifies the government’s desire to mob-up liquidity from the domestic economy to finance the war or stabilize the local financial markets. The net effect is to deprive local businesses access to financing and thus may soon experience crippling cash flow problems. Consequent impacts shall reflect in domestic employment levels.

Second is that the only safe haven to keep wealth at both the national and individual level is within the domestic economy. The sanctions have targeted Russia’s sovereign wealth and that of its oligarchs believed to be close to the countries leadership. Traditional safe havens such has Singapore, Switzerland, South Korea among others have departed from tradition to join in the freezing and blocking Russia from the world economy.

With a stroke of a pen, dollar billionaires have been reduced to regular mortals in Russia. The question that remains is for how long will these oligarchs remain loyal to president Putin? Will their political influence in the country hold with their economic power base having been dismantled? These are vital lessons to our shadowy confessed ‘deep state’ billionaires that believe they can tilt our democratic systems at will. Unfortunately, it is turning out that the only sure insurance to any individual and collective national wealth is a robust socio-economic wellbeing for at least majority of the country’s populace. The growing inequality fueled not by entrepreneurship but siphoning of public resources for personal profits by those with access to state power is a time bomb.

Third is that in as far as possible, policy makers must shift the economy to build safety nets for some basic self-reliance. The Russian economy has leaned heavily on huge defense expenditures and State control through huge state-owned corporations. With the withdrawal of the western technological innovations that define the modern world economic order, Russia and its citizens have been left extremely vulnerable.

Finally, the Ukrainians have demonstrated a rare sense of patriotism. Ordinary citizens have abandoned their professions, way of life and taken arms to defend their country. This response will ultimately be definitive as to whether the Russian military mighty prevails or not. The Russian soldiers have to content with an enemy probably never factored in their military planning.

All public roads will have lanes or tracks for exclusive use by pedestrians in a proposed law seeking to enhance safety.

In a statement to newsrooms RBA’s chairperson, Victor Pratt announced that Mutuku who has worked with the parastatal for over 22 years will proceed on

By Dominic Omondi | 39 seconds ago

By Nancy Nzau | 5 hours ago