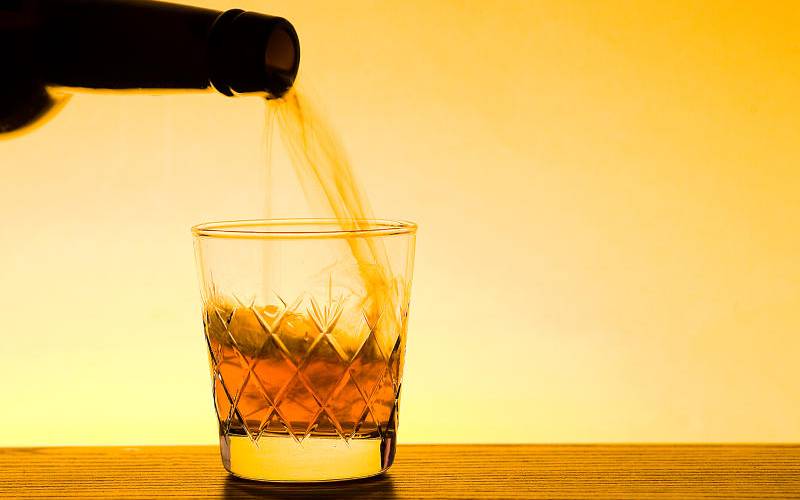 The outbreak of Covid-19 pandemic triggered a frantic crusade for Kenyans to stay at home to avoid contracting the deadly disease.  But tipplers, who rued the closure of bars and night clubs, would not go home without a sip of their favourite drink.

When Kenyans became broke and were denied even the power of touch by the pandemic that pushed them into their own cocoons, hard liquor became their beloved company. It kept them sane.

They religiously drank rivers upon rivers of whiskey, vodka, gin and rum - like an ocean. It was a boon for the taxman. Data from the Economic Survey 2021 shows that while tax revenues from most excisable products plummeted, that of spirits rose by 15 per cent in the period ending June 2020.

The Kenya Revenue Authority (KRA) collected an increased Sh15.7 billion from wines and spirits in the financial year 2019-2020 compared to Sh13.6 billion in the previous fiscal year. This even as excise duty from beers reduced by more than a third from Sh27.8 billion to Sh19.1 billion.

“The decrease in excise revenue from beer could be attributed to the closure of bars and other entertainment joints owing to the Covid-19 restrictions while that of financial transactions was as a result of waivers in some transactional costs,” read part of the Economic Survey, which showed that close to 738,000 jobs were lost last year, even as the size of the economy contracted by 0.3 per cent.

To discourage people from touching money and spreading Covid-19, the Central Bank of Kenya (CBK) waived fees on the transfer of sums below Sh1,000 on mobile phones.

Generally, total excise revenue collected from locally manufactured commodities and services amounted to Sh102.7 billion in 2020, a decline of 12.1 per cent from Sh116.9 billion collected in 2019.

However, consumption of beer has not grown as fast as that of spirits.

Even before the pandemic struck, the flow of premium beer - normally packaged in slim green bottles - from countries such as the Netherlands (famous for Heineken) and Denmark (the home of Carlsberg) had alarmingly been reducing to a trickle.

Not that Kenyans had suddenly become teetotalers. If anything, they were drinking even more “hard stuff.”

Even as the shipment of beer into the country declined, there was a substantial increase in imports of hard liquor, pointing to a change in taste and preferences among Kenyan imbibers as the green revolution gives way to the gin revolution.

Unlike beer, which is mostly made in Kenya, a good chunk of the spirits are imported.

The leading source of hard liquor is the United Kingdom, the home of Scotch whisky, where Kenya got more than a third of its spirits in 2019.

Tanzania is the source of a Konyagi, a popular low-end rum, whose consumption in Kenya has grown in leaps and bounds since 2011.

The litres of spirits imported into the country since 2010 have increased more than ten-fold from 1.93 million litres to 11.2 million litres in 2019, data from the Kenya National Bureau of Statistics (KNBS) reveals.

It then staggered up to stand at $8.9 million (Sh907.8 million) two years ago. The increase in sales of spirits has also been a boon to the taxman.

The State’s revenues from excise duty levied on wines and spirits increased by a blistering 529 per cent in the period under review, according to official data. In 2011, the taxman collected only Sh2.16 billion from wines and spirits, but this shot up to Sh13.6 billion by the end of 2019.

On the other end, excise duty on beer has increased by only 89 per cent during the period under the review, with the tax authority collecting Sh27.8 billion from the alcoholic drink by the end of 2019.

Consumption of spirits also seems to have benefited from the downturn in beer sales due to the closure of bars and a significant increase in prices per unit of beer last year, according to a report by Euromonitor International.

With pubs either closed or operating fewer hours, there has been an uptick in wines and spirits shops. Products such as Gilbey’s Gin sold by the East African Breweries Ltd (EABL) has been a major beneficiary of these restrictions, translating to the emergence of what some have described as the Gin Revolution.

Interestingly, in the first nine months of the 2020-21 financial year, KRA collected Sh162 billion from the industry, surpassing its target of Sh153 billion.

Analysts attribute the prodigious consumption of spirits to a growing middle-class with a taste for finer things, including whisky and rum, improved earnings and lifestyle change.

KTDA boss Tiampati exits firm under a cloud of investigations

Chief executive and senior managers were sent on compulsory leave last year amid allegations of impropriety.

Until October next year, all the samples from more than 75 participants will be exhibited at "Soko la Indonesia" at the Embassy.

By Frankline Sunday | 49 minutes ago