Kenyans in formal employment make the majority of those who seek loans from digital lenders, a new report has revealed.

The report released on Wednesday says 65 per cent of formal workers borrow from the online lenders, followed by those in the informal sector at 59 per cent.

The unemployed, at 39 per cent, make up the least in the population surveyed of people who borrow from digital lenders.

Digital financial consumer protection: A relook into marketing and advertising practices in Kenya

The report, titled State of Digital Lending in Kenya 2021, is by Reel Analytics, a consumer intelligence firm whose business portfolio includes branding, marketing and communication.

“Digital credit uptake is highest among Kenyans employed in formal sector; this is mainly attributed to repayment surety based on a regular monthly salary,” it says.

The data was collected between June 3 and June 22 via phone interviews among 1,000 Kenyans selected through a random sampling technique.

M-Shwari is the most popular among five key digital lending platforms, influenced by its connection to the leading mobile service provider, Safaricom, at 40 per cent followed by Tala at 36 per cent, Fuliza 30 per cent, Branch 23 per cent and KCB-Mpesa at 22 per cent.

“Majority of Kenyans prefer digital lending platforms due to their convenience and easy access of loans compared to acquisition of loans from other credit service providers such as banks and Saccos,” the report says.

In the absence of digital lending platforms, the report says, most Kenyans would seek business growth loans from sources such as close family members. 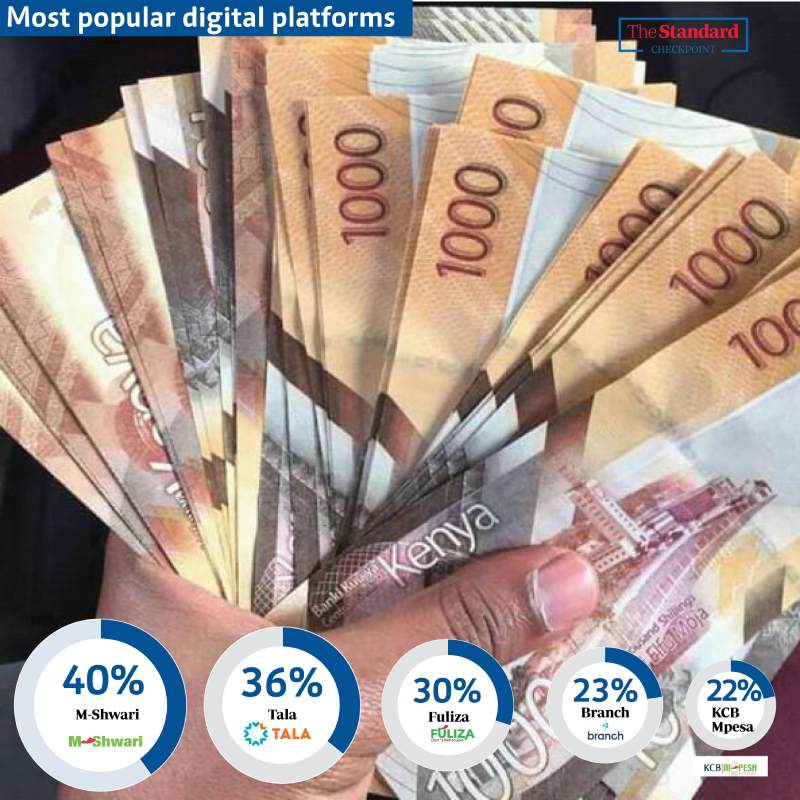 Borrowing within family circles is, however, considered less convenient as loan accessibility is usually unpredictable and amounts smaller compared to official sources such as digital lenders.

“A majority (over 60 per cent) of customers are satisfied with the services of digital lenders and that there really aren’t strong formal or institutional alternatives to digital lenders,” says the report.

Forty per cent of Kenyans interviewed in the report said they would borrow from relatives as their prime alternative to digital lenders compared to just 10 per cent who would opt for banks and Saccos.

Ninety-two per cent of those interviewed said interest rates charged by digital lenders were not a factor limiting their access to credit.

Key factors were ease of access at 39 per cent and speed of disbursement at 22 per cent.

Men dominate the borrowing from digital lenders at 59 per cent due to multiple use of the platforms, followed by women at 41 per cent. Women are considered more ‘loyal’ and ‘default-concerned’ borrowers.

While the rate of loans uptake was high among the employed, absolute numbers of self-employed people taking digital credit was higher.

By World Economic Forum | 18 hours ago

By World Economic Forum | 18 hours ago