US needs new understanding with China or it risks conflict, Kissinger says 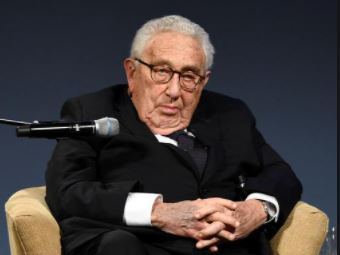 The United States will have to reach an understanding with China on a new global order to ensure stability or the world will face a dangerous period like the one which preceded World War One, veteran US diplomat Henry Kissinger (pictured) said.

Kissinger, now 97, influenced some of the most important turns of the 1970s while serving as secretary of state under Republican Presidents Richard Nixon and Gerald Ford.

Speaking at a Chatham House event in London via Zoom, Kissinger said the ultimate question was whether or not the United States and its Western allies could develop an understanding with China about a new global order.

"If we don't get to that point and if we don't get to an understanding with China on that point then we will be in a pre-World War One-type situation in Europe, in which there are perennial conflicts that get solved on an immediate basis but one of them gets out of control at some point," he said.

"It is infinitely more dangerous now than it was then," Kissinger said. He said the high-tech weaponry on both sides could lead to a very gave conflict.

Amid worsening relations between China and the West on a range of issues from human rights and trade to Hong Kong, Taiwan has said China is bolstering its ability to attack and blockade the China-claimed island.

Kissinger said the United States would likely find it difficult to negotiate with a rival like China that would soon be larger and more advanced in some areas.

The other question, he said, was whether or not China would accept that new order. Kissinger praised China's skill at organising itself for technological advance under state control.

But he said the West had to up its game. "The West has to believe in itself," Kissinger said. "That is our domestic problem - it is not a Chinese problem."