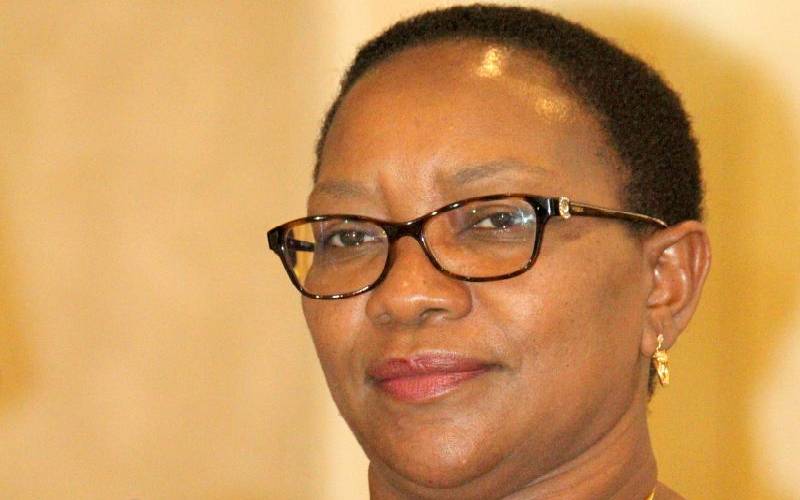 Water Cabinet Secretary Sicily Kariuki’s (pictured) name was yesterday dragged into questionable expenditures where a helicopter hired by the National Youth Service (NYS) at Sh7.7 million was diverted to drop her at Windsor Hotel for a private engagement.

Kariuki was also put on the spot for spending Sh2.3 million – which was not budgeted for – to hire toilets and catering services during a one-day meeting she presided over at Gilgil National Youth Service (NYS).

Members of the Public Accounts Committee (PAC) yesterday heard that NYS was billed for the chopper ride to the hotel despite it not being part of the itinerary that was requisitioned by the accounting officer.

According to the Auditor General report, Sh7,739,513 was paid to a service provider for the provision of helicopter services to NYS staff travelling to various destinations.

Public Service and Youth Affairs Principal Secretary Mary Kimonye and NYS Director-General Matilda Sakwa declined to name Kariuki as the officer who used the helicopter against a sustained push by the committee chaired by Ugunja Member of Parliament Opiyo Wandayi to confirm it was her since she is the one who served in the docket during the period under question.

In a written submission, PS Kimonye told the committee that the chopper was used to give a ride to “a senior officer” who was coming from a field activity to an official function at Windsor, Nairobi.

One of the officers in the company of the PS upon probe by the MPs said it was “the CS” but declined to go on record on further inquiry by the committee members.

Kariuki served as the Cabinet Secretary for Public Service, Gender, and Youth before she was moved to the Health docket and subsequently to her current docket of Water and Sanitation.

“Madam PS please confirm to this committee that the person who used the helicopter in question was the CS. And please before you answer your question remember if you continue to be protective of her this can go down on you very badly,” said Wandayi.

Wandayi said the committee will consider inviting Kariuki to respond to some of the audit queries, including the expenditure on the hiring of the toilets.

“This matter of hiring toilets as we can clearly see is a litany of irregularities, illegalities, and impunity by the CS yet this was her meeting. It goes without saying that Sicily Kariuki who was responsible for the hiring of the toilets is the same CS who used the helicopter for her detour to Windsor hotel,” said Wandayi.

Garissa Township MP Aden Duale threatened sanctions against the PS for trying to conceal information from the committee investigating questionable expenditures by the service.

“You cannot hide the details from us, if we want to know who this person is, we will know, we will just call Kenya Airports Authority and get the manifest. We can also get this information from the intelligence personnel who were present when the CS boarded the helicopter,” said Duale.

Funyula MP Wilberforce Oundo also took issue with Kimonye’s failure to reveal the name of the person who boarded the helicopter.

“You cannot tell me for all these years, madam PS, you have never been bothered to know who is this nameless person who used the helicopter. If you continue like this the committee will cite you,” said the MP.

The committee also demanded to know how the CS authorised the expenditure of Sh2.3 million to be spent to hire toilets and catering services without any due process.

“Further, the letter of invitation listed the attendees from various stations whose attendance registers have not been provided in support of the expenditure of Sh2,330,000,” states the audit report.

Oundo said it was baffling the ministry spent such kind of money to hire toilets yet the facility has toilets.

I gave my boss an ultimatum and became jobless

If you have identified your deal breakers or evaluated your decisions, do not second guess yourself