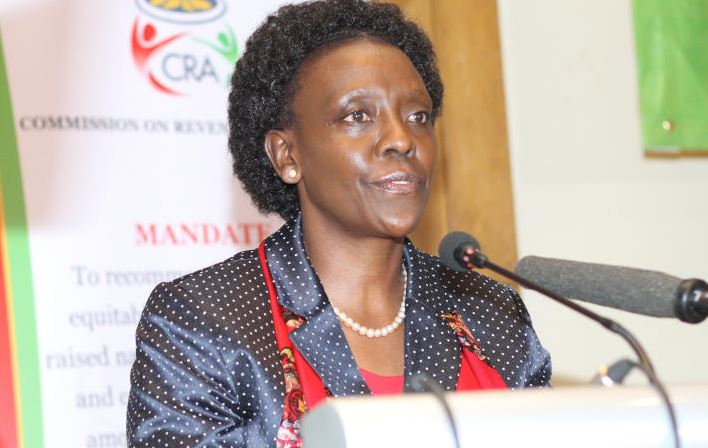 When the Kenya National Bureau of Statistics (KNBS) unveiled a report that showed the wealth of different counties, Jane Kiringai (pictured), the chairperson of the Commission on Revenue Allocation (CRA) welcomed it, saying it would demystify a lot of things.

“We know that, for the first time, Nairobi does not contribute 60 per cent of GDP (gross domestic product),” Kiringai said.

She also hinted at the use of the results in allocating resources to counties.

Earlier, KNBS had unveiled the 2015/16 Kenya Integrated Household Budget Survey (KIHBS), which mapped out the well-being of Kenyans living in various counties.

It highlighted, among other things, poverty and unemployment levels as well as access to healthcare facilities.

This report, together with the census data that came out in 2019, would later end up being critical in designing a new revenue-sharing formula.

Among the KIHBS recommendations for increasing incomes and reducing inequality in Kenya was putting in place policies that would ensure higher overall economic growth, and a shift in the distribution of incomes to favour poor people.

However, when CRA finally presented its recommendations on the third basis for equitable sharing of revenue among county governments, it ended up being a highly divisive formula that threatens to shatter political alliances.

In making the case for this latest formula, the commission said it seeks to enhance service delivery, promote balanced development, encourage counties to raise their own cash and prudently use public resources.

If approved, it will be used for the sharing of equitable revenue for the 47 counties over the next six financial years.

The Treasury has set aside Sh316.5 billion to be shared out among counties in the 12 months to June 30 next year.

Unlike the second formula that uses six variables to decide how much a county gets, the latest proposal looks at 10 parameters.

But critics of the new formula believe it hurts, rather than helps, the poor. Those for it, who use the mantra “one man, one shilling, one shilling”, insist it will banish poverty in Kenya.

However, on the surface, the new revenue-sharing formula attaches less significance to poverty than previous formulas. Indeed, the weight of the poverty index has been shrinking since Kenya embarked on implementing devolution seven years ago.

Under the first formula, the poverty index had a weight of 20 per cent. It then went down to 18 per cent in the second model and has taken a significant dip to 14 per cent under the latest proposal.

Outside of the minimum basic share (20 per cent), population remains the most significant parameter, with a weight of 18 per cent - under the previous two formulas, it was weighted at 45 per cent.

Health, a new entrant, is being weighted at 17 per cent. Poverty then becomes the fourth weightiest variable. Generally, poor counties, and particularly those with a high share of very poor people as calculated by KNBS, seem poised to lose more than they gain.

The 10 counties with the highest number of poor people stand to lose a collective Sh4.4 billion under the proposed formula, going by CRA calculations.

This dip is calculated against what they earned in the previous financial year under the second basis of revenue- sharing. 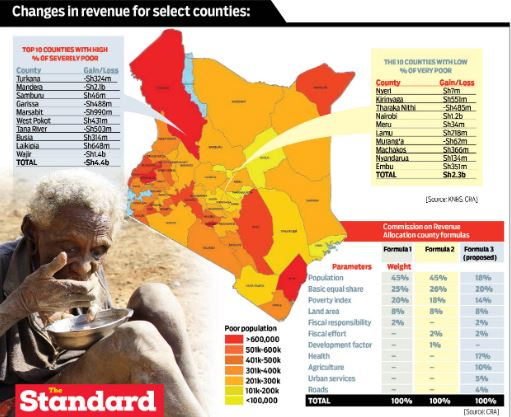 Mandera, the county with the second-highest number of poor people after Turkana, would be the biggest loser with Sh2 billion.

Wajir, tenth on the list of poor counties, would lose Sh1.4 billion. Marsabit, Kenya’s largest county and the fifth poorest, loses Sh990 million. Tana River, another poor county, would lose about half a billion shillings, while Turkana would lose Sh324 million.

However, Laikipia, which has a large fraction of severely poor people, would gain Sh648 million and West Pokot would get an additional Sh431 million and Samburu Sh46 million.

When you look at the 10 counties with the lowest percentage of very poor people, however, they stand to gain a total of Sh2.3 billion.

Rather than allocate resources to counties based on how poor they are, the CRA formula seeks to instead move the resources to critical services, such as health and agriculture, which has a weight of 10 per cent. These constitute the service delivery component.

With a lot of people paying for healthcare from their pockets, health spending has left many of them poor. Thus, if counties can be helped to make critical healthcare services available, this would go a long way to alleviating poverty.

Moreover, because poverty is mostly a function of food, those pushing for the new formula argue that it is the best way to tackle poverty.

But rich counties have gained more from the focus on these services than poor ones. Take, for instance, how the health metrics have been computed.

Items worth millions belonging to Tuskys Supermarket will be sold through public auction.