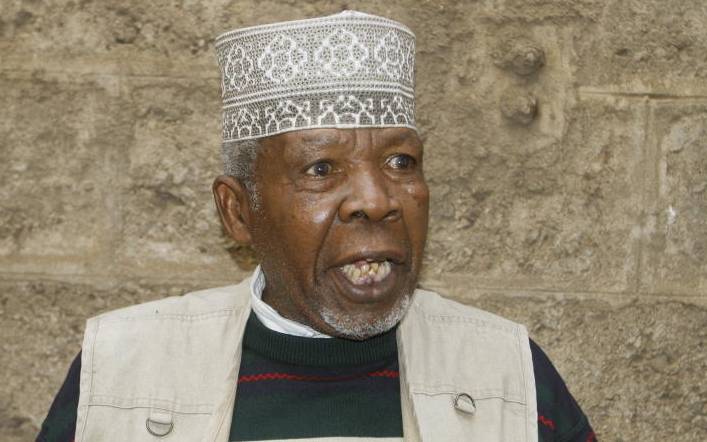 Kenyans from all walks of life, especially Kiswahili lovers, jammed social media yesterday to pay tribute to the veteran poet, Mzee Abdallah Mwasimba (pictured above), who died on Tuesday.

The 83-year-old Kiswahili poet rose to fame as his poems got published in print media and his recordings ran on TV stations, mostly in the Kenya Broadcasting Corporation.

The family said Mzee Mwasimba had been having ill-health for six months.

Born in Matuga in Kwale County in 1937, Mzee Mwasimba was also an actor who popularly played educative skits on family values, culture and patriotism.

“I first met the departed Swahili guru and poet through KBC Swahili service. By then, I was still a small boy in primary school. During those days, the late Mwasimba used to nourish our Swahili language through his poems in a 15-minute mashairi (poems) programme that was then produced and presented by Khadijah Ali,” said Radio Maisha broadcaster and sports commentator Ali Hassan as he mourned the man who inspired him.

“Though the programme is still on, Mwasimba paved way for up-coming poets like Omar Mwagao and others, and joined Nation Media Group where he continued nurturing Swahili language and up-coming poets in the Taifa Leo newspaper,” recalled Hassan, also a lover of Swahili poetry.

Describing him as a down-to-earth and humorous orator, veteran TV presenter Swaleh Mdoe said Mzee Mwasimba was a great gift to the new generation of Swahili anchors and authors who would use his poems as well as consult him for inspiration and direction.

Former KTN anchor Mwanaisha Chidzuga, said: “I wouldn’t say I knew him so well but the fact is that he influenced many Swahili broadcasters, especially those who loved poetry. A good example is Khadijah Ali who produced the show he presented.”

Khadijah Ali, Mzee Mwasimba’s former producer, said: “I worked with Mzee Mwasimba from the 1980s when KBC was actually called VoK (Voice of Kenya). The man loved his job and had this unique voice that cannot even be replaced. His talent was rare to find.”