Guardian bank has temporarily closed one of its branches in Nairobi following reported cases of Coronavirus among members of its staff.

The Westlands branch will be closed from Wednesday for one week for fumigation and safety protocols.

The lender becomes the second bank to close a branch after the employees test positive for the disease.

In May, the Kenya Commercial Bank closed its Mvita branch in Mombasa after an employee tested positive for Covid-19. Outside banks, the Kenya Power, and Safaricom have also in the past slowed down operations in some of their branches after reported cases of the disease among staff.

Guardian bank rerouted its customers during the closure period of Westlands branch to its other outlets spread across Nairobi. 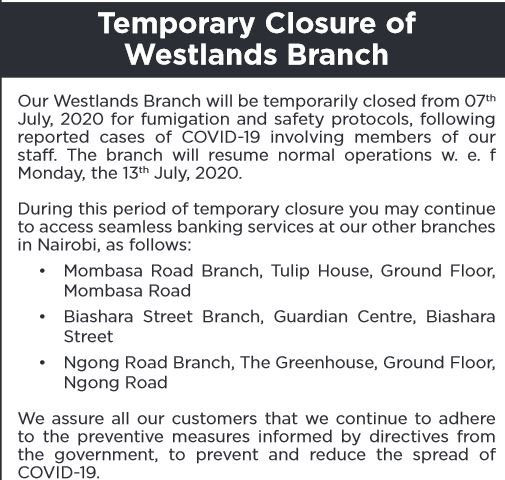 The Ministry of Health has reported 278 new coronavirus cases from 3,053 samples tested in the last 24 hours, raising the number of cases in Kenya to 8,528.

Updating the nation from Wote, Makueni County, Health CS Mutahi Kagwe said the total number of tests done since the first case was reported in March stood at 196,508.

Eighty-nine patients had also been discharged from various hospitals bringing the total number of recoveries to 2,593.

Unfortunately, two patients have succumbed to the virus raising the fatalities to 169.

On Monday, President Uhuru Kenyatta called on Kenyans to prioritise health measures currently in place to curb the spread of the disease as he unveiled phased re-opening of the country.

He rolled back travel restrictions placed to tame the spread of Covid-19 as he seeks to strike a balance between containing the disease and stopping the economy from sinking to new depths.