The coronavirus pandemic sent the Treasury mandarins back to the drawing board, abandoning austerity to cushion the economy, which is expected to slow down to the lowest point since the 2007 post-election violence.

Kenya was already out of breathing space, with huge debt repayments and stagnant taxes but is now expected to spend more without borrowing itself into a crisis.

In the Budget estimates the national government had projected it could cut expenses for the first time from Sh1.836 trillion to Sh1.804 trillion but now it has been forced to ramp up spending to Sh1.883 trillion. 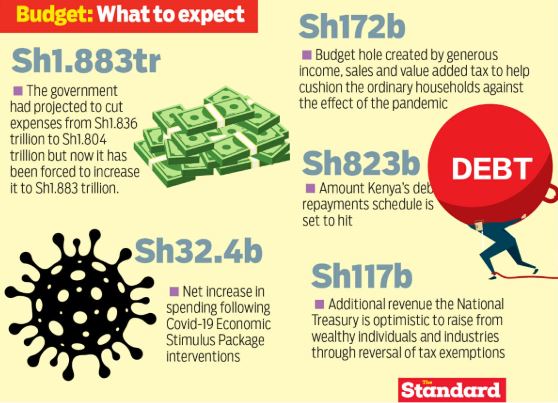 Treasury Cabinet Secretary Ukur Yatani’s first Budget has come under the spotlight on how he will balance the bigger budget against shrinking revenues as businesses shut down, workers lose jobs or face pay cuts and exports decline on supply chain interruptions.

The arithmetic whose finer details would be unveiled today must have been tough.

The government has indicated its intention to support specific crucial sectors of the economy from collapsing altogether while cushioning vulnerable Kenyans from losing their livelihoods with direct welfare cheques.

Tourism retail and trade have been worst hit by cancellation of bookings, restrictions on movements and operational times by imposing a dusk-to-dawn curfew, and the impact is set to persist after President Uhuru Kenyatta extended the partial lockdown for another 30 days.

Generous income, sales and value-added tax cuts to help ordinary households navigate the ravages of the pandemic, which has already claimed 89  lives in the country, have created a Sh172 billion unfunded budget hole.

Millions of jobs have been swept away and for those workers who survived the redundancies, their incomes have been slashed as employers seek to remain afloat.

Even as the government loses revenues it has been forced to commit extra resources, including a Sh54 billion stimulus package to tackle the impact of the disease in the current and into the next financial year, which begins on July 1.

That comes on the back of the mounting debt repayments schedule set to hit Sh823 billion.

While Paris club of G20 countries and China have offered different debt relief packages that could save Kenya some of the cost of financing repayments, the Treasury has expressed caution over implications of the relief.

Hence, Kenya may still have to spend nearly half of its entire revenues to pay debts.

Yesterday, Yatani spent hours appraising his boss, President Uhuru Kenyatta, before making known how, if at all, his Budget would tackle these glaring imbalances amid the unfolding calamity.

Officials aware of Yatani’s schedule told The Standard about the frantic moments with the pull and push between his office and the National Assembly, which is the ultimate authority in the budget-making process.

It was not immediately possible to get through to the CS who has previously shown his hand on how the taxation regime would change in his Finance Bill, which outlines how the revenues would be raised.

In April, he announced that the government will no longer give tax incentives to the rich as part of how the revenues would be raised.

National Treasury is, however, optimistic to ramp up an additional Sh117 billion from wealthy individuals and industries through a modest reversal of tax exemptions.

The areas being targeted include buying of helicopter engines, which had been exempted from tax, yet it has had little meaningful benefits to ordinary citizens.

Sectors likely to be hit most by the mass repeal of tax incentives as Treasury moves to shore up its coffers include agriculture, manufacturing, education, health, tourism, finance, social work and energy.

Mr Yatani told The Standard then that the government had been giving tax incentives valued at Sh535 billion, which had not translated into remarkable improvements in investment and employment.

“We are trying to avoid a situation where the ordinary person will be affected,” he said, noting that they will instead be going after heavy expenditures such as hiring of helicopters in what is likely to hit politicians, most of who are fond of hobnobbing around the country by air.

“You buy an engine for a plane we charge no taxes. And if you ask how the ordinary mwananchi is going to benefit it is not much,” said Yatani.

However, Treasury has come under fire for taking advantage of the current economic crisis to introduce what analysts say are sweeping tax changes that have little bearing on the ongoing stalemate.

Indeed, the re-introduction of the 14 per cent value-added tax (VAT) on cooking gas might hit the very poor the government is trying to protect.

Following the ban on logging and introduction of the anti-adulteration levy, ordinary Kenyans have shifted to cooking gas.

Even those selling land or homes will also have to pay a five per cent capital gains tax, a move that analysts say will discourage investments, with most people opting to sit on their property rather than sell them.

However, Yatani was bullish that some of the things they are reversing have had no benefit to mwananchi.

“So these are things that we are reversing because we realised that the benefits which were intended to be facilitated and passed on to the ordinary people are not done. You just balloon their profits and not going to the citizen,” he said.