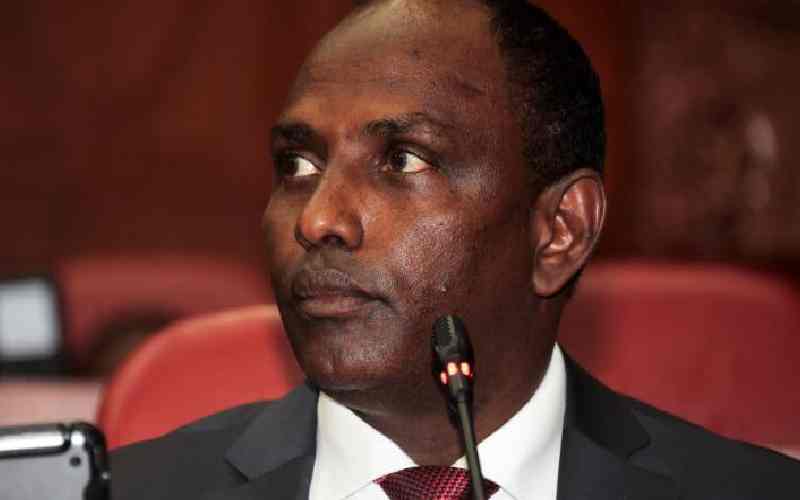 Kenya’s economy will grow by a revised rate of 2.5 per cent this year on account of the devastating impact of Covid-19, the Treasury has said.

The projection is the first formal illustration of how the coronavirus is impacting on the economy, including the severe shortfalls in tax collection, which is the fairest indicator of how an economy is faring.

Treasury Cabinet Secretary Ukur Yatani (pictured) told legislators in his explanatory notes of last week’s Supplementary Budget that the growth rate could hit three per cent in the best-case scenario.

He attributed the slowdown to the closure of borders after the first positive Covid-19 case was confirmed in Kenya on March 12, hurting the pillars of the economy that include tourism, agriculture, manufacturing and trade.

It would be the worst year for the country since 2008 when the post-election violence that followed the 2007 presidential polls crippled the economy.

Mr Yatani’s prediction is the most bullish yet. Global institutions issuing country-specific estimates have indicated a possible 1.9 per cent growth for Kenya.

The World Bank has indicated that Covid-19 will push sub-Saharan Africa, where Kenya is among the biggest economies, into its first recession in 25 years.

“If the extreme shock persists, growth is likely to drop further to 2.5 per cent as global demand remains weak,” the CS wrote to the National Assembly.

“Considering the foregoing developments, the preliminary growth forecast for 2020 is projected to decline to around three per cent.”

Prior forecasts said the economy would expand by 6.1 per cent, but that was before the global pandemic broke out to devastate all sectors.

Yatani did not, however, indicate when his ministry expects normalcy might return. Globally, no one has given predictions on how the pandemic would evolve or even whether it would take weeks or months to subside.

But as it stands, severe travel restrictions have led to the closure of several sectors, including hospitality where nearly all hotels have shuttered and sent their workers home on unpaid leave.

McKinsey & Company, an American management consulting firm, in its projections on the health of the Kenyan economy earlier in the month put the growth rate at a paltry 1.9 per cent.

It cited reduced household and business spending, disruptions to supply chains for key inputs in machinery and chemicals, and tourism as the sectors where the economy would hurt the most.

A push by the government to stop the spread of the virus informed the decision on social distancing and the ban on gatherings, disproportionately hurting the hospitality industry.

Tourist numbers have fallen dramatically, Yatani said, a situation that is directly attributable to the closure of international travel by almost all countries.

Agricultural exports have drastically fallen, specifically flowers, which are a major commodity that earns the country more than Sh100 billion a year.

“The agriculture sector has further been affected by the low global demand for agricultural exports especially horticulture (fresh produce), tea, coffee among others,” the CS wrote in his memo.

South African Airways (SAA) is set to lay off all of its employees at the end of April.

By Moses Omusolo | 14 hours ago