Who will be smiling to the bank after Uhuru’s latest stimulus package? 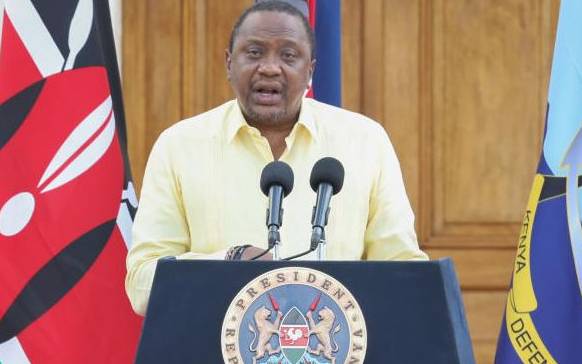 A lot of Kenyans now fear for their livelihoods as much as they fear for their lives. As millions submit to government’s persuasion to stay at home - away from their workstations, tea parties, nightclub and salons where the deadly coronavirus is lying in wait - they are also worried about their future.

Hundreds of thousands of hotel and nightclub workers have already lost their jobs. Millions of others are not even sure if they will ever return to their offices, factories or market stalls.

Analysts have ruled 2020 as a dead year. The economy -  which includes buying her a movie ticket, watching an English Premier League match with friends in a pub, closing a deal over a cup of tea - will either stagnate or contract. It might be the worst year since independence.

President Uhuru Kenyatta (pictured) and his Cabinet know there is not much they can do forestall an economic crisis. But they are determined to make it less painful.

Theirs is a battle to preserve the soul of a country. To ensure the virus does not leave behind a broke Kenya. Because a broke Kenya will be a sick Kenya.

On Tuesday, the Cabinet Secretary for National Treasury Ukur Yatani tabled a mini-budget in Parliament. The State has foregone Sh172 billion in taxes as it seeks to ensure that despite the masks in their faces, Kenyans can still smile all the way to the bank.

But who will have the brightest smile?

1.   Banks and other local creditors

Perhaps the biggest beneficiaries in this crisis are banks. Perhaps not. After the Central Bank of Kenya freed up Sh35 billion by reducing the Cash Reserve Ratio and slashed its benchmark lending rate by a percentage point, Treasury has also decided to pay them up an additional Sh100 billion in interest on the debt. Although other investors such as pension funds and insurance companies will also benefit, commercial banks will be the main beneficiaries. Banks control about 54 per cent of the total domestic debt, which puts them at pole position to benefit from this additional payment.

By the end of June, the government will pay an additional Sh111.3 billion as principal and interest on the internal debt. Initially, Treasury was going to redeem local debt of about Sh123.6 billion. This will increase to Sh223.6 billion, while interest on the local debt will go to Sh301.8 billion.

With all this cash, the Government expects banks to lend more to businesses and individuals in distress. Even if they can’t lend, they can at least give borrowers some reprieve on repayment knowing their vaults are brimming.

Some permanent employees will not be so lucky to still have their jobs when this disease dies down. Even those who remain in their employer’s payroll will be lucky not to have suffered a pay-cut. Nonetheless, those who will still have their jobs will enjoy a small relief on their income tax known as pay-as-you-earn (PAYE). The government has waived PAYE for those earning a gross salary of Sh24,000 and below, to offer relief against the Covid-19 pandemic. Those earning more than Sh24,000 will get a five percentage point reprieve, paying 25 per cent for PAYE.

Of course, corporate income tax, which is charged on profits, has also been slashed by five percentage points to 25 per cent, while turnover tax levied on small businesses with revenues of less than Sh5 million was cut from three per cent to one per cent.

The infrastructure budget has gone up to Sh48 billion. Much of this cash will be used to construct low volume sealed roads or simple all-weather roads that only allow for mobility, especially in rural areas. You don’t need international contractors, but small-scale local contractors can do the job just fine. The emphasis is on the use of light machinery and manual labour in upgrading the roads. According to the International Labour Organisation, by introducing labour-based work methods, more employment can be created and more cash income can be offered to job-seekers in the communities for which the infrastructure is intended.

Teachers take a huge chunk of the government’s wage bill. And that is because they are many - about 315,000. A teacher’s salary, like that of any other employed Kenyan, is used to feed his immediate family and other dependents. But so many teachers with money in their pockets translate into increased consumption, which is what President Uhuru Kenyatta’s Government is trying to achieve. And that is why teachers were given an additional Sh3.3 billion.

Just like teachers, lecturers have also been given an extra Sh8.2 billion for their current expenditure. It is not immediately clear why lecturers got the money, but there was a pending collective bargaining agreement that the Government had not honoured.

More than half of Kenyans either grow crops or rear livestock for a living. A number of crop growers depend on government for cheap fertiliser and seeds. That is why the additional Sh12.7 billion to the State Department for Crop Development is critical, especially now that the government plans to feed a lot of poor people that will be affected by the pandemic.

The social protection department has been allocated an additional Sh10 billion. “It is not only about people who have been on a cash transfer basis, but also new areas like slums,” said Yatani. The CS noted that modalities were being worked out on how the government can buy food for the urban poor. While most economists and policymakers endorse cash transfers, there are fears that without the right logistics those in need will not benefit.

National Youth Service (NYS) has been given an additional Sh6 billion as part of youth empowerment programme. One of the programmes which saw ablution blocks built in slums, complete with to-pay toilets and other amenities, was championed by the new Kirinyaga Governor Anne Waiguru. However, these NYS projects crumbled under the weight of corruption. About Sh1 billion of taxpayers’ money is suspected to have been siphoned from the programme, bringing one of Jubilee Government’s best projects to near collapse. Uhuru may also fashion his stimulus package for the youth empowerment along the lines of his predecessor Mwai Kibaki known as Kazi Kwa Vijana. But the most important thing is for the youth to get money to spend.

Tourism has been the hardest hit by the coronavirus pandemic with every country announcing travel restrictions. The government has allocated Sh2 billion for the revival of the industry that has been characterised by massive lay-offs.

About Sh1 billion has been appropriated to hire medical professionals who will help to contain the spread of the disease caused by coronavirus. It targets mostly nurses.

He says Treasury will repeal major tax exemptions on key items such as helicopter engines among other reliefs.

By Sara Okuoro | 4 hours ago