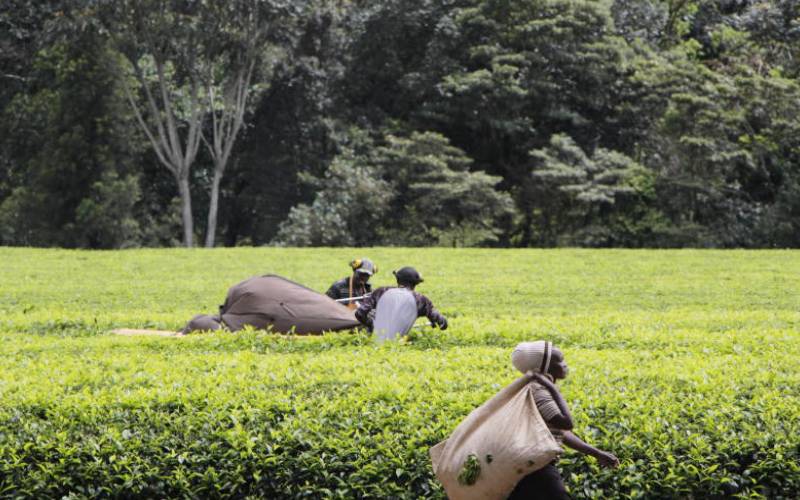 The tea industry is set for radical changes if directives issued yesterday by President Uhuru Kenyatta are implemented.

The industry has been grappling with numerous challenges ranging from corruption in the agencies that manage the industry to the proliferation of brokers who make a killing at the expense of farmers.

These have resulted in declining earnings for farmers, with last year having had the worst returns for farmers in close to a decade. Low earnings have seen frustrated farmers uproot tea bushes.

In an attempt to turn the tide and save the crop, which is a key foreign exchange earner for the country, President Kenyatta ordered the Ministry of Agriculture, the Attorney General and the Competition Authority to streamline operations within the sector.

The agencies were directed to put mechanisms in place to lock out brokers from selling tea as well as to limit sale to only farmers who are registered tea growers.

There will also be restructuring in the Kenya Tea Development Agency (KTDA) after Uhuru cited the firm for being partly responsible for farmers’ woes owing to mismanagement and its opaque nature of operations.

The President said he was keen on changes in tea and other agricultural sectors, adding that it was his intention to “increase the money in the pocket of the farmer.”

He noted while Kenya remained the biggest producer of black tea, farmers had little to show for their effort.

“Lately, the (tea) industry has been experiencing difficulties, particularly with regard to diminished earnings for the farmers ... the key concerns are on low tea prices, delayed payments, low initial payment by KTDA and fluctuations in net income of tea farmers,” said Uhuru.

He continued: “KTDA has delivered a lot of value to farmers in the past but some operational and governance challenges have emerged in the last few years. Key among these is conflict of interest by directors and lack of clarity in the declaration of dividends by subsidiary companies.”

Uhuru said it was “clear the governance of KTDA and entire marketing of tea will require to be restructured if we are to assure our tea farmers get more revenue from their tea sales.”

There was uproar last year in tea-growing regions when KTDA announced a 25 per cent dip in earnings for the 2018/2019 financial year. Farmers whose produce is sold through the agency earned Sh46.45 billion compared to Sh62 billion over a similar period in 2017/2018.

The last time tea earnings were this low was in 2014 when farmers earned Sh35.5 billion. Payment to smallholder tea farmers is done in two tranches, with an initial payment made every month while a final payment is made after the close of the financial year, usually around October.

This second payment – known as the tea bonus – is popular and usually brings life to tea-growing regions. Last year, however, this payment dipped 36 per cent to Sh28 billion, compared to Sh46 billion in the previous year.

Uhuru also wants KTDA to pay farmers at least 50 per cent of their deliveries as monthly (initial) payments while the balance will be paid as annual bonus. Last year, KTDA paid about 36 per cent (Sh17 billion) as monthly payments while the balance of 64 per cent (Sh28 billion) was paid as annual bonus. In a statement, KTDA said it was ready to “work with the various State agencies as directed by His Excellency the President.”

Uhuru also decried the control that middlemen have over farmers, noting while farmers could be earning up to Sh91 per kilogramme of tea, they were making Sh41 while the balance of Sh50 – more than half – is taken to brokers.

The President now wants State agencies to rein in the unscrupulous businesses and individuals that do not own farms or grow tea bushes but end up earning more than farmers.

“I hereby direct the Competition Authority to take decisive action to bring these practices to an end. I further direct the Ministry of Agriculture and the Ministry of Trade to take immediate measures to ensure that each of the subsidiaries has separate governance structures; and that the profits from each of the subsidiaries is reflected in farmers’ incomes,” he said.

The President also directed the AG and the Agriculture ministry to finalise and gazette the newly developed Tea Regulations 2019 within two weeks. The new laws will enhance value addition as well as set up the Kenya Tea Council, which will set limits of tea that can be sold through direct contracts to 20 per cent while the rest will be sold through the tea auction.

Away from the lakeside, banana farmers from Gusii region were also hopeful.

By Moses Omusolo | 6 hours ago