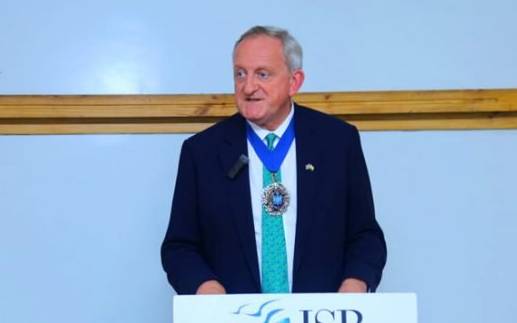 The UK government through Lord Mayor of the City of London, Alderman Peter Estlin (above) has announced Sh1.15 billion support for Kenyan fintech companies.

Mr Estlin arrived in the country on Wednesday for a two-day visit and he met a group of fintech innovators at Nairobi Garage.

“Today’s announcement highlights the mutual benefits of closer financial co-operation to both the UK and Kenya. By forging partnerships across Africa, the UK’s financial services sector can turbocharge national economies and empower individuals financially, creating thousands of jobs and enriching lives across the continent,” he said while addressing the meeting.

The funds, set be donated by the UK government, are to be channeled to Catalyst Fund, an initiative that supports upcoming fintech companies in emerging markets like Kenya.

The meeting also encompassed business leaders, who came to discuss among other things the upcoming UK-Africa Investment Summit.

He was accompanied by a delegation of some of the UK’s best organisations working across infrastructure, green finance and fintech.

The CEO of BFA Global Amolo Ng’weno lauded the move saying that the funds will be of great benefit to the upcoming businesses in the country.

“In Kenya, access to digital financial services is no longer the major issue - today we need to work toward ordinary citizens improving their financial health, gaining new access to opportunity and accessing basic services,” said Ng’weno.

He added: “Our mission at the Catalyst Fund is to accelerate these startups and strengthen the inclusive fintech ecosystem, and we look forward to working toward this goal with the support of UK Aid.”

“With the UK-Africa Investment Summit only a few months away this visit comes at an exciting time, as we look towards building an economic relationship that prioritises mutual prosperity and sustainability,” he said

The visit will help raise the profile of partnership opportunities between the UK and African countries in the FinTech space, while also helping identify potential investment opportunities in Kenya.

His mayoral theme is “Shaping tomorrow’s City today”, promoting digital innovation and smart cities, alongside the importance of digital skills and lifelong learning, ensuring that we have the talent to support business and innovation into the future, as well as ensuring that no one is left behind.

The Lord Mayor is a senior banker with over 25 years’ experience with Barclays and Citigroup in London, New York, and Hong Kong.

He trained as a Chartered Accountant, becoming a partner with Coopers & Lybrand in 1993 before joining Salomon Brothers Asia, as regional CFO.

He serves on the Audit Committee of HM Treasury and was latterly Chairman of the British Airways International Advisory Board. He served as a Commissioner on both the Royal Borough of Greenwich and pan-London Fairness Commissions, focusing on equality of opportunity in education and housing.

There's more to maize than ugali, ask me how

By Jeniffer Anyango | 23 hours ago

No space? You can grow dhania in your balcony
Feedback