Kwale County government is on the spot after one of its vehicles was on Saturday found transporting charcoal illegally.

The driver of the lorry registration number 02CG035A was found transporting 400 bags of charcoal without valid KRA and Kephis import permits as well as movement permit.

“At about 8 pm on Saturday 14, a Kenya Forest Service ranger attached to Hororo border patrol point received intelligence that there was a vehicle being loaded with illegal charcoal in a bush about 500 meters from the Kenya-Tanzania border,”

“The KFS team acted swiftly and impounded the vehicle which was booked at Lunga Lunga police station under OB number; OB 23/14/3/2020.” 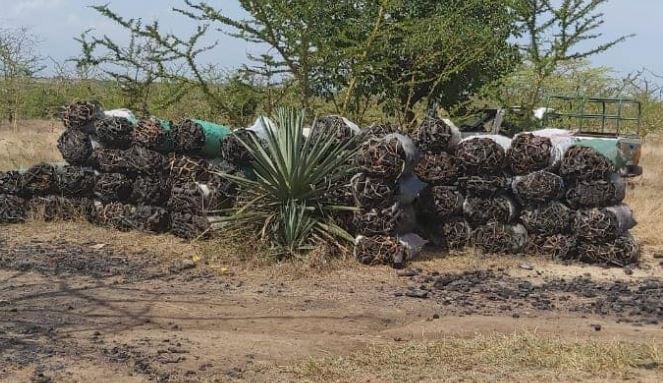 The Chief Conservator of Forest Mr. Julius Kamau said the charcoal was illegally imported from Tanzania where culprits are avoiding the normal channel perhaps to avoid paying taxes.

‘’So they use boda boda and unknown routes then assemble for entry into the country. There were four culprits on this lunga lunga case of 400 bags of charcoal, all were presented to court on Monday each fined 15,000 and the vehicle and the 400 bags forfeited to KFS,” he said.

‘’I wish to thank KFS officers for their renewed resolve, firmness and commitment to ensure that all our forests are safe and that movement of illegal forest products is deterred.’’

Through multi-agency support, a Kenya Wildlife Service lorry is assisting the Service in the recovery of more charcoal produced illegally.

Over the weekend, a Kenya Forest Service led Multi-Agency charcoal crackdown team was at the notorious Ndala area of Taita Taveta county.

A network of cartels and government officials have been blamed for using public resources to ferry charcoal and timber, in violation of the ban on logging imposed two years ago.

In April 2018, Standard reported that atleast five Government vehicles have been seized in separate incidents, ferrying hundreds of bags of charcoal and timber. Reports indicate the racket is thriving, particularly at night, fuelled by the runaway prices of the illicit cargo.

The National Environmental Complaints Committee (NECC) acknowledged that there were growing reports of misuse of Government resources by officials to beat the ban imposed to check the destruction of forests.

"We have been receiving a lot of complaints from Kitui, Kwale, Malindi, Narok, West Pokot, Baringo, and Kericho, where Government resources and officials are purported to be behind the illegal business despite the ban," said Dr John Chumo, the secretary of NECC.

"There is no way a Government will give directives and then go against them. There should be no excuse for those breaching the law, no matter the office they hold," Chumo added.

He also noted in 2018 that complaints of harassment of environmental activists by security chiefs are on the rise, too.

Three crucial calls that could decide the future of football

It is the meeting which will decide the future of football.