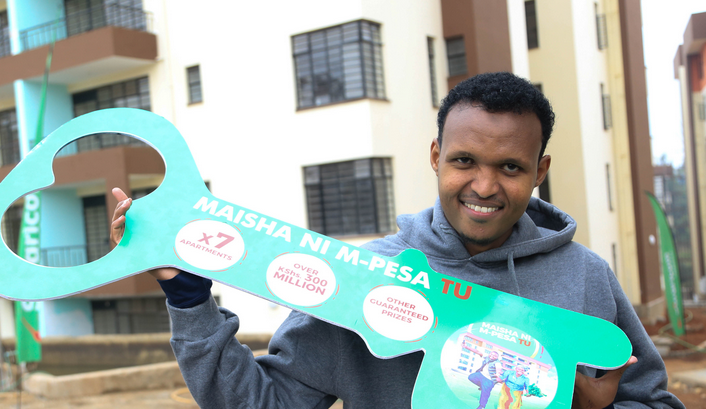 NAIROBI, KENYA: Safaricom has today handed over the seventh apartment worth Sh7.8 million as the Maisha Ni M-PESA Tu promotion draws to a close.

Omar Hassan Muhumud from Eastleigh is the latest homeowner of an apartment located in Nairobi’s Kahawa Estate.

The 27-year-old bachelor works as a supervisor at Neema slaughterhouse in Lucky Summer, Ruaraka.

“I had just arrived at work and I was alighting from a bodaboda when I received a call. I recognized Safaricom’s official number from the advertisements that have been running but I did not know what to expect. Once I was informed that I am the winner of the final apartment, I was excited beyond measure. I have heard about the promotion on radio but I never expected to win anything,” said Omar.

I remember my brother telling me that these were only people operating from the prison who wanted to con me, he added.

Once he receives the keys, Muhumud says he is likely to move in with his family, including the five relatives he currently lives with in Eastleigh’s 12th Street.

M-PESA is an integral part of his life as he uses the mobile money service for both work-related and personal expenses. He uses M-PESA to send his mother, who lives in Mandera, money to cater for her upkeep and medical care. He also uses the service for shopping, making payments and work related purposes such as banking proceeds from sales.

Previous apartment winners include Joseph Kung’u, a clearing and forwarding agent from Riruta, Mzee Juma Saidi, a Kampala-based engineer from Mombasa, Benson Kilonzi, a jua kali artisan from Kitui, Jeniffer Kathure, a Khat trader from Meru, James Njagi, a metal artisan at Gikomba market and Eric Lindenberg, an interior designer who is a resident of Nairobi.

“As the Maisha ni M-PESA Tu campaign comes to a close, I am glad that over half a million of our customers were rewarded for their loyalty to our products and services. We are especially proud to have done a campaign that is sure to transform the lives of the 7 lucky individuals who are now proud homeowners,” said Sitoyo Lopokoiyit, Director – Financial Services, Safaricom.

The eight-week long promotion sought to reward the over 28.6 million M-PESA customers and 150,000 agents with Sh300 million in prizes. Seven lucky customers and eight lucky agents won an apartment and Sh1 million in float respectively.

Mistakes to avoid when naming your business