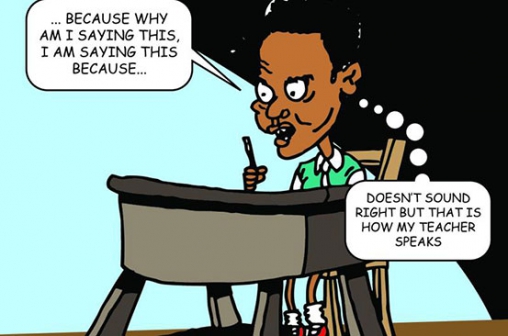 NAIROBI: After a long time, I read compositions by high school students, Form Fours. Some were good while others were nothing to write home about. This was expected, though — talk of the normal curve. What I was most interested in was the creativity and ability to put self-expression to use, and the themes that ran through the students’ narratives. As it were, the learners reflected what is happening in our society today, from corruption to excessive consumption of resources; from abductions to the abdication of duty. Then I noticed something  in many manuscripts by young writers — words that constrict one’s writing and ungainly use of language. The  use of unnecessary words at an early age affects writing at later stages. This is the reason we must mind our language.

Think about your writing. Are there any words that you use that you sincerely think do not add value to your writing? Consider, do you ever use ‘why am I saying this, I am saying this because’? Alternatively, do you ever use the words ‘definitely’ without proper cause? I remember visiting a school one time and noticed that the teachers and the learners referring to the learners and ‘studients’ instead of ‘students’ and no one seemed perturbed! Unfortunately, the learners thought this was the proper pronunciation of the word.

I have a friend who keeps using the words ‘perhaps’ in most of the statements he makes and another who can’t avoid ‘as I said’ in his writing. These words do not add value yet we keep on using them. A good writer should avoid them. How often are we told to avoid clichés? Well, clichés are not just those old, tired words or expression like the simile ‘as black as a pot’. They include meaningless expressions that we often find ourselves using in our writing.

Consider the words ‘usually’ and ‘then’. These should be used sparingly; they tend to irritate the reader when overused.

Twins beat the odds to score impressive ‘B’

I find it absurd

Teachers of English should avoid putting statements in learners’ minds. I was a bit surprised that most of the compositions started with ‘It was Saturday’, which is a common thread in the manuscripts I receive from young writers. Many will start with ‘It was early in the morning,’ as if all action starts with this cliché! Surely, an interesting story should be spontaneous; blow the readers out of their comfort zones and command them to pay attention. I find it absurd that we tend to force narratives to start, flow and end in the same way. This equals boring.

From my reading, I also noticed that our daily speech usually intrudes in our writing. This is something writers should avoid unless of course you are using it to add flavour to the story or bring out certain traits of a given character. If not it will make your writing hard to follow. Consider this, “So told him to co ... come, and I showed him how to live in town.” This phrase is a direct translation from a sheng’. It is very ungrammatical and does not fit in English. A good writer decides on what language he or she uses. At the same time, he or she practises to get better at the chosen language.

Further, assuming that all readers know what you are writing about is wrong. From the outset, the writer should always know that if he or she has a story, then it is up to them to make the reader experience the said story. The onus is on the writer to take the reader to that faraway land where sorcery is the order of the day with people performing magic that turns people into anthills. This is only possible if proper language is employed. Can you imagine how hard it would be for us, say in Kenya, to understand Nigeria if writers like Elechi Amadi didn’t build images in our minds that caused us to imagine and see how Amadioha — the god of thunder among the Igbo — struck people in The Concubine? How about experiencing snow or the effects of an atomic bomb?

Good writing hinges on a good command of the language. It is, therefore, important for the Kenyan writer to aspire to use language so well that a reader in say Russia, can ‘see’ city council askaris chasing a helpless woman of MCA fighting in their assembly. As a writer, mind your language and you might just take your writing a notch higher.

Opposition got it wrong by disrupting Uhuru speech

If there is one thing you’ve got like about Kenyan politicians, it has to be the comical way they try to turn around an embarrassing moment into one of heroism.

A banner year for film
.