Visa issues: Omanyala's spokesperson gives update ahead of World Championships in US

Africa's fastest man Ferdinand Omanyala is doubtful to compete at this week's World Championships in the United States because the Kenyan sprinter is facing visa issues, his spokesperson said on Wednesday.

Omanyala set the African men's 100 metres record after clocking a time of 9.77 seconds at the Kip Keino Classic meeting in Nairobi in September 2021.

The Kenyan sprinter has been included in the entry list for the 100m event at the World Championships, which begin in Eugene, Oregon on Friday.

"Ferdinand is still waiting for his visa or alternative clearance to depart from Nairobi," a spokesperson for Omanyala told Reuters.

"It is frustrating but he remains hopeful to make the trip."

The 26-year-old won the African 100m title last month and was the first Kenyan to qualify for the Olympic 100m semi-finals in Tokyo last year.

On Wednesday morning, Africa's fastest man Omanyala took to his Instagram page, and  wrote: "Sad that I haven't traveled Oregon yet and 100 M is in 2 days. Visa delays!!! " 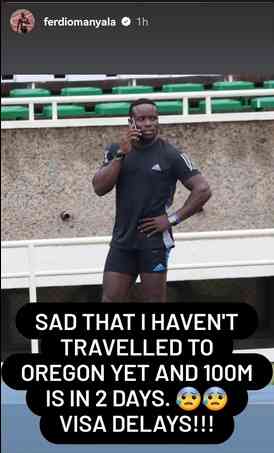