Rough road ahead as Kenya moves to remove fuel subsidies

Motorists should buckle up for a bumpy ride ahead.

This is after the National Treasury announced that it would soon begin phasing out a fuel subsidy programme that has cushioned motorists from the shock of the high prices of petroleum products.

In a statement, the National Treasury attributed this to the inefficiency of the protective measures, which it insists might have benefited the rich at the expense of the poor.

This is after the National Treasury announced that it would soon begin phasing out a fuel subsidy programme that has cushioned motorists from the shock of high prices of petroleum products.

In a statement, the National Treasury attributed this to the inefficiency of the protective measures, which it insists might have benefited the rich at the expense of the poor.

Moreover, said Treasury, if the fuel subsidy is maintained it is likely to aggravate the country’s debt situation as it surpasses its allocation in the budget.

"For this reason, a gradual adjustment in domestic fuel prices will be necessary in order to progressively eliminate the need for the fuel subsidy, possibly within the next financial year,” said National Treasury Cabinet Secretary Ukur Yatani in a statement yesterday.

In the next financial year starting July, the National Treasury has allocated Sh100 billion for the fuel subsidy. This comes a day after a review by the Energy and Petroleum Regulatory Authority (Epra) showed that prices of all petroleum products rose by Sh9 a litre, with the subsidy helping motorists from paying a record pump price of Sh184.68.

Instead, a litre of super petrol will retail at Sh159.12 in Nairobi in the next 30 days, and over Sh160 in remote areas. A litre of diesel, used to power heavy-duty vehicles and machines, will retail at Sh140 in the capital city. Without the fuel subsidy, the pump price of diesel would have been Sh188.19.

A unit of kerosene will retail at Sh127.94, up from Sh118.94 in the period between May 15 and June 14. Kerosene is popular among the poor who use it for cooking and lighting.

The move to phase out the subsidy is likely to raise a storm given that Kenyans are currently grappling with a high cost of living that has seen the price of goods and services increase by a rate of 7.1 per cent, the highest since February 2020.

However, Mr Yatani noted that while the subsidy has afforded Kenyans cheaper fuel compared to their peers in Uganda, South Africa, Zambia and Rwanda, it has come at a cost.

He argued that the subsidy was not well designed and tended to benefit the rich, closing ranks with the International Monetary Fund (IMF) which had earlier called for the scrapping of the subsidy for being retrogressive.

“Fuel subsidies are inefficient and often lead to misallocation of resources and crowding out of public spending on productive sectors, resulting in unintended consequences such as disproportionately benefiting the well-off,” said Mr Yatani in a statement.

The fuel subsidy was allocated an additional Sh37.8 billion in the second supplementary budget for the financial year 2021-22, as the government tries to cushion motorists from a spike in prices of petroleum products owing to the Russia-Ukraine conflict. ​

Besides the Ukrainian war, the lingering effects of Covid-19 have also aggravated the oil situation around the world with a barrel of crude oil now selling at over $112.48 (Sh13,148).

The money that will be released by ending the subsidy, Mr Yatani said, will be used for more targeted spending such as supporting the most vulnerable, fertiliser subsidies, universal healthcare, and free primary and secondary education.

Consumer Federation of Kenya Secretary General Stephen Mutoro said the government should have removed the subsidy a long time ago because "the subsidy does not reach the targeted people".

He, however, took issue with Treasury’s pronouncement that it will move freed-up resources to other areas, saying it does not have such powers.

Mr Mutoro said the law is clear that the money, which is contributed by motorists paying a levy of Sh5.40 on every litre they consume, should be used for stabilising petroleum prices.

“Where do they get the power to decide how to shift the resources?” wondered Mutor, adding that all the money that has been used for subsidy should be accounted for. 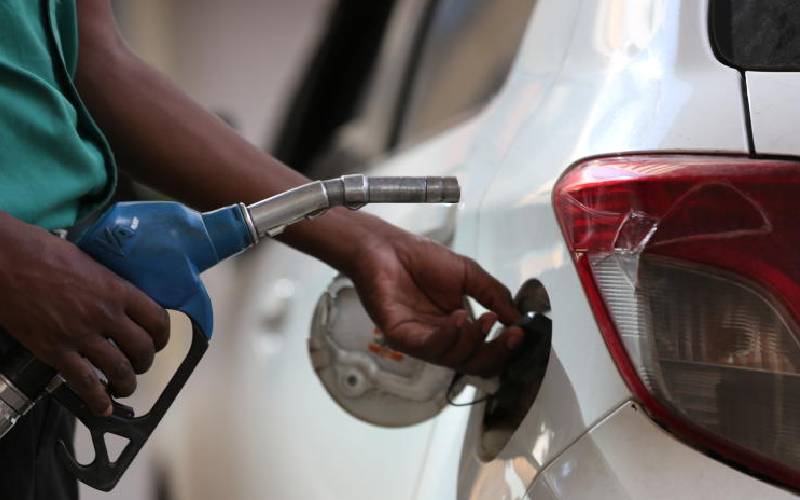 More pain at the pump as fuel prices rise by record Sh9 a litre
A litre of super petrol will retail at a record Sh159.12 in Nairobi and about Sh161 in far-flung areas in the next 30 days.
Business
By Dominic Omondi
2 months ago

Premium With kerosene cheaper, prepare for adulterated petrol
The huge subsidy has made the cost of kerosene considerably lower compared to that of diesel and super petrol.
Financial Standard
By Macharia Kamau
2 months ago
.