By Philip Muasya | 6mos ago

Former Lugari Member of Parliament (MP) Cyrus Jirongo on Thursday suggested that Musalia Mudavadi joined hands with Deputy President William Ruto for selfish gains, and not out of the need to transform Kenya.

The ex-lawmaker linked Mudavadi to past corruption scams, which saw the taxpayer lose billions of shillings.

One of the scandals Jirongo mentioned is the Goldenberg saga, which Mudavadi maintains innocence on, and is on the record saying he actually stopped the scandal when he was the Minister for Finance.

According to Jirongo, the scam “nearly brought Kenya to economic paralysis”.

“You mustn’t think about your stomach only when striking political deals,” Jirongo said, referring to Mudavadi’s latest pact with DP Ruto.

Last Sunday, Mudavadi pulled a shock move when he announced during the Amani National Congress (ANC) national delegates conference that he was teaming up with Ruto ahead of the August 9 polls.

Since then, Mudavadi has been on the receiving end from his former One Kenya Alliance (OKA) co-principals, who accuse him of betraying the coalition’s cause.

Jirongo, the latest addition in the OKA matrix, claims Mudavadi is using the Luhya community as a bait.

The Kitui rally was also attended by businessman Jimi Wanjigi, who maintained he was firmly in Orange Democratic Movement (ODM) Party, and that Raila Odinga remains his Party leader.

Wanjigi, however, urged the ODM chief to support other like-minded presidential hopefuls in the race for presidency.

"We have helped Raila [in his presidential quest] for so many years. It cannot be him every other time. This time around, we will support others, even Kalonzo is fit [for the job]," said Wanjigi.

In his speech, Kalonzo said Mudavadi bolted out of OKA because he (Mudavadi) knew that he stood no chance of becoming the coalition’s flag-bearer.

"They knew I was to be the OKA flag-bearer, and felt they could not stand it. It was very clear, but I wish them well," said Kalonzo.

On his part, Gideon Moi urged the Kamba community to rally behind Kalonzo in the upcoming polls.

"OKA is strong, and we are [rallying] behind Kalonzo. We plan to secure Round One victory [in the presidential election],” said Gideon.

Premium Health: Why is everyone in glasses?
Health & Science
By Valentine Zablon
1 hr ago
Premium Why the media is reckoning with a trust-deficient Kenya
Andrew Kipkemboi
By Andrew Kipkemboi
1 hr ago
Premium Raila Odinga beats William Ruto in the battle for Nairobi parliamentary seats
Nairobi
By Jacinta Mutura
1 hr ago
VAR denies Man but not Bayern in 2-0 win over Wolfsburg
Football
By Associated Press
1 hr ago
. 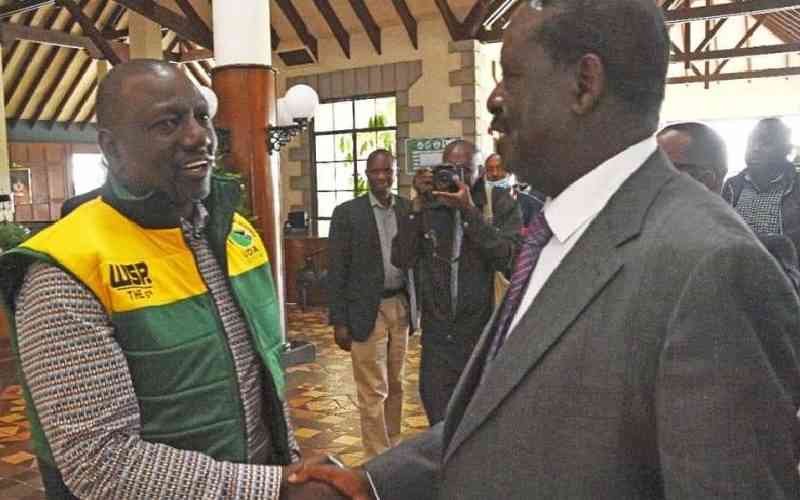 By Mate Tongola 19 hrs ago
Igathe, Omanga concede after a tight race in the Capital