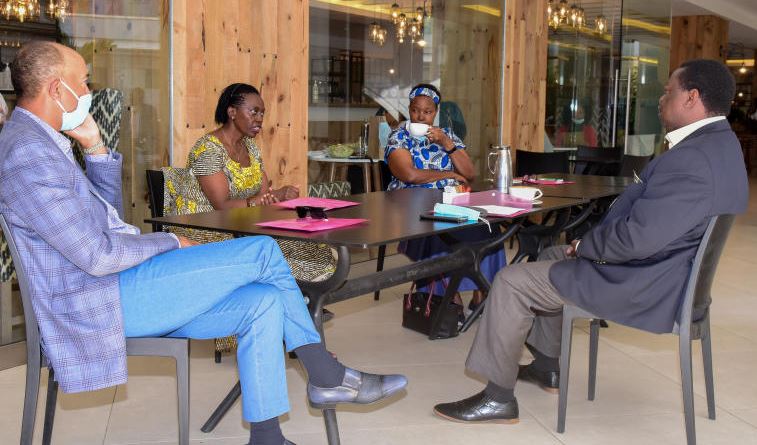 A series of high-profile political meetings hosted by Amani National Congress (ANC) leader Musalia Mudavadi have stirred talk of a possible new political alliance. Mudavadi, who has publicly declared his interest to succeed President Uhuru Kenyatta, has in the last couple of days held meetings with leaders from across the political divide. The meetings at his private office in Nairobi’s Lavington, and City hotels have triggered speculation that Mudavadi could be out to cobble a new political alliance for the next presidential contest in 2022.

The development comes in the backdrop of a fallout between President Kenyatta and his deputy William Ruto, in what observers say could leave the presidential contest wide open. Ruto had been seen as heir-apparent, but the fallout has dealt his bid to succeed Uhuru a big blow and given other politicians a better chance of winning the top seat. Yesterday Mudavadi hosted Narc-Kenya leader Martha Karua, Peter Kenneth who contested for president in 2013 and former Head of Civil Service Sally Kosgei. Peace accord Mudavadi, Karua and Kosgei were part of the 2007/2008 peace accord that brought retired President Mwai Kibaki and Orange Democratic Movement (ODM) leader Raila Odinga together after a disputed presidential election.

In the last couple of days, Mudavadi has held separate talks with his Ford-Kenya counterpart and Bungoma Senator Moses Wetang’ula, Kiambu Senator Kimani wa Matangi, Uasin Gishu Governor Jackson Mandago, MPs Didmus Barasa (Kimilili) and John Waluke (Sirisia). Barasa said his discussions with Mudavadi were around the succession politics. “What we discussed is still confidential, but I can tell you that it was about 2022 succession politics and the future seems bright,” said the first term MP. The talks centred around the political scene, state of economy as well as the country’s legislative agenda of restoring the economy that has been battered by the Covid-19 pandemic. Contacted yesterday, Mudavadi said his engagements were aimed at seeking solutions to the a myriad of problems facing Kenyans. His allies, however, said the former Sabatia MP was in the race to consolidate support across the country by bringing in more leaders to his fold. They revealed that the ANC leader recently held a meeting where the party gave him the go-ahead to forge alliances with other political parties and figures ahead of 2022. In a phone interview with The Standard, Mudavadi said he was focused on succeeding Kenyatta. It will be his second time to run for the top seat having unsuccessfully contested in the 2013 General Election. “I must engage broadly and widely with leaders and Kenyans from across the divide. No one should shy away from having political consultations because Kenyans need unity of purpose,” said Mudavadi. “Kenyans would wish to see an alternative leadership; people with agenda that focus on the needs of the people,” he added. Mudavadi said the country should not be boxed into politics of bitter rivalry, saying the next presidential contest should be about policies that can turn around the country’s economy. “The contest should be about the interests of the people of Kenya. Political rivalry should not cloud policy issues and formulation,” Mudavadi said. According to ANC deputy party leader and Lugari MP Ayub Savula, the party is in the process of engaging other political leaders to back Mudavadi’s 2022 bid. “The focus is 2022. We had a meeting and have agreed that he negotiates with other political leaders across the board. We are consolidating support for the purpose of the next General Election. We expect more politicians,” said Savula. The party’s Secretary General Barrack Muluka remained cagey about Mudavadi’s engagements but revealed that more meetings were on the way. “They are talking. A lot of things are happening and more will be happening in the coming days. I will not delve into the details because it will then stop being a strategy,” said Muluka. Mudavadi has recently projected a lone voice, putting the government on its toes in the deserted Opposition field. Analysts say that with vocal politicians and alternative voices in civil society caught up in “handshake” politics and Covid-19 storm, Mudavadi has cut a niche for himself as the only credible Opposition voice left. Alternative voice From the Judiciary to education, foreign affairs, debt issues to post-Covid-19 economic stimulus, the ANC leader has put the government’s performance in a spot. Political analyst Javas Bigambo says Mudavadi is in his top political form as the alternative voice in a country where the Opposition is on its deathbed. “At the time ODM leader seems to have mellowed and joined hands with Kenyatta, Mudavadi could have seen a vacuum and decided to fill it. It will definitely give him a good springboard and rejuvenate and widen his support base,” said Bigambo. Recently, the former Finance Minister has taken on the government on the growing national debt and its effect on the economy. “The debt issue is one of our weakest links as a country,” he said.