The Amani National Congress leader Musalia Mudavadi and Bungoma Senator have ‘skipped a western region leaders meeting held today, at the Central Organization of Trade unions (COTU) Secretary General Francis Atwoli’s home at Ildamat in Kajiado County. Asked why the two leaders did not attend COTU Secretary General Francis Atwoli swiftly responded that despite their absence, the leaders were together in their resolutions. This is yet to be confirmed by the duo. “They were not part of this meeting, they did not attend, but they… they are with us,” said Atwoli. The meeting which was termed as a critical rejoinder by the Mulembe nation to fill in the fault lines in western Kenya, also saw several leaders coroneted as the spokespersons for the larger Luhya community.

Kakamega County Governor Wycliffe Ambetsa Oparanya, Devolution Cabinet Secretary Eugene Wamalwa, and COTU Secretary General Francis Atwoli, were proposed for the role.  “These leaders will be negotiating with the National Government for Development and other communities, in forming a new and transformative Kenya that is all-inclusive,” said the new ODM Deputy minority leader Dr Eseli Simiyu Kakamega Senator Cleopas Malala and his counterpart from the National Assembly, Navakholo MP, Emmanuel Wangwe will also lobby for the community’s positions in the parliamentary re-alignments.  “We want the president to consider the region in the ministerial appointments and other state jobs as they may occur,” said Malala The meeting which was attended by several Governors, 34 MPs, and six senators also resolved to support the BBI agenda by President Uhuru Kenyatta and Orange Democratic Party (ODM) chief Raila Odinga.

Similarly, the leaders outlined a list of projects that they hope they will benefit from President Uhuru Kenyatta’s government. They include agricultural and infrastructural developments in the region. 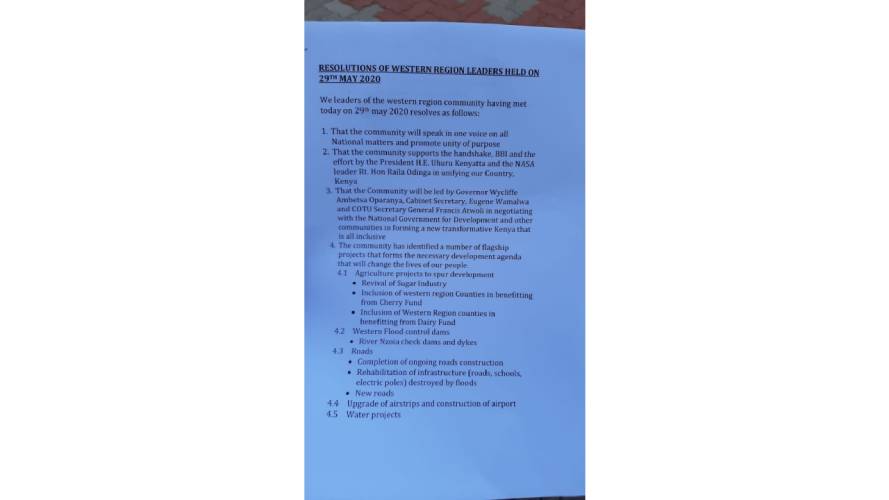 Some of the proposed projects include the revival of sugar companies, western region floods control by the construction of dykes and dams, completion of road networks among others. The meeting comes as the western region seeks to solidify its prospects in the 2022 General Elections by taking advantage of the current shakeup in parliament. The purge in both the Senate and the National Assembly has seen bigshots in politics fall, paving way for new faces in top house leaderships.

First was the Jubilee political fumigation that saw the former Senate Majority Leader Kipchumba Murkomen lose his Majority leader position. Others felled by the Jubilee sword include Nakuru Senator Susan Kihika who was de-whipped from the Senate Majority Whip position. The two positions were filled by the new Senate Majority Leader Samuel Poghisio (Kanu, West Pokot) and the Murang’a‘s  Irungu Kang’ata as the new Senate Majority Whip. The move was then followed by the landmark removal of Senate Deputy Speaker Kithure Kindiki. Other casualties who followed suit included the Nandi Senator Samson Cherargei, Bomet Senator Dr. Christopher Lang’at among others who were ousted from key committee posts.

The Orange Party also, taking a cue from their newly found allies, purged its house leadership. As usual, it was expected to be noisy, messy. Under the umbrella of the National Super Alliance (NASA), the move saw the vocal Malindi MP Aisha Jumwa, recalled as the representative to the Parliamentary Service Commission and other committees. Jumwa was replaced by her Likoni Member of Parliament Mishi Mboko. Kiminini MP Chris Wamalwa was removed from the Minority Deputy Whip position and replaced by the Ford Kenya Secretary General Eseli Simiyu. According to the Minority Whip Junet Mohammed, the changes were approved unanimously by the Parliamentary group with an attendance of 118 members out of 135 with representation from all the parties under the NASA coalition. Sylvanus Osoro, South Mugirango MP was also removed from the Agriculture livestock committee and the Parliamentary Implementation Committee.

Turkana Central MP Nakara John Lodepe also climbed down the Defense and Foreign relations committee ladder. Similarly, Bungoma Woman Representative Wambilianga Catherine was ejected from the Labour and Social Welfare Committee, Education and Research Committee, and the committee on selection. Others who faced the axe are Nicholas Tindi, Mogaka Vincent, Katana Paul Kahindi, and Mbadi Twalib. “These members have been de-whipped completely, they will not sit in any committee. They have to go through disciplinary action laid down by the coalition leadership and they will not be attending any committee meeting going forward. They are completely isolated they will not be associating with us as NASA Coalition, “said Mohammed. The move has since sparked different reactions from the casualties. While others have decided to swallow the bitter pill, others resolved they would not go down without a fight. Ugenya MP David Ochieng dismissed the move saying his purported removal from the National Assembly Health Committee by NASA was illegal. He argues that he is not a member of the coalition. “NASA cannot take any disciplinary action against me because I am not their member. There is no basis whatsoever, either by law or fact, to even associate me with the coalition,” he said.