Opinion
CS Kagwe creates the impression that the State cares, while the curfew sends a different signal 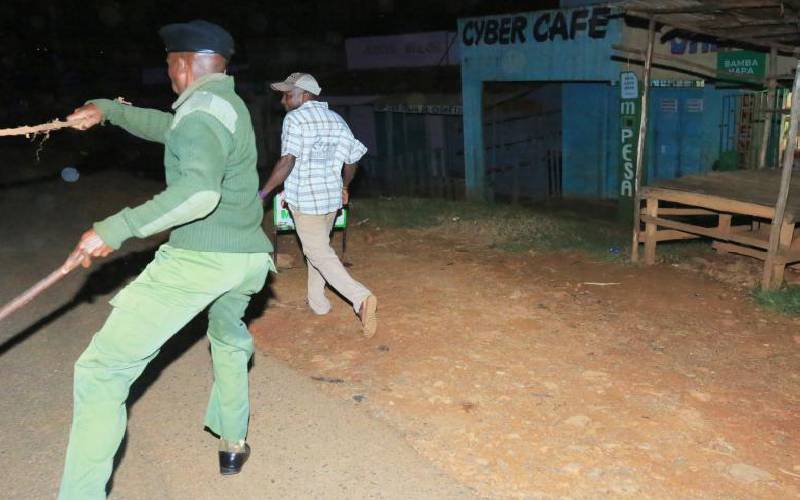 Even my six-year-old daughter knows that it’s probably a bad idea to unleash a swarm of police officers on Kenyans who are already traumatised, not just by the Covid-19 pandemic, but by life in general. It is not rocket science. In fact, it is not even science. It’s common sense, which is clearly not so common in these parts. Life was poor, nasty, brutish, and short, long before this new coronavirus came around. Right now the pandemic may have us bracing for impact but in reality, for majority of the population, every day in this country is a blank page for the authorities to crap on. This first season of “Corona by day, and Corona by night” is sticking to the script. The only thing different is that by day Health Cabinet Secretary Mutahi Kagwe is the face of dignity and decorum. He inspires confidence, gives off serious ‘the Government got your back’ vibes. You know, the whole ‘we’re here and we care’ spiel.

Just do your part, and we’ll do everything we can to protect you. Listening to Mr Kagwe, you get the impression that everything is under control. Yes, there have been some mishaps here and there, but because Kagwe cuts the figure of a man in control, it has been easy to blame the people for not sticking to guidelines. Without taking anything away from the man, it has become very easy for him to treat Kenyans like belligerent two-year-olds who need a map to follow instructions. With respect Which is not to say that we don’t behave like terrible toddlers at times, but that is why we have a parenting authority – more commonly known as the Government. Its job is not to constantly chastise us for being childish, rather it is to create boundaries within which we can safely exercise our freedoms. At least Kagwe treats us with respect, which is more than can be said of the security apparatus which the Government uses to discipline ‘the kids’ when it feels they are out of line.

And herein lies the difference between corona by day, and corona by night. After hours, the other face of the State is revealed. This section of the State only knows how to ‘discipline’ with force, even when punishment is unnecessary. It conquers with brutality and governs with fear. The sad part is that the policemen and women it uses to mete out this violence are traumatised themselves. Traumatised by an unhealthy work environment, poor living conditions, meagre pay, and perhaps most of all, the legacy of colonial policing, which inspires the uniformed forces to be as brutal, heartless, and oppressive as their former white masters. For some police persons – not all of them – beating people who can’t fight back is one of the few opportunities they have to prove to themselves that despite being so debased by ‘the system’, they are still powerful. That by virtue of their uniform, they are at the very least, more valuable than the ordinary man on the street. Ordinary folks But it doesn’t matter what ideological explanations I give for how our parental authority behaves. There is no justification for abusing children, whether you call them residents, citizens, nationals, or udders to be milked until the cow is drained, damaged, and of no use to anyone, for anything.

There’s no two ways about it: The Government owes every Kenyan a duty of care. This means it must serve, protect and provide for all of us, not least of which the most vulnerable in society. The real problem here is that it is so used to serving ‘waheshimiwa’ – including those who have passed away – that it really has no idea how to cater for ordinary folks. It forgets that without the man on the street there would be no reason for governments to exist. See, Covid-19 is a virus that is spread by the type of folks that governments are used to serving. The complication is that the most devastating effects of the pandemic will be felt by the masses. This means that the ruling classes need to grow an empathy bone, and they need to grow it fast. By putting Kagwe on the frontline to talk a good talk, they managed to create a sense of security, but the violence that met workers trying to make their way back home last Friday evening was a clear indication that the message hasn’t quite gotten home. And this is it: This virus is an equaliser, there are no classes here. We are one. Ms Masiga is Peace and Security editor, The Conversation